Taking Stock: Postcard from the Spa 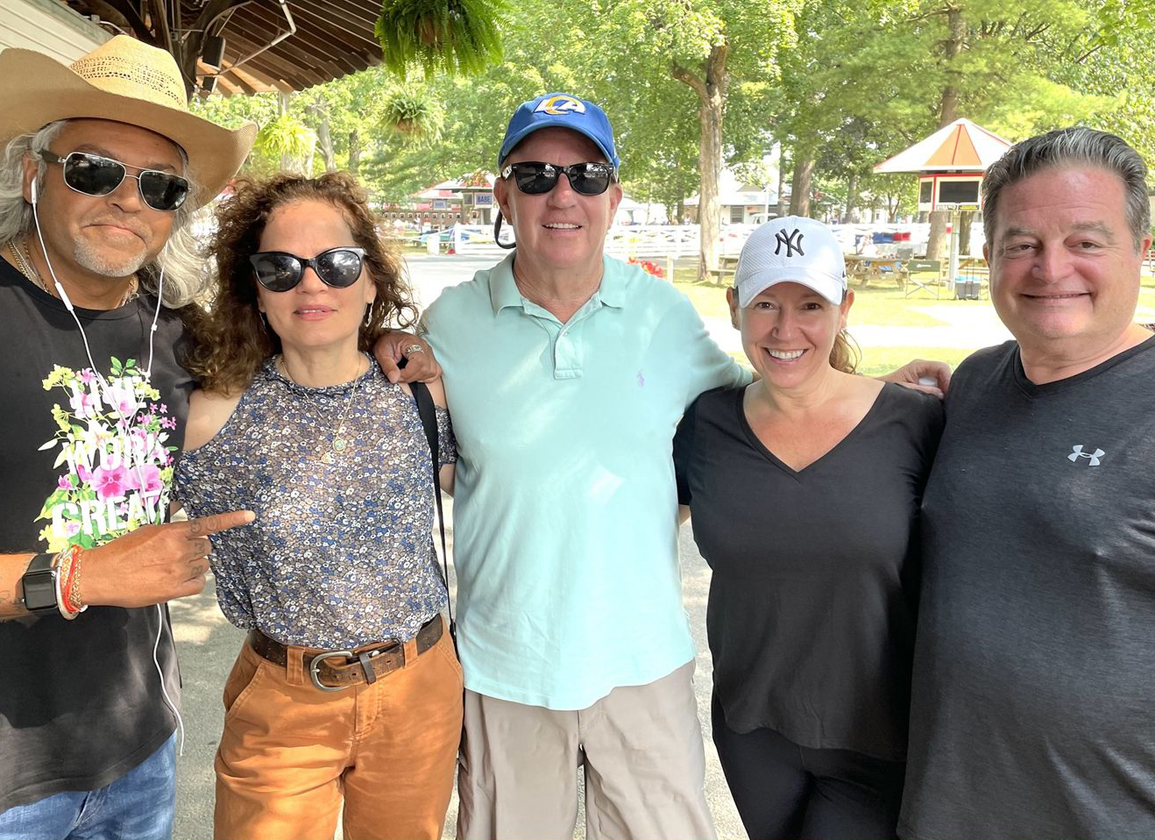 The contrast between NYRA's Saratoga and the Churchill Downs, Inc.-owned Arlington couldn't be greater. While the latter died an ignominious death over the weekend, punctuated by Arlington president Tony Petrillo outrageously booting deadline photographers and writers, including this publication's Alan Carasso, from the press box 90 minutes after the completion of the race formerly known as the Gl Arlington Million, Saratoga–or the Spa, as it's known–is flourishing under solid management. The upstate New York track has been welcoming fans at full capacity since it opened for the season after the pandemic kept them out last year.

I was (literally) at the Spa last week with my wife, Cynthia Colt. Saratoga is a place for top-class racing and is known for its select sale, but if you're a visitor, there's lots to do. Yes, we had a great time at the races and at the Fasig-Tipton selected yearling sale, not to mention several restaurants in and around town. But we also visited the Gideon Putnam's Roosevelt Baths & Spa, for example, where you can soak for 40 minutes in deep bathtubs filled with warm Saratoga mineral water so saturated with salt that your body will feel weightless in it. The rooms are dark, soothing meditative music is piped in, and the overall experience is one heck of a tonic for the body and mind.

Perhaps our spa rejuvenation added to our appreciation for the total Saratoga experience, but there were no surly Tony Petrillos from NYRA management to spoil the visit, either.

Matter of fact, just the opposite; direct from Saratoga's press box, NYRA communications manager Keith McCalmont and his fiancée Bailey Gallison, who works production for NYRA's broadcasting programs, had us over one night for a barbeque at their quaint rental on Lincoln Avenue. If you can wrangle an invitation, do so. We had grilled steaks, vegetables, and corn, a meal as good as any we had on our visit, which also included a pretty good one downtown on the back patio of the Adelphi Hotel on Broadway next door to the more celebrated Salt & Char steakhouse–also a part of the Adelphi.

The Adelphi is co-owned by Larry Roth of LNJ Foxwoods, a prominent stable shared with Roth's wife Nanci and daughter Jaime that's done quite a bit in its short existence since 2012. Among other stakes winners of note, LNJ Foxwoods owned part of 2019 Gl Kentucky Derby winner Country House (Lookin At Lucky) and campaigned the brilliantly fast Eclipse Award winner Covfefe (Into Mischief), who was the champion 3-year-old filly and champion female sprinter of 2019.

We dined at the Adelphi after a Sunday of racing, and it was the place to be seen and noted. In fact, we saw Jaime Roth and some friends breeze through the patio next to our table as if they were late for their next destination. Roth is one of the more active and outspoken owners on Twitter, and she doesn't hide or mince her liberal leanings–Covfefe is named after a Donald Trump gaffe–making her somewhat of an anomaly as a member of the staid The Jockey Club, which has more than a few right-wingers on its bench, including two older women who don't hide their politics on Twitter, either. Good on the TJC, however, for recruiting for membership a young person fairly new to the game and without the typical views and gender. That's progress, right?

Speaking of being politically outspoken, trainer Graham Motion, who's been repeatedly admonished by the Twitterati to “stick to racing,” was at the Adelphi, and I stopped him as he walked by our table with Eclipse Throughbreds' Aron Wellman. I've been a longtime admirer of Motion, both for his skills as a Derby-winning trainer and for his convictions, and it was a pleasure to finally meet him. Motion greeted us warmly, and he looked the part of a cool customer, too, a tall, lanky figure casually attired in an untucked long-sleeved dress shirt and jeans, a contrast to Wellman, who was buttoned up in a dark business suit.

Wellman was dressed as he was because earlier that day Eclipse, a successful racing partnership comprised of many owners, had won the Glll Saratoga Oaks Invitational with Texas-bred Con Lima (Commissioner). Trained by Todd Pletcher, who'd been inducted into the National Museum of Racing's Hall of Fame a few days earlier, Con Lima is also owned by several other partners in addition to the Eclipse partners, and it looked like they'd all descended into a private area at the far end of the patio for a victory get-together that Wellman appeared to be hosting. We saw a bunch of racing personalities headed there, including Johnny Velazquez, the legendary Angel Cordero Jr., and NYRA reporter/analyst Acacia Courtney.

Barry Weisbord, the former publisher of this publication, said he wasn't headed to the Eclipse gathering, as I greeted him walking in that direction. I told Cynthia that we'd probably see celebrity chef Bobby Flay soon, as Weisbord and Flay are good friends and are frequently in the same orbit when in the same town, and presto, there came Flay on cue from the opposite direction.

I don't know what Flay thinks of the food at the Adelphi, but the small Duxbury oysters were excellent, as was the crème brulee. The filet mignon was a fine cut and it was good, but it was served a tad overdone. Cynthia, a vegetarian, had the ravioli with sweet pea filling and a watermelon, heirloom tomato, and asparagus salad that she enjoyed. And both of us thought the specialty cocktail called Equinox, a mixture of tequila, habanero-hibiscus syrup, grapefruit, and lime, was excellent.

Flay had a good sale at Fasig-Tipton. We'd arrived at the sales grounds in time to see his Uncle Mo son from Dame Dorothy hit the million-dollar mark, and from there the bids moved up until West Bloodstock, as agent for Robert and Lawana Low, secured the colt for $1.6 million–a price that would make him the second-highest yearling at the sale behind the $2.6 million that M.V. Magnier of Coolmore paid for the Into Mischief colt out of Paola Queen.

The nighttime atmosphere at the sale was electric, and for Cynthia, who isn't a sales goer, it had a carnival-like feel to it, with the auctioneers barking, bid spotters gesturing, and bidders discreetly messaging their intents. Fasig president Boyd Browning strolled around the grounds like the master of ceremonies, greeting buyers and sellers alike with a smile.

With long hair and a cowboy hat, I wasn't instantly recognizable to most of the people I knew. Claiborne's Walker Hancock walked straight past me without a blink of recognition, but his consigliere, Bernie Sams, did see me. “Get a haircut,” he said, as he briefly shook my hand and scurried by.

Bob Baffert, wearing a trademark crisp white shirt and pressed jeans, was with his wife and son and looked hard before recognizing me, and then he blurted that I looked like Jerry Garcia of the Grateful Dead. We spoke of his situation briefly, and he informed me that “I've got a lot of support from a lot of people.”

As we turned away from Baffert, I was greeted by the outstretched hand of Lane's End's bloodstock advisor/agent David Ingordo and his wife, trainer Cherie DeVaux. Ingordo is one of the sharpest judges of bloodstock in the game, and he's an overall smart guy who can discuss a variety of subjects intelligently. He's assisting with his wife's string at Saratoga, and the next morning he gave us a tour of their barn, which is stacked with fillies and mares by Ingordo's design. While there's a frenzy among buyers at auctions for colts that can potentially become stallions, Ingordo plays the reverse game, buying fillies. His strategy–a good one–is to get them graded black type and then sell, and judging by what I saw, it's succeeding.

Who else did we see at the sale or the track? Trainer Wesley Ward, looking trim, greeted us warmly but briefly before heading to the back ring to bid on a horse. Lesley Campion of consignor Paramount said they were having a good sale, which included the sale of an American Pharoah filly from Funfair for $700,000. Donato Lanni, who buys for Baffert and the group known as “The Avengers” among other high-profile clients, stopped to say hello. Lanni, Ingordo, Kerry Cauthen of Four Star, and WTC bloodstock editor Frances J. Karon were “graduates” of the same “class” at Walmac under the guidance of that legendary cowboy Johnny T. L. Jones Jr., whose approach to teaching young people in the business how to succeed was probably more colorful than the techniques being taught nowadays at Darley's elite Flying Start program.

The day after the sale, I did Steve Byk's “At the Races” radio show live from his setup next to the shoeshine stand outside the racing office at the track. Byk is as sharp as a tack, and it's always a pleasure to do the show live with him, particularly so this year as we'd missed the 2020 season. Plus, he always attracts some interesting and likeable guests, such as Jimmy Ventura, handicapper Michael Beychok, Oaklawn and Kentucky Downs's Rick Hammerle, and Capital OTB's Seth Merrow. I also got a chance to finally meet the excellent journalist Mike MacAdam, who I'd known only from interactions on Twitter.

MacAdam duly noted my “scorched-earth exit” from Twitter, a turn-of-phrase that only someone with his talent could conjure to hit the mark squarely between the eyes.

Another highlight of the trip was meeting an extremely polite woman at the hotel elevator who could have taught Arlington's Tony Petrillo a lesson or two in manners. “Good afternoon, sir,” she said. We struck up a pleasant conversation, and when she said she was from Ocala, I asked her if she was in the racing business. “Yes, sir. I'm Todd Pletcher's mother, and he just got inducted in the Hall of Fame,” she said with parental pride. I asked her to give my congratulations to her son, and she promised she would.

And that's the rough sketch of how the week went down. Saratoga, it was great seeing you.