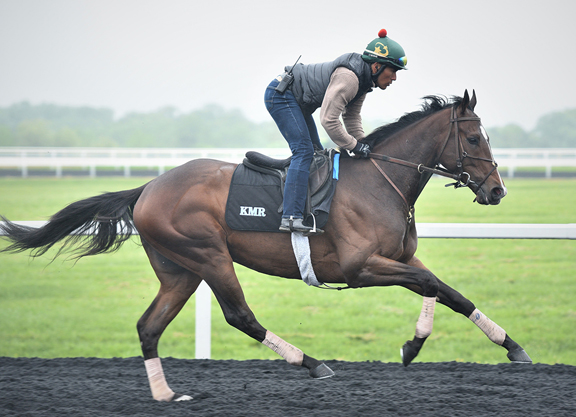 My TDN colleague Chris McGrath ably discussed the blue-hen markers in the female family of Maryland-bred Gl Preakness contender Alwaysmining (Stay Thirsty) the other day: namely, fourth dam Cequillo, the Tartan Farms ancestress of many high-class runners, broodmares, and sires, including the highly influential John Nerud-bred sire Fappiano (Mr. Prospector); and Plucky Liege, Cequillo’s fourth dam, who was just as prolific and is the dam of the imported breed-shaping brothers Sir Gallahad (Fr) and Bull Dog (Fr), sons of Teddy (Fr) who stood at Claiborne and Coldstream Stud, respectively.

It’s not often these days that Cequillo appears in the fourth generation of a pedigree in tail-female. A foal of 1956, Cequillo was 17 when she foaled the Dr. Fager mare Consequential, Alwaysmining’s third dam. Consequential was 18 when she produced the Golden Act mare Che Sara Sara, Alwaysmining’s second dam, and Che Sara Sara was 12 when she dropped the Anees mare What Will Be, the dam of the Stay Thirsty gelding.

Alwaysmining was bred by Avla Pitts, who’s familiarly known in Maryland and Kentucky horse circles as “Poppet” Pitts. The another-era feel to Alwaysmining’s female line is also evoked in his breeder’s name and history. A longtime horsewoman from the timber, foxhunting, show horse, and steeplechasing worlds in Maryland, Pitts’s ex-husband was noted Maryland and Jockey Club steward Clinton Pitts Jr. Her daughter is Kentucky-based trainer Helen Pitts-Blasi, who trained Grade l winner Einstein and Curlin for his first start while her stepfather, Joseph F. “Judge” Flanagan, also a Maryland steward, bred Elkridge, the champion steeplechaser of 1942 and 1946 who was named after the Elkridge Harford Hunt Club of Monkton. He’d bought the farm where Pitts bred Alwaysmining in 1929. Named Hitchcock Plains, Flanagan bequeathed the 56-acre property near Fallston and Monkton in Harford County to Pitts and she’s lived there for more than 40 years. “Quite a long time,” she said, though the farm isn’t known by its original name anymore. “We call it ‘The Pitts,’ which is bad. After all this, we might have to give it a proper name,” she said.

“He bought the farm in 1929 for practically nothing,” Pitts continued. “He did a lot to it, and we’ve done a lot more to it since he left us. He was also known as ‘Spotless Joe,’ and this place was spotless, and I’m trying to keep up his wills.”

When her husband was around, Pitts said, “we had jumpers, and he rode them, and I bred hunters and timber horses and show horses.” She’s boarded timber horses and steeplechasers for other trainers through the years and has had as many as 23 head on the farm, but mostly she keeps only her horses on the property now. She lives alone and tends to them with the aid of neighbor Vivian Rall, who helps with foaling. Pitts said she started breeding horses for the flat and to sell about eight years ago when she acquired What Will Be, the dam of Alwaysmining.

At the moment she has three mares, one of which was purchased recently, and some of their offspring, including a show horse, a rehabbing timber horse, and a retiree. She breeds her mares to Kentucky stallions–she said she likes to breed to new and young horses–and sells the foals as short yearlings at Keeneland January with Hunter Valley Farm. Alwaysmining was sold that way for $32,000 and he was later pinhooked for $130,000 to Jim McIngvale at Keeneland September. Alwaysmining’s Fast Anna yearling half-sister made $100,000 this year, and the buyers were Caroline and Greg Bentley, who’d purchased Alwaysmining from McIngvale privately after the colt had first won in his fourth start, at two. Subsequently gelded, Alwaysmining has won six of eight starts for the Bentleys’s Runnymede Racing LLC and trainer Kelly Rubley, with an overall record of seven wins from 12 starts and earnings of $386,192. As a Maryland-bred, Alwaysmining is eligible to earn an additional state-bred bonus of $225,000 each to the owners and breeder in addition to the winner’s share of the $1.5-million Preakness purse should he win the Classic.

Adrian Regan of Hunter Valley was introduced to Pitts through mutual friend Gary Murray–who’d worked at Ashford Stud–about 10 years ago. Regan is her bloodstock agent/manager and boards her mares when they are sent to Kentucky to breed. When he first visited Pitts, Regan said he was struck by her attention to detail and the way her horses were raised. Anyone who knows the milieu in which Pitts was raised could have told him that. The horse is a way of life for the Maryland hunter/jumper crowd, down to the uniforms that include canary breeches, frock coats, stock pins, hammerhead spurs, hunting horns, top hats, and the requisite flask.

“Poppet, she only has the couple of mares, but she looks after them, like, unbelievably,” Regan said. “When I first went in there, the place was immaculate, the horses were immaculate. The care they get is unbelievable, and I was very taken by the place as soon as I went in there.”

Regan and Pitts then devised the strategy of breeding mares in Kentucky, foaling in Maryland, and selling as short yearlings at Keeneland in January.

“She foals them in Maryland, always, you see, because she loves seeing them outside her window and she loves the whole thing of taking care of them, which she does down to an absolute T,” Regan said. “They come up to me to be bred back. When we get them to 60 days to 90 days pregnant, we send them back to Poppet, because she basically suffers withdrawal symptoms until she gets them back.”

Regan said that because from early on Pitts didn’t use expensive stallions or have the glittering pedigrees, her yearlings were placed in Keeneland January Books 1 and 2 so they would stand out for the way they looked and were raised, instead of Keeneland September, where they’d be shuffled back into the last books among a sea of yearlings with shinier pedigrees. The formula has been successful and they’ve kept to it since. The Fast Anna half-sister to Alwaysmining that Hunter Valley sold for Pitts in January is the latest example.

“We’re in in Book 2 in January, and you know how that is,” Regan said. “So Spider [Gabriel “Spider” Duignan, whose clients are the Bentleys] strides down and he says, ‘Adrian, I’m going to make your day. I have to look at that filly of yours.’ I said, ‘Work away. She’s an absolute rock star.’ You know, Spider was looking at me funny about a rock star in Book 2 in Keeneland January, but he looked at her and came back and said, ‘You’re right, she is.’ So Spider went into dialogue with his people, but that filly, we were already into double digits in scopes with her, and you know what that’s like at Keeneland January Book 2. She was outstanding.”

Both Pitts and Regan said that Regan and Murray advise on stallion selections, but in the case of the mating that resulted in Alwaysmining, Pitts was the one who happened to pick Stay Thirsty, then at Ashford and now in California, for What Will Be.

“I don’t know how I came up with Stay Thirsty,” Pitts recalled. “I studied the pedigree a little bit. But it was something I dreamt up on my own. I usually lean on Adrian, but don’t ask me, I don’t know too much about it. But somehow I got involved, and I love everything to do with Ashford. It’s just a nice, beautiful place. So, I went to see him there and loved the horse.”

Because What Will Be is by Anees, a grandson of Fappiano, she already had two crosses to Cequillo (6X3) and two to Dr. Fager (5×3) and was bred similarly to the Tartan-bred Fappiano horse Quiet American (who was 3×2 to Dr. Fager and 4×3 to Cequillo– his third dam). Breeding experts like Leon Rasmussen and John Nerud, who worked together on the mating of Quiet American, believed in accumulating and duplicating the blood of Cequillo (and, consequently, Plucky Liege), and, probably without knowing this, Pitts did the same when she bred her broodmare to Stay Thirsty, whose sire Bernardini was from a Quiet American mare, resulting in even more duplications to Cequillo and Plucky Liege in the background of Alwaysmining.

What Pitts did know, however, was horsemanship, and she bred her broodmare to the sire that she thought would best physically suit her mare. That skill of hers will be on full display Saturday when the gelding she bred will try to give Maryland and its smaller circle of hunter/jumper people a rooting interest in the hometown Classic at Pimlico.

Sid Fernando is president and CEO of Werk Thoroughbred Consultants, Inc., originator of the Werk Nick Rating and eNicks