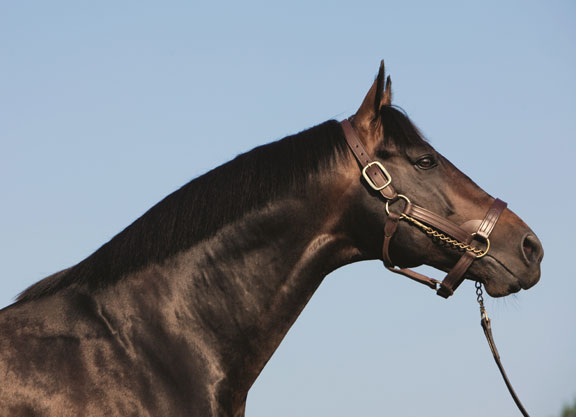 There's a tendency in this business–as in life–to downgrade the relevance of the aged and to push them aside in favor of youth. You see this in bloodstock all the time. Everyone wants young mares, just as everyone wants to patronize first-year sires. Old mares, even some stakes producers, are discarded cheaply, and older sires, unless they are elite, have a hard time attracting mares, even at discounted fees. Likewise, everyone wants good 2-year-olds that will mature into early 3-year-olds on the Triple Crown trail, but no one seems to be as invested in later-developing runners, who can also have a harder time attracting stud interest when retirement beckons.

Those who bred to him this spring at $40,000 got a bargain, and I'll explain more about that later. But suffice to say, he has a colt headed to the Gl Kentucky Derby, and that's because the Derby is in September this year.

A homebred for longtime owner-breeder Bruce Lunsford, Art Collector (Bernardini) won once from five starts last year, but he's undefeated in his four 2020 starts, including a convincing win on Sunday in the Listed Runhappy Ellis Park Derby, a Kentucky Derby points race. Before that, Art Collector had won the Gll Toyota Blue Grass S. at Keeneland July 11 by 3 1/2 lengths from the talented filly Swiss Skydiver (Daredevil), the favorite in the race. The Blue Grass was the colt's first black-type win, but his latest score only confirmed that form and all but assured that he'll head to Louisville in September as the second choice in the Derby betting behind Tiz the Law (Constitution), a dominant winner of the Gl Runhappy Travers S. Saturday at Saratoga.

All told, Art Collector has won five of nine starts and earned $664,380, and he has come to hand as a high-class second-half-of-the-season 3-year-old who made his season debut in an optional claiming event at Churchill May 17, which in a normal year would have been two weeks after the Derby. Patiently handled by Lunsford and trainer Tom Drury, the extra time for development that the pandemic afforded to Art Collector only underscores the notion that the spring Classics aren't in the best interests of some talented 3-year-olds, though most of these types with even a modicum of ability are usually cranked up for a series of races that come only once in a lifetime for them.

The 12 Grade l or Group 1 winners I've listed above are his total in the Northern Hemisphere, though he's represented by three others in the Southern Hemisphere. All told, Bernardini is the sire of 76 black-type winners and is an accomplished stallion, but he's yet to sire a horse as good as he was.

Bernardini himself was a late-developing colt who was unraced at two, but as a 3-year-old in 2006 he made up for lost time by winning six of eight starts, including the Gl Preakness S., the Travers, and the Gl Jockey Club Gold Cup on his way to an Eclipse Award as the champion 3-year-old male. He never raced at four, instead entering stud on the eve of the Great Depression in 2007 for a $100,000 fee. By 2010, in his fourth season and in the aftermath of the economic turmoil, his fee was down to $60,000, but with two top-level 2-year-old winners in first crop, Biondetti and A Z Warrior, and Stay Thirsty adding the Travers the next year, followed by Alpha from his second, Bernardini's fee went to $75,000 in 2011 and then doubled to $150,000 in 2012.

Bernardini had a good run at a six-figure fee, but without the requisite Classic winners or superstar performers in subsequent crops, Bernardini's career trajectory as he's aged and as reflected by stud fee was inevitable, but he's now at a level where he is priced attractively for the quality of sire he is.

I noted earlier that Bernardini is a bargain these days, but there's another reason for this and it's age related as well. At 17, he's already an accomplished broodmare sire, and the success he's had in this career is dazzling for his age. Looked at from this vantage point, he's youthful, and therefore attractive, and breeding to him now has the added benefit of getting a potentially valuable broodmare down the line if he gets you a filly.

Obviously, his daughters have worked with a variety of sire lines, which will make them more in demand as time passes. They have also produced graded winners by such stallions as oldie Distorted Humor (who is 27; note that Art Collector and Grade l winner Takaful are from Distorted Humor mares), deceased Pioneerof the Nile (who has American Pharoah at stud), Speightstown (who is 22), and leading sire Into Mischief.

As a broodmare sire, he has three graded winners by Uncle Mo (Grade ll winners Modernist and Mopotism, in addition to Mo Town) and two by Curlin (Grade ll winner Point of Honor in addition to Paris Lights) and Street Sense (Grade lll winner Shared Sense plus Maxfield), which means those stallions are bound to see more mares by Bernardini in the future as breeders try to replicate the cross.

All of this will bring more demand for Bernardini, as will continued success from Art Collector.

Ironic, isn't it, that he's now got a legitimate Kentucky Derby runner while viewed as an old man in the breeding shed, while he's got new life as a young broodmare sire that makes him relevant in a new way?