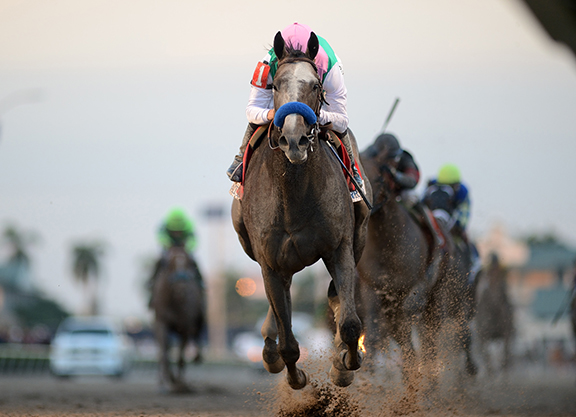 The unexpected death of Arrogate (Unbridled's Song) on Tuesday was a devastating blow to his connections at Juddmonte and to the industry at large. He was the horse that Juddmonte had expected to base its boutique North American stallion operation around and he was the last great hope that his late sire would deliver a top-of-the-line stallion, something Unbridled's Song has been unable to do yet during an illustrious career as an excellent sire of racehorses, including 22 Grade l winners, and an outstanding sire of broodmares. Those expectations have now been all but dashed unless horses like Liam's Map and Cross Traffic build on their excellent starts at stud.

Only seven years old at his passing, Arrogate–a 'TDN Rising Star'--was his sire's best runner and the second of four consecutive sophomore champion colts for Bob Baffert, after American Pharoah (Pioneerof the Nile) in 2015 and followed by West Coast (Flatter) in 2017 and Justify (Scat Daddy) in 2018. Unfortunately, his placement in this chronology between two Triple Crown winners tends to dim his reputation next to their historic accomplishments. He wasn't a Classics contender and he only came into his own as a top 3-year-old in late August, when he won the Gl Travers by 13 1/2 lengths in a track-record of 1:59.36 in his stakes debut. He was 11-1 that day and beat 5-1 stablemate American Freedom in the race with future Horse of the Year Gun Runner in third. His demolition job in one of the most prestigious races in the country made him the immediate leader of the class, and he went on to prove that the Travers wasn't a fluke.

In hindsight, Arrogate's Travers is even better than it appeared at the time. Future Grade l winners Gift Box and Connect were fourth and sixth, with Gl Belmont S. winner Creator seventh and Gl Preakness winner Exaggerator, the favorite, 11th.

The Travers began a remarkable win streak for Arrogate in four highly sought-after Grade l dirt races. They fell between his late 3-year-old and early 4-year-old seasons, and they helped to make him the richest North American-trained Thoroughbred of all time. Those wins also put his name among some of racing's best, albeit briefly.

Arrogate next appeared in the Gl Breeders' Cup Classic, where he was the second choice to favored 5-year-old California Chrome, the 2014 Gl Kentucky Derby and Preakness winner and Horse of the Year who'd made a remarkable comeback after a mismanaged career at four. It was a tall task to ask Arrogate to take on the best older horse in training at weight for age in only his second stakes start. Historically, iconic older horses have usually bested the best of the sophomores, like Seattle Slew did with Affirmed and Affirmed with Spectacular Bid, in fall races. More recently, American Pharoah defeated older horses in the Gl Breeders' Cup Classic, but he didn't have a horse of magnitude to deal with. Justify never raced against older, Rachel Alexandra never met Zenyatta as a 3-year-old and Curlin's main competition were his crop-mates Hard Spun and Street Sense.

In California Chrome, Arrogate had a serious adversary at the top of his game, and the Breeders' Cup Classic lived up to the billing. Chrome, physically mature and a picture at five, looked a confident winner in deep stretch, but Arrogate's inexorable run inside the last furlong saw him win by a half-length in 2:00.11, with almost 11 lengths back to Keen Ice in third. It was another tour-de-force performance for the colt, perhaps even more impressive than his Travers win. Keen Ice, remember, had upset American Pharoah the year before in the Travers at the same distance, and the first three home were immediately followed by Grade l winners Hoppertunity, Melatonin, Frosted, and Effinex. By all measures, this race stacked up as an indicator of class. Because it was only Arrogate's second stakes and second Grade l win of the year, California Chrome was given the Horse of the Year title, but it seemed a foregone conclusion that Arrogate would get his award in 2017.

You know the story from here. Arrogate began the new year with an impressive victory in the Gl Pegasus World Cup Invitational S., which he won by almost five lengths in the excellent time of 1:46.83. The race was somewhat anti-climactic as California Chrome got hurt in the running and the rematch between the two never materialized.

However, Arrogate's next race defined him as exemplary and brought out the accolades from everyone, including his trainer. His reputation was at its apex. Why? Because he broke badly in the Group 1 Dubai World Cup, got banged around, and trailed the field in last place early, but somehow he won by 2 1/4 lengths from Gun Runner. “That's the greatest horse I've ever seen run,” Baffert blurted in the heat of elation, and if whether he'd be held to that view now is debatable, at that time many views of the horse were in the same zip code as Baffert's.

Those four consecutive Grade l wins strung together by Arrogate were as great as or better than any in recent memory, and they should be remembered as such. All told, Arrogate, who was bred in Kentucky by Clearsky Farms and purchased by Juddmonte for $560,000 at Keeneland September, won seven of 11 starts and earned $17,422,600.

After Dubai, Arrogate was clearly not the same horse, losing three consecutive races, including the Breeders' Cup Classic to Gun Runner, who ended up with Horse of the Year honors in 2017. Those who'd doled out the lofty platitudes when the big gray was winning went silent after Arrogate ended his career on these losses. Even some leading breeders who couldn't wait to use him when he was winning were nitpicking his credentials when he entered stud. These folks were disappointed that Arrogate hadn't continued to be the superhero they'd originally imagined, and they took it out on him rather harshly, I thought.

I've addressed Arrogate's post-Dubai performances in print before. This is from North American Trainer magazine:

“And this brings me to where the real issue for Arrogate may lie: the Dubai World Cup. It's fashionable these days to make fun of the Dubai 'bounce,' and there's a vocal community, especially on social media, who'll torch you for saying it. But just because a number of horses haven't subsequently bounced from Dubai doesn't mean the bounce isn't applicable to specific instances, particularly for Baffert-trained winners of the DWC. And, I should add, for the other DWC winners from California.

“Six California-based runners have won the Dubai World Cup and Baffert has trained three of them, Silver Charm (1998), Captain Steve (2001), and Arrogate (2017). Post DWC, Silver Charm was second in the GII Stephen Foster at Churchill on June 13 and fifth in the then-GIII San Diego H. at Del Mar on July 25 before winning his next start. Captain Steve, likewise, was second in the Stephen Foster, on June 16, and fourth in the GI Hollywood Gold Cup July 1. Captain Steve was then third in the San Diego on July 29 and finished his career with a fourth in the GI Pacific Classic Aug. 19.

“The other three DWC winners from California were Pleasantly Perfect (2004), Well Armed (2009), and California Chrome (2016). Pleasantly Perfect was trained by Richard Mandella and made his first start after Dubai in the San Diego Aug. 1. He was second. He then won his next start, the G1 Pacific Classic on August 22. Well Armed, trained by Eoin Harty, was eighth in the G2 San Diego on August 8 and never raced again. Only California Chrome, trained by Art Sherman, won immediately after Dubai, in the G2 San Diego on July 23. He was also the only one of the six to acclimate in Dubai before the DWC, winning a handicap at Meydan a month before the main event.

“Winning the DWC takes a lot out of a horse, particularly since the North Americans are going off Lasix in the race. The ship to Dubai and back is twice as long for the Californians, too. Perhaps acclimating in Dubai is the answer. But for whatever the reasons, five of the six Californians haven't won immediately after winning the DWC, and Arrogate fits that pattern.”

On Sunday, two days before Arrogate was put down from a condition that hasn't been fully understood yet, the undefeated Deep Impact (Jpn) colt Contrail (Jpn) won the Group 1 Japanese Derby. Previously, he'd won the G1 Japanese 2000 Guineas, and he's slated to contest the G1 Japanese St. Leger, attempting to secure the Japanese Triple Crown like his sire did. Contrail is a son of the Unbridled's Song mare Rhodochrosite. Altogether, daughters of Unbridled's Song have produced 179 black type winners.

With at least 23 G1/GI winners to his credit so far as a broodmare sire, Unbridled's Song–who died in July of 2013, just months after Arrogate was born–has established a reputation as one of the best sires of mares of recent times. However, he's had a checkered career as a sire of sires, and he hasn't yet had a top-class son to carry his name forward. He's got some promising young sons still making their way, though, including the aforementioned Cross Traffic at Spendthrift and Liam's Map at Lane's End. Arrogate, however, will have only three crops with which to make a name.

Arrogate's first yearlings will sell this year, and it's important to remember that as his sire's best racehorse and as his last major son to go to stud, some of Arrogate's sons could still emerge over the next few years to carry his name forward. It happened to Dubai Millennium with Dubawi from only one crop, and Arrogate has three.

I was a fan of Arrogate, as I am of this very American dirt line that traces to Mr. Prospector through Unbridled's Song, Unbridled, and Fappiano. I'm betting Arrogate will achieve posthumous success and gain a measure of revenge against some of those who doubted him, and that this branch of Unbridled's Song will carry forward.