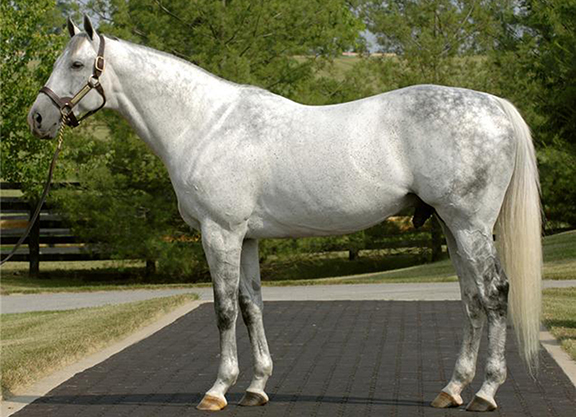 Last year, for instance, he led the North American general sire list with the help of Arrogate's Gl Pegasus World Cup Invitational and G1 Dubai World Cup wins and Forever Unbridled's Gl Breeders' Cup Distaff score, even though he had far fewer starters than any other sire in the top 30 and his youngest runners were three.

Through 17 crops, Unbridled's Song was represented by 117 black-type winners, or 7% from foals–an excellent ratio in the big-book era–and 22 Grade l winners, 13 of them colts. With many quality runners, it was assumed a long time ago that his name would be carried forward in pedigrees through both his sons and daughters as they went to stud, but this has proven to be only partly true. While his daughters are sought-after broodmares who've produced 157 black-type winners around the globe to date, his sons haven't matched their consistency yet.

In fact, Unbridled's Song hasn't had a son come anywhere close to the type of sire he was, though he's had and does have several useful or regionally significant sons at stud, including Midshipman, Old Fashioned, Songandaprayer, Half Ours, Even the Score, Rockport Harbor, Fiber Sonde, etc. He's also had more than a few poor or indifferent sires at several prominent Kentucky farms, and others have since been exported after timely offers, including Old Fashioned, Political Force, Eurosilver, Dunkirk, First Defence, Emcee, Zensational, etc.

But there is some hope around the corner that maybe one or more of his last major Kentucky-based sons could become the big-time heir that eluded him during his lifetime.

These are positive signs: Juddmonte's Horse of the Year Arrogate led all first-year covering sires at Keeneland's November sale, with seven mares averaging $366,429 off a $75,000 stud fee, and Spendthrift's relatively unheralded Cross Traffic, who entered stud in 2015 for a $12,500 fee, handily leads all freshman sires with progeny earnings of $1,942,157 at this writing, more than $900,000 ahead of Spendthrift's second-place Goldencents (Into Mischief) with a month and a half to go for the title. Along with Three Chimneys' champion Will Take Charge, who began for $30,000 and is currently #4 on the freshman sire list, and Lane's End's Liam's Map, who started off in 2016 for $25,000 and was #3 by first-year yearling average at Keeneland September behind American Pharoah and Honor Code, there is plenty to look forward to as these four major Grade l winners give it a go. Perhaps even Gainesway's Grade ll winner Bird Song, who stands for $5,000 and whose first foals arrive next year, and Taylor Made's Grade l winner Graydar, who started for $15,000 and has first-crop 3-year-olds racing decently this year, could be given outside chances to make it.

As a group, these six stallions are also atypical of the type of stakes horses that gave Unbridled's Song a loud and perhaps unfair reputation for unsoundness: those late-season 2-year-olds or early season 3-year-olds that were honed for the Classics but got hurt along the way, such Gl Fountain of Youth S. winner Songandaprayer from his first crop (1998), Gl Wood Memorial winner Buddha (1999), multiple Grade lll winner Rockport Harbor (2002), Grade ll winner Old Fashioned (2006), Gl Breeders' Cup Juvenile winner and champion two-year-old colt Midshipman (2006), Gl Classic-placed Dunkirk (2006), Grade ll winner Mission Impazible, Grade lll winner Winslow Homer (2007), etc., and most notably, the Grade ll-winning filly Eight Belles (2005), who broke down and died on track after finishing second in the Gl Kentucky Derby. Rick Porter's Fox Hill Farm raced Eight Belles, as well as Winslow Homer, Rockport Harbor, and Old Fashioned, and Fox Hill never got the satisfaction from those four that it did from some of its high-profile runners from other sires, such as Medaglia d'Oro (Songbird), Saint Liam (Havre de Grace), and Tapit (Joyful Victory).

The gray Unbridled's Song was a member of Unbridled's first crop and was a big, scopey horse and a man among boys–both his sire and broodmare sire, Caro, were big horses–as a 2-year-old, when he won the Breeders' Cup Juvenile in his third start. At three, he won the Gl Florida Derby and the Gl Wood Memorial and entered the Derby as the 3.5-1 favorite but finished fifth to Grindstone, another son of Unbridled. He'd famously had a flake in an ankle at two–the reason he was returned to the owner, Ernie Paragallo, from the Barretts sale where he'd made a record $1.4 million on a Japanese bid–and ran in in the Derby with a bar shoe after being plagued by foot issues. He was never managed under optimum conditions, was plagued by a variety of health issues throughout his career, and ultimately was retired in early 1997 after fracturing a cannon bone during a routine gallop as a 4-year-old. He went to stud as Taylor Made's first-ever stallion, with a record of five wins from 12 starts and $1.3 million in earnings. His stud fee in 1997 was $30,000.

His striking physicality, pedigree, race record, speed, and overall presence made him a popular horse from the beginning, and he delivered early with horses that looked like him and had the handiness and speed at two to suggest they'd be Classic horses at three. By 2007, his fee was at its apex at $200,000.

As noted, many of his sons and daughters were initially managed as he was, perhaps because their size and substance gave the impression of maturity, but some of them were ultimately betrayed by their structural immaturity when asked to do too much too early.

By the latter part of Unbridled's Song's career, many of his better runners were being routinely managed with patience, and the results suggested that maybe he wasn't such a source of brittle horses after all, if his offspring were given the time they needed.

Will Take Charge was a slightly different story. He apparently was as mature as he appeared early on and was raced hard and regularly, proving as sound as they come nowadays, but even he became better later. He was a winner at two and was an early season graded winner at three, but won his first Grade l in the Travers in August after competing in the Derby, the Preakness, and the Belmont S. He also won the Gll Pennsylvania Derby after the Travers, was second in the Breeders' Cup Classic, and then finished his rigorous sophomore season with a win against elders in the GI Clark H. to be named the champion 3-year-old colt of 2013, based on his exploits in the second half of his 3-year-old season.

That Will Take Charge and Cross Traffic are doing as well as they are with their 2-year-olds is a promising sign for this group, and especially so for Arrogate, who has the best mares of any of these horses behind him at Juddmonte.

Juddmonte knows how to make stallions–Frankel and Kingman are its latest–and the US division of the international operation has experience with Unbridled's Song, having stood his homebred son First Defence in Kentucky with limited success before he was sent away to Saudi Arabia to make room for Arrogate. They'll make the pedigree adjustments and recalibrate for Arrogate to get earlier horses for the Classics, but they know better than most how to manage types that need time. First Defence, like Arrogate, wasn't on the Classics trail, and he didn't become a graded stakes winner until four, when he won the Glll Jaipur S. and Gl Forego S. He, like the six mentioned here, was managed to allow for maturity. As a sire, he got only 10 black-type winners from more than 300 foals, but it's notable that his best runner by far was Juddmonte's own Close Hatches, who won an Eclipse in 2014 as champion older dirt female.

Cross Traffic, who, as noted above, didn't race at two or three and made all his starts at four, is the sire of the probable 2-year-old filly champion in Gl Breeders' Cup Juvenile Fillies and Gl Frizette S. winner Jaywalk, along with four other black-type winners from his first crop. He's up to $25,000 for 2019 after serving mares for $7,500 this year. If he becomes the champion first-crop sire this year, he will be the second son of Unbridled's Song to do it, after Dunkirk in 2013.

Dunkirk was unraced at two and won his first two starts early in his 3-year-old season and then was second in the Gl Florida Derby. From there, he was sent to the Kentucky Derby, where he was 11th. After regrouping, he ran second in the GI Belmont S., got hurt, and was retired to Ashford Stud for a $10,000 fee.

Like Cross Traffic, Dunkirk got a Grade l winner in New York from his first crop–Champagne winner Havana. But Dunkirk was sold to Japan after the following year's breeding season, and his stats–14 black-type winners from 679 foals, or 2%–suggest in retrospect that it was a good sale.

Aside from these two, other sons of Unbridled's Song haven't ranked particularly well on the leading freshman list.

This suggests that early maturity isn't a part of the profile for sons of Unbridled's Song, Cross Traffic and Dunkirk notwithstanding. And because the commercial market isn't kind to later-developing sires, these stallions were probably caught in the bind of having their runners pushed early to produce.

Unbridled's Song succeeded early in his career with enough high-quality late-season 2-year-olds for the Classic preps, but he became an even better sire later in his career as his runners were given more time to develop. There isn't a lot of the same tolerance for his sons at stud, especially for the cheaper ones, but perhaps Arrogate and company will change that way of thinking.

It could mean the difference between success and failure, or whether Unbridled's Song gets a successor or two at stud.