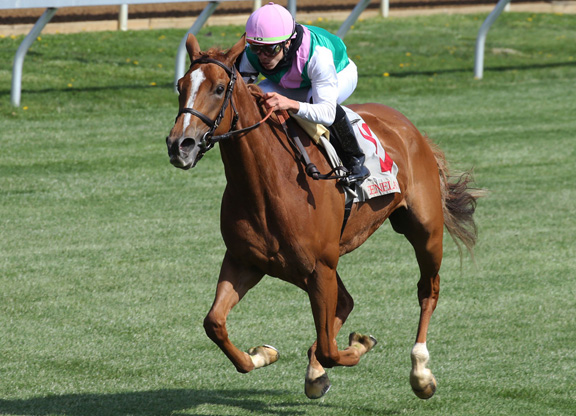 Not to be lost off the heels of a very productive weekend of GI Kentucky Derby/Oaks preps for the Chad Brown barn–more on that in a bit–the four-time Eclipse Award-winning trainer recently unveiled a pair of ultra-impressive, stakes-quality Euro imports for allowance victories.

She was receiving first-time Lasix in the 1 1/16-mile affair while making her first attempt since an unplaced effort–her lone start at three–in last July's G3 Tattersalls Musidora S. at York. The lightly raced Pocket Square is a daughter of the multiple stakes-placed Dansili (GB) mare Shared Account (GB), a full-sister to French G1SW Zambezi Sun (GB).

“She ran terrific,” said Brown, who also won Friday's GI Maker's Mark Mile with Raging Bull (Fr) (Dark Angel {Ire}). “She got a good trip and a good ride from Irad [Ortiz, Jr.]. She had been training very well down at Payson Park all winter, so we were cautiously optimistic that she could get her campaign kicked off the right way.”

Pocket Square could potentially target Belmont's GI Longines Just a Game S. on the GI Belmont S. undercard June 5. Brown and Juddmonte followed a similar blueprint with Antonoe (First Defence), who also won a Keeneland allowance in her U.S. bow prior to adding the Just a Game in 2017.

“A race like the Just a Game is definitely in play,” Brown said. “She's already won at a mile, so I don't think cutting her back will hurt. We've had success before doing that with another Juddmonte horse Antonoe, who followed a similar track. It's something we'll nominate her to, but in no way is that firm yet. We'll get her back to New York and see how she's training first.”

Flighty Lady (Ire) (f, 4, Sir Percy {GB}), four times group-placed at two and three in France, also stamped herself as one to watch in her first attempt on these shores, punching on nicely with a smart, two-length score with first-time Lasix traveling 1 1/16 miles over the Aqueduct grass last Saturday (video).

“She trained down there at Payson, too, and also got her season kicked off the right way,” Brown said. “I'm looking at the [GIII] Gallorette [S. at Pimlico May 15] as probably the leading candidate for her next spot. But we'll nominate her to a bunch of different stuff. I like the timing of that race and keeping her at that distance [1 1/16 miles] for now, so we'll see.”

“Fortunately, I've had the combination of a great mentor with Bobby training me how to take these type of horses in,” Brown said. “Really no two are alike, right? They come from different areas of Europe or South America, what have you, so we adjust to what we receive. And the other part is getting the horses. The horses you mentioned were very highly regarded, and had a lot of ability to begin with. My team, I sort of trained them for what I know, and they then execute it with the horses that we're grateful to have. It's worked that way and it's nice to see that it's continuing to work. As long as we get these type of horses and my team continues to follow the boss's plan–which was really Bobby's–hopefully, we'll be able to add to that list.”

As the calendar quickly approaches the first Saturday in May, Brown–second in the 2018 Kentucky Derby with champion Good Magic (Curlin) and third in the 2016 Kentucky Oaks with Lewis Bay (Bernardini)-will be well-represented once again in those two Classics with a pair of Klaravich runners.

Highly Motivated (Into Mischief) punched his ticket to Louisville with an ultra-game runner-up finish to Essential Quality (Tapit) in the GII Toyota Blue Grass S., while the unbeaten Search Results (Flatter) now stands atop the Oaks standings following her stalk-and-pounce win in the GIII Gazelle S.

While still up for further discussion, Brown reported that Crowded Trade (More Than Ready), third in the GII Wood Memorial S., may await the GI Preakness S., a race won by the stable in 2017 with Cloud Computing (Maclean's Music).

“Very lucky to have a nice, diverse group of horses to complement those turf runners,” Brown said. “We've got some really nice dirt horses in the barn, too. It's exciting and we've been down this path before. We haven't won either race, the Derby or Oaks, but we've been close and knocking on the door a little bit with limited opportunities.

Brown concluded, “There's so many things to overcome, I've sort of become numb to it knowing everything that can happen. But we know more as a team now definitely, so you feel a little bit more comfortable going over there than the earlier days. Highly Motivated and Search Results seem to really fit with this group. We're really lucky to have these two horses.”