Taking a Bad Beat As a ‘Signal’ 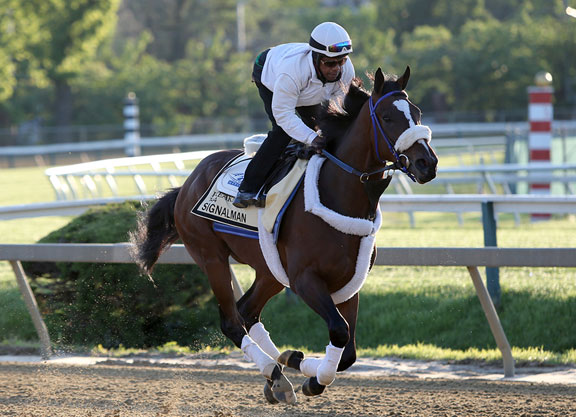 BALTIMORE, MD–Ken McPeek had a clear plan last winter for how to get his over-achieving colt Signalman (General Quarters) to the GI Kentucky Derby. After an encouraging juvenile campaign than included a victory in the GII Kentucky Jockey Club S. and a clear third at 67-1 in the GI Sentient Jet Breeders’ Cup Juvenile, McPeek had a two-race schedule mapped out if all went well.

Instead, his charge endured an equipment mishap in the first prep and was beaten a dirty nose out of a Derby slot-guaranteeing placing in the second one. Plans are often to be adjusted in horse racing though, and McPeek is excited to get his new two-race objective underway when Signalman goes postward as one of 13 in Saturday’s $1.5-million GI Preakness S. at Pimlico.

“I’m very confident that might be a blessing in disguise that we didn’t make the Derby,” McPeek said. “Our goal right now is the next two races. We have every intention of running him Preakness-Belmont and giving him a chance to prove himself in both of those.”

Owned by the partnership of Tommie Lewis, Steve Crabtree, Dean Demaree, David Bernsen, Jim Chambers and McPeek and his wife Sherri’s Magdalena Racing, Signalman kicked off his sophomore season by throwing a shoe leaving the gate in the GII Xpressbet Fountain of Youth S. Mar. 2 at Gulfstream. He made a brief run on the far turn, but flattened out to finish seventh, immediately putting McPeek behind the eight ball in his Derby schedule.

Because of his exploits as a 2-year-old, however, Signalman was still in the hunt heading into his final prep. But he needed at least a runner-up finish in the GII Toyota Blue Grass S. Apr. 6 at Keeneland to secure a spot in the Churchill Downs starting gate. Chasing the speed of eventual winner Vekoma (Candy Ride {Arg}), the blaze-faced bay surged into second late, only to get nailed in the last jump by Win Win Win (Hat Trick {Jpn}), also on the Derby bubble at the time.

“We knew second ensured [a Derby spot], but third definitely put us on the fence and we had to watch the next weekend unfold too,” McPeek said. “Everything happens for a reason I suppose, and he didn’t get in, but he’s got a chance this weekend.”

McPeek bought Signalman for just $32,000 as a Fasig-Tipton October yearling, which was actually a decent sum considering his obscure pedigree, but still not a price tag you’d expect to see on a Triple Crown contender. Regardless of what happens the rest of the way, he has already proven a massively-successful purchase, earning $552,990 so far, over 17 times what he cost in the ring. McPeek has made a living at finding bargain-bin auction buys and Signalman fit the physical profile he looks for.

“I work auctions and I go through and look at horses and try to pick out horses who physically fit what I’d call stakes horse or graded stakes horse body types,” he said. “I don’t necessarily get all enamored with the pedigrees so much as I do the physicals. We’ve got a really good top to bottom, diversified group of clients to place them with and he was a horse that just physically was big, strong, all the right parts in all the right places. He had a modest pedigree, but then you put them out there and see how good they are, and he’s obviously good.”

That keen eye for talent at the bottom of the market goes back decades to McPeek’s earliest days as a trainer, when budgets were tight and extracting value was paramount. And the horse that really put him on the map, Roy Monroe’s five-time graded stakes winner and 1995 Kentucky Derby runner-up Tejano Run (Tejano), was a testament to that approach.

“When I started, my opportunities to buy at auction were minimal,” McPeek said. “My first budget at a yearling sale was $6,000. After that, I had an opportunity from a client to go to Keeneland September and my top budget was $25,000, and I bought him Tejano Run. Then what I’ve been able to do over the years is sharpen my eye as I’ve gotten older. I think I’m much better at it today than I was then, so I’ve got what I would call a bottom to top clientele. I’m actually not always anxious to buy horses at the top of the market because I don’t think there’s much return on investment. So the approach hasn’t really changed since Roy Monroe gave me a yearling to buy in 1989.”

Fittingly, McPeek sees some similarities between his first million-dollar earner and Signalman.

“This horse kind of reminds me of Tejano Run,” he said. “Similar physical, similar pedigree and a bargain buy.”

Signalman has thrived since the Blue Grass disappointment, McPeek says, and he thinks having six weeks’ rest since then, instead of the four he would’ve gotten had he run in the Derby, will play in the colt’s favor.

“He’s gonna run big and he’s fresh,” McPeek said. “I think it’s ideal. It’s still a good group of horses–it’s supposed to be for a million-five–but he certainly fits and he’s gonna get to show how good he is. I think he’s got a big chance.”