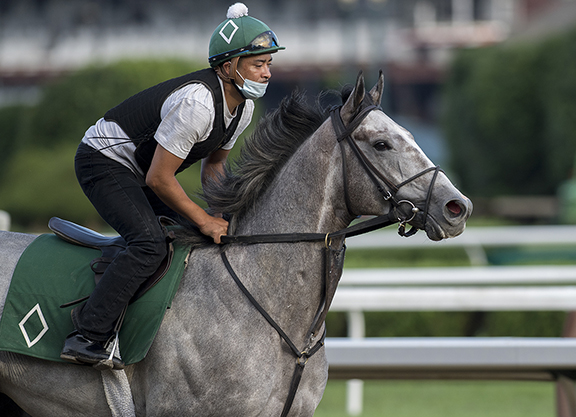 Five of the six runners slated to contest Saratoga's marquee handicap event–the GI Woodward S.–enter into Saturday's 10-furlong affair having won their latest starts. Heading the group is Juddmonte Farm's Tacitus (Tapit), who bounded home an easy 8 3/4-length winner in the 10-furlong Suburban July 4. For that race, trainer Bill Mott gave blinkers another try–even though an earlier equipment experiment failed to result in victory–and was duly rewarded. Last spring, the son of multiple Grade I-winning Close Hatches (First Defence) reeled off consecutive graded scores in the GII Tampa Bay Derby and GII Wood Memorial, before hitting the board in five remaining 2019 starts, including seconds in the GI Belmont S. and GI Travers S. and thirds in the GI Kentucky Derby (promoted via DQ) and GI Jockey Club Gold Cup. He also finished runner up in last season's GII Jim Dandy S. Initially slated to mark his return to action in this season's G1 Dubai World Cup, Tacitus was rerouted to the Saudi Cup after the Dubai festival was KO'd because of COVID-19 and crossed the wire in fifth behind Maximum Security (New Year's Day). The 4-year-old was fourth after a wide trip in the May 2 GII Oaklawn H. prior to his Suburban victory.

“He'll be a fresh horse going in,” Mott said. “He had done a lot of traveling earlier in the year. The Oaklawn race could have been a mistake, but at least we came back and capitalized on the next race being the Suburban. Right after Oaklawn, we decided we would wait for it.”

Mott, who is tied with Elliot Burch and Bobby Frankel with four Woodward wins, has sent out two-time winner Hall of Famer Cigar (1995-96) in addition to To Honor and Serve (2012) and Yoshida (2018).

Favored in latest trip to the post in the July 18 GIII Monmouth Cup, the Sagamore Farm and WinStar Farm runner controlled a moderate pace throughout, lost the lead at the furlong marker to last year's Woodward runner-up Bal Harbour (First Samurai), but re-rallied to get the victory by 1 1/2-lengths over fellow Woodward contender Math Wizard (Algorithms). Global Campaign kicked off 2020 with a win going seven-furlong optional claimer at Gulfstream Apr. 25 before finishing sixth in Churchill's Blame S. May 23. In his only prior start at Saratoga, Global Campaign was third Behind Tax (Arch) and Tacitus in last year's Jim Dandy.

“There's limited opportunities of Grade Is going a mile and a quarter, so we'll give him a chance to do that,” said Pletcher, who sent out Woodward winners Lawyer Ron (2007), Quality Road (2010) and Liam's Map (2015). “Spinoff seems to like Saratoga a lot. He's shown us hints along the way that he has potential for that breakthrough performance I thought the Alydar was arguably his strongest race. He's 2-for-2 around two turns here at Saratoga, so that's encouraging as well. He's finally matured and putting it all together.”