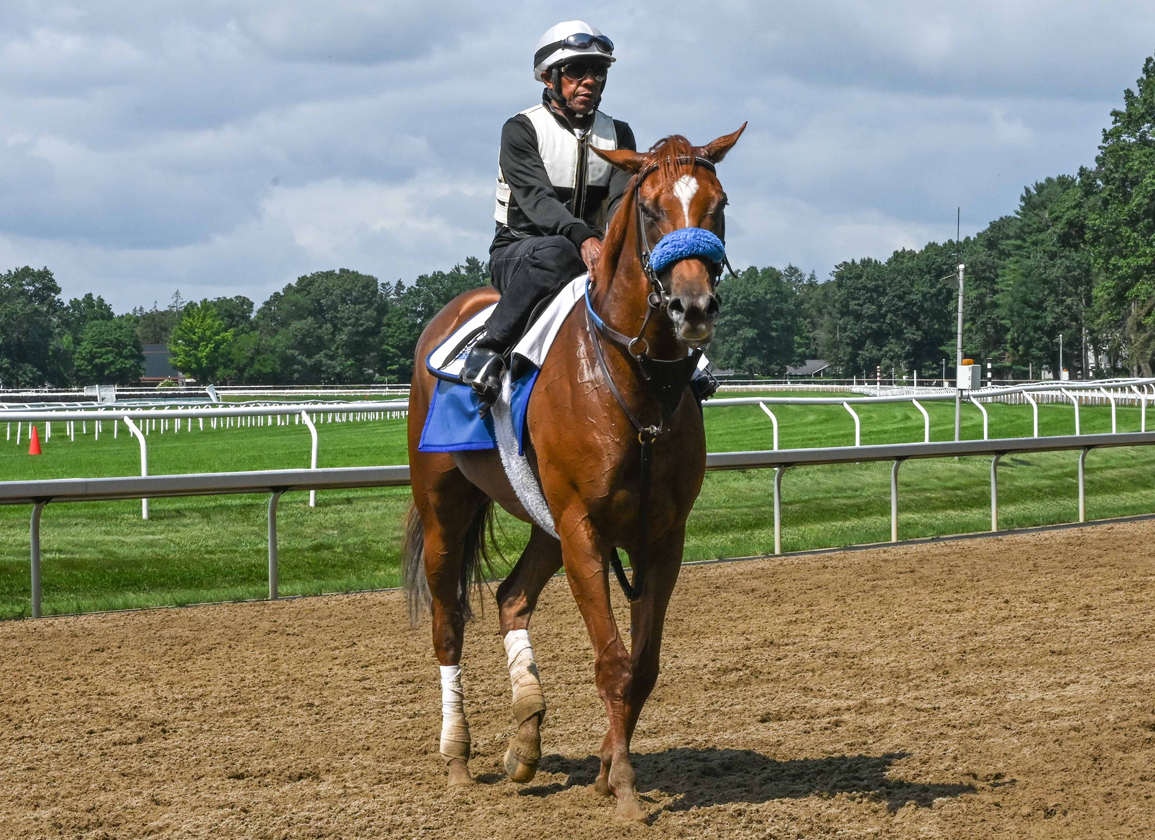 McPeek said that the EHV-1 quarantine that has affected his barn at Saratoga prompted him to reschedule his plans for Peter Callahan's 4-year-old filly, the winner of the 2020 Preakness against colts. She was originally scheduled to run in the GIII $200,000 Shuvee this Sunday and then the GI $600,000 Personal Ensign on Aug. 28, but the quarantine in his barn has prevented him from entering any horses at Saratoga. He said his stable has already missed 20 starts at Saratoga and he was adjusting plans for other stakes horses.

“If Swiss Skydiver were to win the Whitney after all of this, it would probably be a bit of a silver lining for it all,” McPeek said.

Should Swiss Skydiver run in the 1 1/8 miles $1 million Whitney, she will be face males for the third time in her career. She finished second in the GII Blue Grass last July at Keeneland and edged Kentucky Derby winner Authentic (Into Mischief) in the Preakness. Authentic went on to win the GI Breeders' Cup Classic and was voted Horse of the Year.

Beginning with Black Maria in the inaugural running of the Whitney in 1928, six females have won Saratoga's top dirt stake for older horses. The most recent winner was the never-beaten Hall of Fame member Personal Ensign in 1988.

The Whitney will be Swiss Skydiver's first start since finishing third in the GI Apple Blossom on April 17 at Oaklawn Park. He had targeted the Shuvee as a steppingstone to the Personal Ensign instead of trying the Whitney-Personal Ensign double.

“I felt like she needed to get back into winning ways because she's kind of had a few hiccups this spring,” McPeek said. “But she's doing super now. And she's quite capable of winning the Whitney off the layoff and then that gives her three weeks to come back into the Personal Ensign.”

The New York Racing Association, Inc. (NYRA) and the New York State Gaming Commission (NYSGC) have placed Barn 86 at Saratoga Race Course under a precautionary quarantine until further notice due to a positive case of Equine Herpesvirus-1 in that barn. The unnamed, unraced filly, who is trained by Jorge Abreu, was sent to Rood & Riddle Equine Hospital on Sunday, July 11 after developing a fever. She was subsequently tested for a number of potential ailments, and a positive test for EHV-1 was returned on Thursday afternoon. The filly began treatment immediately, and is improving under the care of Dr. Luis Castro, DVM.

NYRA has announced that during the length of the 21-day quarantine, retroactive to July 11, no horses can train with the general population or enter races. The quarantine is scheduled to run through August 1, should no additional horses test positive, which is standard protocol in New York. The horses in Barn 86 train on the Oklahoma track daily after regular training hours are over.

McPeek said he was notified that his horses had landed in quarantine at 8 p.m. on Thursday, opening day of the 153rd racing season in Saratoga. It is the first time in his career, he said, that his stable has been shut down by a quarantine. So far, all of McPeek's horses are fine.

The restriction on entries will prevent McPeek from running three-time graded stakes winner Crazy Beautiful (Liam's Map) in Saturday's GI Coaching Club American Oaks. She will train up to the GI Alabama. Tabor Hall (Candy Ride {Arg}) will also miss the CCA Oaks and McPeek now has her pointed to the G1 seven-furlong Test on Aug. 7. McPeek had planned to prep GII Stonestreet Lexington winner King Fury (Curlin) for the GI Travers in the GII Jim Dandy on July 31, but will miss that race by one day.

“I won the Travers training the horse up to it,” McPeek said. “I won with Golden Ticket (Speightstown) (in the historic dead-heat 2012) and he was coming off a (four-month) layoff. It's do-able.”