Superpowers Face Off Again In The Oaks 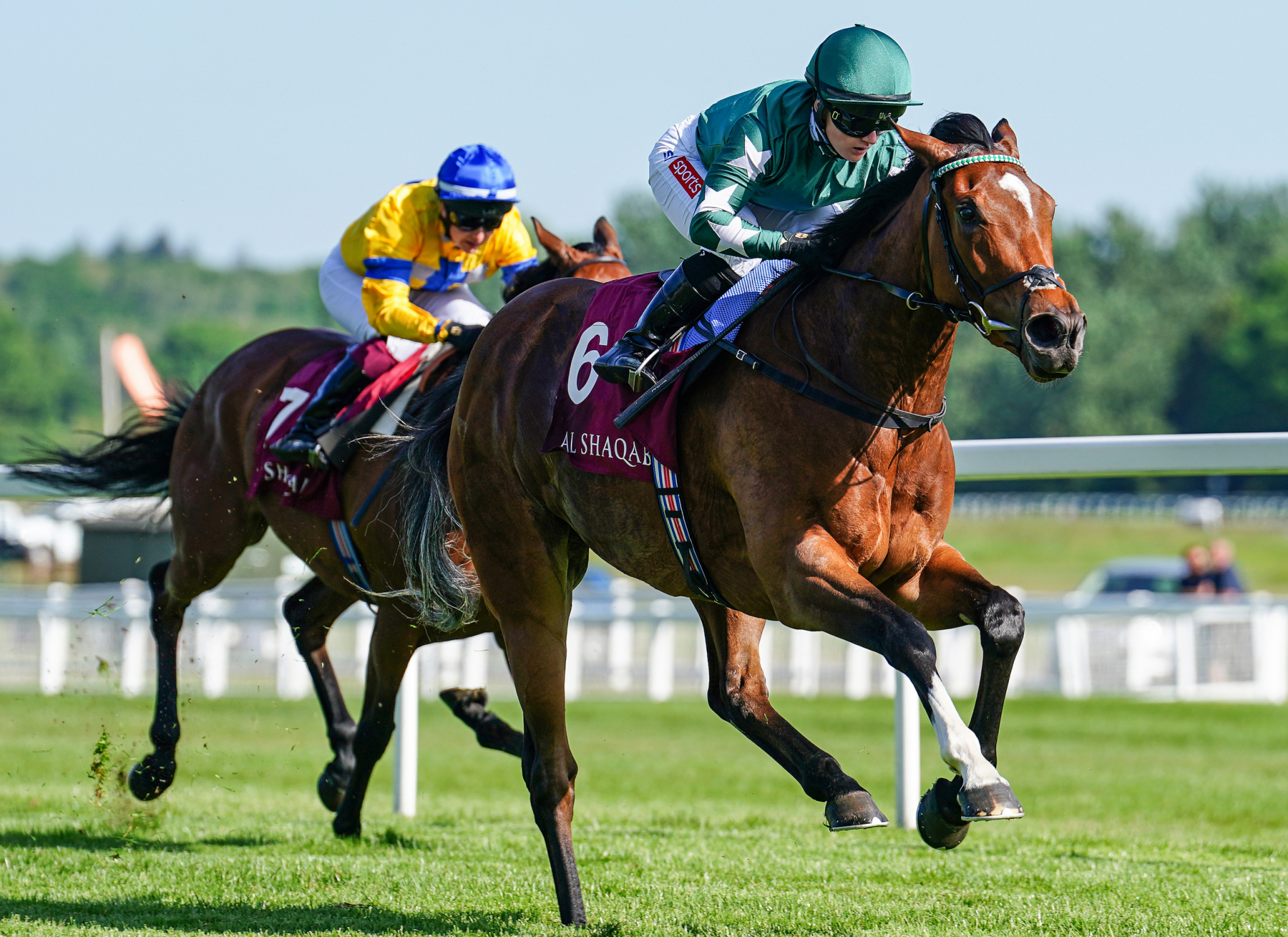 With the last eight winners of the G1 Cazoo Oaks hailing from Ballydoyle or Clarehaven, this particular rivalry is taking on epic proportions unmatched in the great Epsom Classic's history. Not even the duels between the race's record holder Robert Robson and Dixon Boyce in the early 19th century and between the current Rosegreen maestro and the late Sir Henry Cecil at the end of and beginning of the 20th and 21st enjoyed such mutually-exclusive domination. There is more than a strong chance that it will be extended on Friday, with the John and Thady father-and-son partnership boasting a pair of TDN Rising Stars Emily Upjohn (GB) (Sea the Stars {Ire}) and Nashwa (GB) (Frankel {GB}) who occupy the top two slots in the betting and Ballydoyle thrusting the Classic-placed Tuesday (Ire) (Galileo {Ire}) and Concert Hall (Ire) (Dubawi {Ire}) into the fray.

One of the positive aspects of having so many Oaks winners in such a short space of time is the advantage it gives in assessing the latest contenders and the Gosdens have some rare reference points to measure Emily Upjohn against. Apparently more in the mold of Taghrooda (GB) than Enable (GB), she shares Sea the Stars as a sire and an Aga Khan family with the former and comparisons are obvious. Her dam Hidden Brief (GB) (Barathea {Ire}) is a half-sister to the dam of the sire's Derby and Irish Derby hero Harzand (Ire), so with all that and the race record to match there is little in the way of chinks in the armour. Frankie is a touch concerned about the ground, however.

“There's been a fair bit of rain around, and even though it was quite slow at York I would prefer to have her on good ground,” he said. “She's a young filly that is learning all the time and I don't think she's got a bad bone in her really–she just wants to please you all the time.”

Will It Be Hollie Or Tom?

As the first husband and wife to ride against each other in a British Classic, Tom Marquand and Hollie Doyle will enjoy their fair share of the attention on an already-special weekend. Both are on authoritative winners of Oaks trials and while Imad Alsagar's Nashwa drew much admiration for her dashing win in Newbury's Listed Haras de Bouquetot Fillies' Trial S. May 14, Teme Valley's Tranquil Lady (Ire) (Australia {GB}) seems to have slipped under the radar despite her impressive display in Naas's G3 Blue Wind S. May 7. As a half to the fellow Joseph O'Brien-trained State of Rest (Ire) (Starspangledbanner {Aus}), the latter seems certain to progress again and unlike Nashwa, stamina can be taken on trust.

Two of Friday's protagonists met at Newmarket in October, with Kirsten Rausing's Kawida (GB) (Sir Percy {GB}) emerging on top in the Listed Montrose Fillies' S. where Godolphin's With the Moonlight (Ire) (Frankel {GB}) was third. While the latter has jumped to the fore of the betting after winning a hollow renewal of the Listed Pretty Polly S., the Ed Walker-trained Kawida has been overlooked despite a fine comeback effort when third in Saint-Cloud's G3 Prix Cleopatre Apr. 29. Related to the top-class Australian import Zaaki (GB) (Leroidesanimaux {Brz}), the homebred should appreciate moving up to a mile and a half and any further unexpected rain.

Friday's action also sees the G1 DahlBury Coronation Cup, where last year's winner Pyledriver (GB) (Harbour Watch {Ire}) bids to add to the increasingly popularity that is often accorded to horses who come back here year upon year. William Muir and Chris Grassick have kept the 5-year-old's powder dry following a luckless fourth in Meydan's G1 Sheema Classic Mar. 26, form which has been boosted by Alenquer (Fr) (Adlerflug {Ger}). He has Godolphin's still-unexposed Manobo (Ire) (Sea the Stars {Ire}) to beat, but another win would equal the feats of Petite Etoile, Triptych and Warrsan (Ire) and compensate for his Dubai hard-luck story.

“Pyledriver ran a fabulous race in Dubai, but Frankie came back in and held his hands up and said he was sorry,” trainer William Muir told QIPCO British Champions Series. “He said he knew the track like the back of his hand and you always get a split up the rail, but he waited and waited and it never came. He said it cost him two lengths, and he was only beaten three-quarters of a length so you can work it out for yourselves. He said he should have won, but it was a great run and we've aimed at this race since.”

Derby Draw Is Made

Saturday's G1 Cazoo Derby sustained only one loss at Thursday's confirmation stage and with that being the already-announced one of Prince Faisal's Eydon (Ire) (Olden Times {GB}), there are no concerns regarding field size for the 243rd staging of the Blue Riband of The Turf. With 17 due to line up at Epsom, the always-vital draw takes on that extra import with low numbers again under scrutiny despite last year's winner Adayar (Ire) (Frankel {GB}) overcoming the “hoodoo” stall one. This time, it is Highclere Thoroughbred Racing's May 12 G2 Dante S. runner-up Royal Patronage (Fr) (Wootton Bassett {GB}) who will depart from the lowest stall, with Juddmonte's Apr. 22 G3 Sandown Classic Trial winner Westover (GB) (Frankel {GB}) next door in two which has yet to house a winner of the race since stalls were introduced.

Others who have a low draw to overcome are Peter Brant's colour-bearer Stone Age (Ire) (Galileo {Ire}), winner of the Leopardstown's May 8 G3 Derby Trial, in four and Godolphin's supplemented Apr. 29 Listed Newmarket S. scorer Nations Pride (Ire) (Teofilo {Ire}) in five. Rob Hornby renews his association with the Ralph Beckett-trained Westover and was only positive about being handed stall two. “I'm happy with that–I'll take it,” he said on Thursday. “The Johnston horse is in one and Stone Age is in four, so I've got bits and pieces around me that I like. He can go forward from that draw and it's all real now–I'm just really looking forward to the opportunity now.”

Charlie Appleby was also unconcerned about Nations Pride's post position on Thursday as he spoke to QIPCO British Champions Series. “Being drawn in five is a nice draw,” he said. “He is a horse with plenty of experience having already been out to Dubai. The first half of the race everyone will be jostling for a good position and he is a horse that has got natural pace. From that draw, William can hopefully park him up where he feels it is right to be.”

If draw matters at Epsom, it is crucial at Chantilly with the last G1 Qatar Prix du Jockey Club winner to have been drawn in double figures being New Bay (GB) in 2015. Due to the withdrawn Point Lonsdale (Ire) (Australia {GB}) being left in the bowl as the balls were selected on Thursday morning, France Galop opted to re-do the draw at 5 p.m. which is sure to spark controversy for those who suffered a twist of fate. The advantage of a low number is obvious with the turn coming up fast and while the initial draw spared most of the main protagonists the agony of a wide post that was not the case after the revised version. Godolphin's May 15 G1 Poule d'Essai des Poulains hero Modern Games (Ire) (Dubawi {Ire}) had a respectable draw in eight at first, but drew 13 later in the day while Jean-Pierre-Joseph Dubois's May 8 G2 Prix Greffulhe winner Onesto (Ire) (Frankel {GB}) had been in nine and was re-drawn in 14. The Aga Khan's May 10 G3 Prix de Guiche scorer Vadeni (Fr) (Churchill {Ire}) went from stall four to two, but fellow Jean-Claude Rouget trainee Al Hakeem (GB) (Siyouni {Fr}) was another to suffer in the second draw. Al Shaqab Racing's May 3 Listed Prix de Suresnes winner originally held the six berth, but ended up in 11.