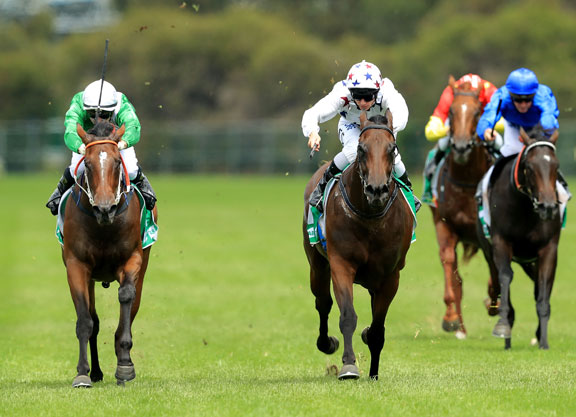 Magic Millions 2YO Classic winner Sunlight (Aus) (Zoustar {Aus}) justified favouritism for the G1 Golden Slipper on Mar. 23 with a win in Saturday's G2 Silver Slipper S. at Rosehill. Sunlight initially took a tow into the race from 'TDN Rising Star' Estijaab (Aus) (Snitzel {Aus}), but that pair were soon overwhelmed by another 'TDN Rising Star', Neutrality (Aus) (Sebring {Aus}), who made a bold move approaching the 600 to assume the lead. Estijaab on the rail reclaimed the lead from Neutrality as they straightened while Sunlight moved three-wide for clear runway. The race soon came down to the fillies Estijaab and Sunlight, that pair drawing seven lengths clear of the eventual third-placed Gongs (Aus) (Dawn Approach {Ire}), and while Estijaab put in a valiant effort at second asking Sunlight overhauled her approaching the 50 metre mark to win by a quarter length. Calvin McEvoy, assistant to trainer Tony McEvoy, said Sunlight would next contest the G3 Magic Night S., replicating the seven-day backup she used into the Magic Millions.

“I think we learnt something about her today,” McEvoy told racingnsw.com.au. “When the other two decided to go out in front, Tim asked her to come back and she did. She raced like a true professional. It was all class. She was forward enough and we knew she'd run well but there is still improvement to come which is why I have a big smile on my face.”

Sunlight and Estijaab are now at 4-1 and 5-1, respectively, for the Slipper. Saturday's G1 Blue Diamond S. winner Written By is at 13-2.