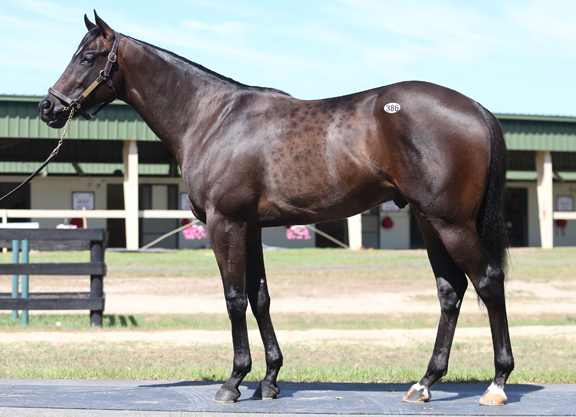 Ambivalent at OBS | Photos by Z

Wesley Ward has a pair of Keeneland-based juveniles entered in this spot. Breeze Easy’s Roderick (Into Mischief) was a $550,000 KEESEP yearling and is a full-brother to two-turn GSW One Liner. He hails from the extended female family of highest-level winners Albertus Maximus, Daredevil and King Charlemagne. Roderick’s stablemate Copley (Air Force Blue) is from a Ned Evans family that includes the likes of Grade I winners Swagger Jack and Malibu Prayer. Winfromwithin (Into Mischief), just a $100,000 September yearling, was produced by a half-sister to turf MGSW and MGISP Shakis (Ire) (Machiavellian). Zebra Cake (Runhappy), yet another September buy ($200,000), is out of a half to GSW Mo Tom (Uncle Mo) and SW and MGISP juvenile Beautician (Dehere). Further down the page is talented GII Black-Eyed Susan S. winner Red Ruby (Tiznow). Peter Vegso homebred Berhanu (The Factor) is out of a debut and stakes-winning full-sister to GSW juvneile Aegean (Northern Afleet). TJCIS PPs