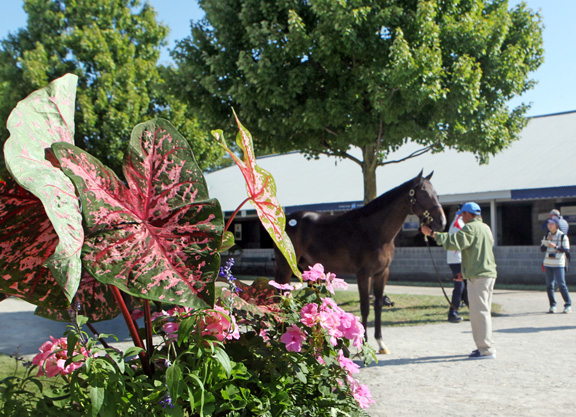 Well, most of the bears still seem to be in their lairs. The U.S. economy, with an election year often proving a reliable surety, continues to motor along. Nonetheless it was just possible to detect a first, mild twinge of hesitation in the level of business done through the summer yearling sales.

Those bears who are out sniffing the air would appear to have one or two legitimate anxieties: about trade wars, most obviously; about intimations of recession over the pond; and, more broadly, about the instabilities of societal and geopolitical division. Nonetheless, those bloodstock professionals convening in Lexington for the world's biggest yearling auction will remain complacent that the most affluent in society–on whom they depend no less than dealers in yachts, or classic automobiles, or collectable art–are continuing to reap most benefit from the way the post-2008 recovery was managed.

The bloodstock bull run has been sustained by liquidity steroids prescribed by the fiscal physicians after the banking crisis. After a period of consolidation, the top auctions either side of the Atlantic collectively began to make wild gains. In 2012, the combined pre-fall yearling market in North America–that's to say, the three Fasig-Tipton sales that get the ball rolling (July in Lexington, plus the Select and New York Sales at Saratoga) plus the September Sale–was worth $275,719,000. Last year, it weighed in at an eye-watering $478,188,900.

Keeneland September, being on such an industrial scale, accounted for more than three-quarters of that tally, recording transactions totalling $377,130,400 for an astonishing 22.5% leap on its 2017 business. Its $129,335 average meanwhile gained another 7.3% on the record set the previous year.

Needless to say, the experience of such a wide marketplace proved uneven. The second week, for instance, dragged the median back from the $57,000 record of 2017 to $50,000. At the other end of the market, the number of seven-figure dockets more than doubled, from 13 to 27.

So it would be churlish to generalize expectations for all participants this time round. Sheer numbers guarantee the full spectrum of case histories. For every home run celebrated by one consignor, the next will run home (and barefoot).

Nonetheless let's try to get some sense of the way the wind may be blowing, by scoring Fasig-Tipton's summer overture. Because between the July Sale and Saratoga, with its elite and state-bred elements, we do get a pretty broad market sample.

On the other hand, the thriving state-bred scene in New York (both on the track and in the ring) had no such mitigation for relapsing from last year's stellar numbers. The 12.4% drop in gross reverted almost precisely to its 2017 level, but the average (slightly) and median (more significantly: $60,000 against $69,500) dipped below those recorded that year.

While it certainly hasn't always been the case–their post-2008 recoveries were not symmetrical–over the past two years the Fasig-Tipton summer sales have proved a pretty accurate barometer for Keeneland September. In 2017, the gross gained by 13.8% and 12.1%, respectively; last year, by 18.4% and 22.5%. So it might be that Keeneland should be well satisfied if able just to tread water from Monday.

Perhaps the market has simply been going at an unsustainable gallop, at least at its top end; and the summer sales just needed to stabilize at a somewhat more viable level. Pinhookers, for instance, have been queasily raising the stakes, year after year, and requiring corresponding inflation in the resale market. North American juvenile sales tipped $200 million for the first time this year, for instance, but the margin for error has become ever more precarious.

Perhaps, however, other fissures might be quietly beginning to open. We should find out a little more, one way or the other, over the next couple of weeks.

For this sale offers a uniquely comprehensive snapshot of the market. And whatever their trepidation or optimism, there is one teasing certainty for those browsing the 4,644 yearlings listed across 13 sessions. Within the next couple of years, they will all be taking a catalogue back down off the shelves, to see what they scribbled next to whichever hip has meanwhile been revealed as a Classic winner, a champion, maybe a Horse of the Year.

For now, horses of that ilk remain needles in the haystack: lurking somewhere among that warren of barns, scoured for two weeks solid by footsore prospectors. The sheer volume of traffic will virtually guarantee that some of them are going to be missed, especially after the big shots leave town next weekend. Remember that Midnight Bisou (Midnight Lute), who recently won her third Grade I prize of the year, was led out unsold for $19,000 as hip 4015 in 2016. But the annals show that the eventual graduation of elite runners, from every level of the market, is as inexorable as the turning of leaves in the fall.

In fact, the ritual, cyclical nature of this unique staging post in the bloodstock calendar is such that Book 1 already registers something of the “future nostalgia” latent in its pages. For among the horses decorating the front cover is Roaring Lion (Kitten's Joy), who was also purchased at the 2016 sale–by David Redvers, as hip 127, for $160,000–and went on to become champion of his generation in Europe. It was only a few days ago, of course, that this indomitable creature succumbed to colic in New Zealand.

And on the back you'll find Vino Rosso, who made $410,000 as hip 528 that same year. He was found–in the same Glennwood Farm consignment that produced hip 50, a $500,000 Scat Daddy colt, to become Triple Crown winner Justify–by Jimmy Crupi.

Unlike Roaring Lion, whose loss came out of a clear blue sky, Crupi had long battled health issues before he died in May. But he, too, was an inspirational fighter; and it was hard to resist a sense of some benign intervention of fate when Vino Rosso won the GI Gold Cup at Santa Anita just a couple of days after his passing. So who can say what tales of triumph and tragedy will in time be woven into the pages of the 2019 catalogue?

Perhaps the one and only certainty is that a market that gives them considerable exposure in the first place will prove equally culpable in now starting to judge the new sires prematurely.

Extrapolating trends of any kind from a boutique sale is always hazardous, so there's limited point judging any of their yearlings glamorous enough to be granted a stall for the Select Sale at Saratoga. For what it may be worth, however, let's assess the rookies on the dividends achieved through their more precocious types across all three summer sales.

As in the past, I'm ranking their averages against the number offered, rather than the number sold. True, the odd yearling is unsold because so highly regarded, with a correspondingly ambitious reserve. Frosted ($275,000, $200,000), Outwork ($230,000), California Chrome ($195,000, $175,000) and Exaggerator ($150,000) are among those with yearlings expensively retained this summer. Overall, however, I feel the traditional approach–calculating averages per yearling sold–is even less fair. It penalises those stallions who process a higher percentage; and rewards those whose less attractive stock is led away unwanted. (This data, incidentally, is based on TDN's constantly updating tables of sale statistics.)

It would be ludicrous to read too much into these first skirmishes, given the tiny size of the sample relative to most books. Certainly nobody should be losing any sleep over a quiet start by some stallions of a very different profile from, say, Outwork, who himself won on debut over 4 1/2 furlongs at Keeneland in April and has already sent no fewer than 24 yearlings through the ring (and pretty profitably).

That said, legitimate plaudits go to Runhappy. The Claiborne stallion found a new home for all 10 of his yearlings under the gavel this summer–and at 10 times his opening fee. He is followed by Nyquist, who has been cheerfully punching his weight with all but one sold at six times his marquee tag. These two set up shop in Book 1 with 11 and eight, respectively.

Meanwhile, of course, there's plenty of other quality bubbling under. Those beyond the parameters of this table include Calumet's hardy turf champion Big Blue Kitten, hardly an Outwork. He has been represented by a solitary filly to date, and she made $130,000. Then there are the three yearlings offered (and sold) to date by Flintshire (GB), who looked good value at an opening $20,000 yet has already been trimmed to $15,000: these include a $210,000 colt. And how about this from Firing Line? Standing at Crestwood for $5,000, he has so far been represented by one colt and one filly, respectively bringing $110,000 and $50,000.

It's on the racetrack, of course, that we should sooner be judging all these stallions. So we'll assess the market's overall treatment of stallions, proven and unproven, after the sale.

The Book 1 format has been tweaked yet again, incidentally, sensibly compromising between a single evening in 2017 and four full days last year. Three shorter sessions, this time, address the grievances of those consignors who last year felt that Book 2 types had forfeited the limelight with their absorption into Book 1.

There's never been a horse sale in the history of the breed, of course, where absolutely everybody has gone home happy. So good luck to all of you for whom months of work are about to be reckoned in the space of a minute or two. May you get your due reward; and, above all, may your horse find a new home that makes you both comfortable.