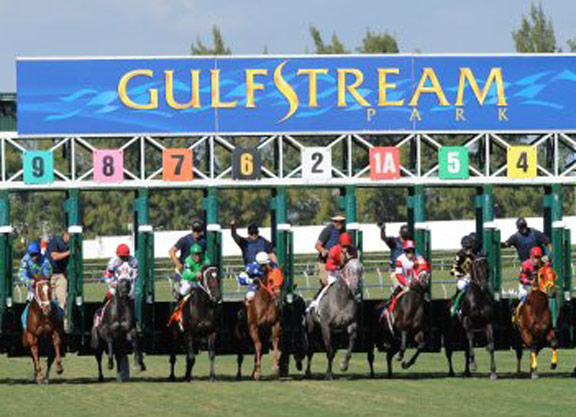 Six racetracks owned by The Stronach Group collectively sued the parent company of DerbyWars in a California federal court Dec. 2. The two most serious of four allegations are that “bets” made through the Louisville-based online fantasy horse racing portal constitute “racketeering activity” that violates the Racketeer Influenced and Corrupt Organizations Act (RICO), and that DerbyWars is “indisputably a form of wagering” that operates without the tracks' consent in violation of the Interstate Horse Racing Act (IHA) of 1978.

Two other complaints in the suit allege violations of California Business & Professions Code (section 17200), which regulates “unfair or fraudulent” business acts, and Intentional Interference With Prospective Economic Advantage, which is a law that covers third-party disruptions of profitable business relationships.

The dollar amount of the collective damages being sought is not specified; according to the suit, the damages are to be “proven” and “determined” at the trial.

Of the four charges, the RICO allegations are potentially the most devastating, because as a law designed to combat organized crime, RICO victims–once liability and the extent of harm are established–are entitled to mandatory triple damages.

The legality of daily fantasy sports gaming–and under that wide umbrella, the narrower sector of racing-specific fantasy game play–has exploded as a polarizing topic nationwide over the past six months.

In late November, TDN ran a two-part story on the subject: Part 1 of the series examined whether fantasy gaming represented a threat or an opportunity for the racing industry. Part 2 contrasted the views of proponents of fantasy racing (who frame the game play as a means to market the sport while growing interest and educating customers) against those who oppose it (chiefly on the grounds that fantasy gaming usurps the racing product while not directly contributing to the sport's revenue stream).

The Stronach tracks' lawsuit was not entirely unexpected. At an Oct. 21 California Horse Racing Board committee meeting, Scott Daruty, an executive with The Stronach Group, called fantasy racing a “very significant threat to our existing business model” while testifying that “we're trying to fashion an argument to shut them down and prevent them from stealing our product.”

On Thursday, the day after the Stronach tracks made good on that threat by filing the lawsuit in the United States Central District Court of California, Daruty explained to TDN the reasoning behind the litigation and why it targeted only DerbyWars and not any other fantasy racing entities or contest sites.

“It's something we've had our eye on for awhile,” Daruty said. “And as it was growing, not just at DerbyWars, but proliferating with similar entities doing similar types of things, we thought this is good time to bring our lawsuit. We're very confident that it's going to give clarity to the law, and then we can act accordingly, not just with DerbyWars, but with all other operators.”

Mark Midland, the founder Horse Racing Labs, emailed a statement in response to a request for a phone interview.

“I have dedicated my entire career to advance the sport of horse racing,” the statement read, in part. “This passion and love for the sport is shared by our entire team. As the industry has acknowledged time and time again, the sport is in dire need of new ideas and innovation to ensure growth for the future. More than 70 million Americans are participating in fantasy sports, and contests are an opportunity that needs to be explored for horse racing…The claims in the lawsuit serve to call into question all contests in horse racing.”

Daruty said that unlike in New York, where the state attorney general has moved to protect the interests of licensed, legal betting entities by attempting to shut down daily fantasy sports sites like FanDuel and Draft Kings, The Stronach Group saw no government entity willing to step up on behalf of its racetracks. The collective belief of the tracks, the lawsuit alleges, is that fantasy racing sites are operating as illegal, unlicensed bet-takers whose “games of skill” assertions go against the spirit and the intent of the IHA, the Federal Wire Act, and the Unlawful Internet Gambling Enforcement Act (UIGEA).

“As a private company, we're mindful of the time and expense and other resources that need to be dedicated to this,” Daruty said. “It would seem to make sense to us to look to the biggest operator first, and try to establish what the precedent is going to be moving forward, and from that point let the precedent filter out to everybody else, as opposed to trying to take on the whole world at one time.”

In early November, Midland told TDN that DerbyWars is fantasy horse racing's “leader in terms of the best site and the biggest games.” But he asserted that fantasy racing does not constitute gambling because its entry-fee-for-cash-prize contests are modeled on a “tournament” or “leaderboard” style of play that is based on a series of race results that exist in the public domain, and that winners of such contests are not determined by the direct outcomes of individual races.

Midland further explained that critics of fantasy racing are missing a key point: That games like DerbyWars return to the industry benefits not measured so much in dollars, but in terms of fan education, product exposure and cross-promotional marketing.

Midland also asserted at that time that Horse Racing Labs does not turn a profit from DerbyWars.

“Obviously, there is a difference of opinion, with the fantasy operators thinking the eyeballs they bring to the sport should be compensation enough, as opposed to us thinking that other forms of wagering generate direct revenue to our sport,” Daruty said. “We think that fantasy [gaming] should do the same.”

Daruty said that prior to filing the lawsuit, the Stronach tracks attempted “high-level discussions” with DerbyWars to reach a resolution about how fantasy racing might be able to become a sanctioned part of the revenue stream, but the talks yielded “nothing specific as to trying to resolve all issues moving forward.”

Midland did not respond to an emailed request prior to deadline for this article asking for his side of the story about negotiations with Stronach officials.

A copy of the lawsuit, which was first posted online by the Paulick Report and is available to view here, outlines the litigation strategy the plaintiffs will need to prove in order to prevail in court. Chief among the allegations are:

1) DerbyWars is “not in compliance with federal or state laws because the consents required under the IHA have not been given”; 2) DerbyWars does not hold a license permitting it to accept wagers from California, Florida, Maryland, or Oregon (the locations of the five plaintiff tracks); 3) DerbyWars “does not come within” the fantasy sports carve-out set forth in the UIGEA; 4) The actions DerbyWars “have (and continue to) directly cause damages to plaintiffs by depriving them of the compensation to which they are entitled” and;

5) “DerbyWars used and invested income that was derived from a pattern of racketeering activity in an interstate enterprise under state and federal law.”

The racketeering accusation appears to be the most difficult aspect of the lawsuit to prove, but because the complaint is made under the RICO law, it carries the steepest potential for penalization with its “mandatory treble damages” stipulation.

According to the 2010 book “Civil RICO: A Definitive Guide,” the original 1970 purpose of RICO sought “the eradication of organized crime in the United States” and to “curb the infiltration of legitimate business organizations by racketeers.” Increasingly though, RICO has been used as a litigation cudgel in civil complaints, leading to jurisprudential criticism that the statute's lucrative triple-damages clause causes it to be over-used outside of its intended purpose.

The 2011 book “Understanding White Collar Crime” points out that unlike in criminal cases, where RICO must be proven “beyond reasonable doubt,” in civil cases, the burden of proof for RICO is a “preponderance of the evidence,” and that a “substantial majority of civil RICO cases are resolved in favor of the defendants prior to trial.”