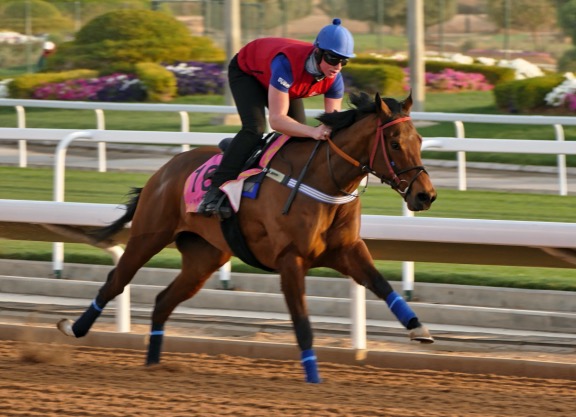 The first three home in last year's Red Sea Turf Handicap have all returned to Riyadh for this $2.5 million staying contest over 3,000 metres. The trio is led by the George Strawbridge homebred Call The Wind (GB) (Frankel {GB}), whose victory over Mekong (GB) (Frankel {GB}) and Prince Of Arran (GB) (Shirocco {Ger}) was followed through the French summer with wins in the G3 Prix de Barbeville and G2 Prix Kergorlay.

Freddy Head, who arrived in Saudi in time to see the 7-year-old have an easy canter on Thursday morning, said, “The lads are happy with him and I am very happy with him. The preparation has gone well and he looks to be in the same form as last year.”

Jamie Osborne was another Thursday arrival at the track to check up on Khalid Bin Mishref's Mekong, who had made just one start after last year's Saudi Cup meeting when fifth in the Gold Cup at Royal Ascot. He reappeared for a tune-up at Wolverhampton on Jan. 18 in the countdown to his overseas trip.

Mekong has not been seen on the main track in the mornings this week and his trainer explained why. “He is an interesting character,” said Osborne. “He has a tendency to plant himself and when we brought him to the track last year to do his thing, we couldn't get him to go anywhere. That's normal for him. So we shock him into it, in the sense that he is a horse that needs to have his routine changed regularly, because he gets used to something and then he resents it. So the first time he will see the track is when he runs.”

The hugely popular Prince Of Arran appears to be exactly the opposite. Routinely the first out in the morning among the internationals, the 8-year-old exercises willingly in partnership with rider Aled Beech and seems to retain plenty of enthusiasm after a number of overseas trips. He will jump from stall four under Frankie Dettori, two outside Call The Wind, who has the services of Olivier Peslier.

Nine of the 13 runners hail from European stables, with Mark Johnston's Mildenberger (GB) (Teofilo {Ire}) having drawn the rail for his first start since winning an All-Weather Championships fast track qualifier over an extended two miles at Wolverhampton in January.

Charlie Appleby's quartet for the meeting arrived from Dubai on Wednesday and he has the lightly-raced Secret Advisor (Fr) engaged in this event. The 7-year-old has not raced since early November but he undertook a racecourse gallop at Meydan last week which his trainer said has put him spot-on for this assignment.

The Neom Turf Cup has been blessed with the presence of America's champion turf horse, Channel Maker (English Channel), who accompanied his Bill Mott stable-mate Tacitus to Riyadh in order to take part in this 2,100-metre test. The 7-year-old was just a length behind Tarnawa (Ire) (Shamardal) when third in the GI Breeders' Cup Turf, his final start in a 2020 campaign which saw him win back-to-back Grade 1s at Saratoga and Belmont. He does, however, appear to be more effective when stretching out to a mile and a half.

In his time, Gronkowski (Lonhro {Aus}) has been trained in Britain, America and Dubai, but the 2018 Belmont S. runner-up is now trained locally in Saudi by Abdulaziz Bin Mishref. To be ridden by Olivier Peslier, he has drawn stall seven in the field of 12, which has also lured runners from Britain and Ireland.

Willie Mullins may be more focused on preparing his battalions for the Cheltenham Festival next month but he will be represented in Saudi on the Flat by the globetrotting mare True Self (Ire) (Oscar {Ire}), who was last seen winning the G3 Queen Elizabeth S. at Flemington in November for the second year in a row. Hardy and versatile, the 8-year-old's 10 wins have come between 10 furlongs and two miles, as well as over hurdles. This is her second trip to Saudi after running sixth in the Red Sea Turf H. last year.

The Adrian McGuinness-trained Saltonstall (GB) (Pivotal {GB}) was in great form in Ireland last autumn when winning his final three races of the year over a mile.

The trainer's son Tadhg has been riding him in the mornings in Riyadh and gave him a spin round the grass track on Thursday.

“He took a good pull and handled the surface,” said the trainer following that exercise. “He's just done a nice, steady canter and quickened a little bit up the straight just for half a furlong. We're delighted with him and he came back great.”

A contender who should not be overlooked is Juddmonte's Tilsit (First Defence), who has made just four starts for Charlie Hills for two wins, including the G3 Thoroughbred S. at Goodwood.

Described as a little quirky by his rider Henry Morshead, the 4-year-old has nevertheless behaved well in the mornings and looks to be in terrific form ahead of his first start since chasing home Kameko (Kitten's Joy) when fourth in the G2 Joel S. at Newmarket in September.

Blues The One To Beat In Turf Sprint

The stc 1351 Turf Sprint takes its unusual distance of 1,351 metres from the year in the Islamic calendar in which the Kingdom of Saudi Arabia was founded (1932 in the Gregorian calendar).

It's a trip which will certainly suit the class act in the field, Space Blues (Ire) (Dubawi {Ire}). Granted, he hasn't been seen in the heat of battle since winning the G1 Prix Maurice de Gheest last August, but that victory completed a faultless string of four progressive runs in Europe last summer which marked the 5-year-old as a sprinter of huge potential. Gifted stall two in the draw, he has wintered in Dubai and travelled to Saudi on Wednesday with his stable-mate and rival Glorious Journey (GB) (Dubawi {Ire}), who was third in last year's race from a wide draw and has a slightly better starting point this year in gate nine.

Last year's winner Dark Power (Ire) (Dark Angel {Ire}) was one of two on the inaugural Saudi Cup card for Bahrain. The 7-year-old is trained by British ex-pat Allan Smith and returns to defend his title this year with Frankie Dettori booked to ride.

Momkin (GB) (Bated Breath {GB}), the half-brother of Saudi Cup challenger Mishriff (Ire) (Make Believe {GB}), is another repeat performer, who was seventh last year. He has left Britain and is now trained in Saudi by Abdullah Mushrif, as has the former Richard Hannon trainee Urban Icon (GB) (Cityscape {GB}), who is now representing Fahad Saad.

As well as being represented in the Saudi Cup by Charlatan, WinStar Farm's veteran Speightstown has the likely favourite for the $1.5 million Saudi Arabian Airlines Riyadh Dirt Sprint in Japanese raider Matera Sky, as well as recent G3 Dubawi S. winner Switzerland. Trained by Hideyuki Mori for Tsuyoshi Ono, the 7-year-old Matera Sky was runner-up in the 1,200-metre contest last year and has also made appearances at the Dubai World Cup and Breeders' Cup meetings.

“He is a proven shipper and he gained 10kg of weight during the flight from Japan to Saudi Arabia,” said Mori. “He can take a lead and use his natural speed to the finish. We will not change any tactics and his inside draw will be an advantage for us. He has trained very well since he has arrived.”

Matera Sky faces not just last year's winner, the Fahad Saad-trained New York Central (Tapit), but an intriguing runner from Britain in last season's G1 July Cup winner Oxted (GB) (Mayson {GB}). Now five, Roger Teal's stable star is racing on dirt and round a bend for the first time but the trainer and his son Harry, who rides Oxted in the mornings, have both been very bullish about the gelding's condition since arriving in Riyadh, as well as his ability to handle the dirt surface.

The truly international $1.5 million contest, which features 14 runners from Saudi Arabia, America, Britain, Ireland and Japan, will also be the first experience on the dirt for Brad The Brief (GB) (Dutch Art {GB}), a Group 3 winner on heavy ground in Chantilly last October for Tom Dascombe and his breeder Andrew Black's Chasemore Farm, but the 4-year-old is versatile when it comes to the going, and has also won on quicker ground at Bath as well as Wolverhampton's synthetic surface.

Harry's Bar (GB) (Exceed And Excel {Aus}), one of two runners at the meeting for Ireland's Adrian McGuinness, has good recent form on another synthetic surface at Dundalk, where he has won his last two starts over six furlongs.

Proven on the dirt is another of the three Japanese challengers, Justin (Jpn) (Orfevre {Jpn}), who won the GIII Capella S at Nakayama in December.

The Saeed Bin Suroor-trained Soft Whisper (Ire) (Dubawi {Ire}) was the emphatic winner of the UAE 1000 Guineas on her most recent start at Meydan and she will take on the colts over a mile in the $1.5 million Al Rajhi Bank Saudi Derby. She may well find that her strongest opposition comes from within the Godolphin camp in  Rebel's Romance (Ire), another Dubawi 3-year-old but this one trained by Charlie Appleby.

“She's one of the best fillies I've had on the dirt,” said Bin Suroor this week of the Godolphin homebred Soft Whisper. “I've won the Guineas 12 times and she won it very well and is a top filly. It's a tough race to face the colts, but if the filly is good enough, she will run very well here and she can win.”

He added, “I also plan to run her in the UAE Derby after this.”

Appleby is equally positive in his view of the statuesque Rebel's Romance. He said, “Rebel's Romance has already had a run and has been here [in Dubai] all winter. He's very much learning on the job but you can't fault him. The penny is dropping at the right end of the race. He's three from three and had two starts on the synthetics at Kempton and Newcastle, then he came over here and put in a nice performance in the Guineas Trial. He learned plenty, getting the kickback and a feel of the surface as well as the style of dirt racing. He overcame the greenness through that and managed to win still, so that was very pleasing. He's definitely come forward again since then so, for me, he's a live contender in the Derby.”

Francis Graffard's Chantilly stable is represented by Homeryan (Fr) (Sea The Stars {Ire}), a winner at his local track at the end of January as well as finishing second in the G3 Prix Thomas Bryon on his final run of 2020.

John Gosden was second in the inaugural Saudi Derby with Mishriff (Ire), who runs in this year's Cup, and his Newmarket stable this time fields the gelding New Treasure (Ire), a Group 3 winner in Ireland last season for his breeder Jim Bolger.

Ted Voute, racing manager for New Treasure's owner Prince Faisal bin Khaled, said: “He was a rig when we bought him, with one testicle quite high which we felt was probably hurting him a little, so we gelded him and obviously hope that's made a bit of difference. He's quite a keen horse and his work on the track has been good so far. I'm hoping that being out of a Congaree mare he will like the dirt, and hope that the race will be run with a bit of speed, which might suit him.”