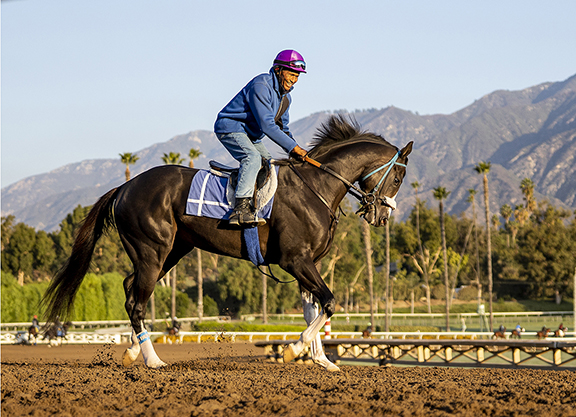 As Honor A. P. (Honor Code) was gearing up for his career debut at Del Mar last summer, owner Lee Searing had some fun with trainer John Shirreffs while inquiring about a potential rider for his stunning $850,000 Fasig-Tipton Saratoga yearling acquisition.

“I asked John, it wasn't like I didn't know, and said, 'Who are you going to be putting on this big horse,'” Searing said of the veteran conditioner widely known for playing his cards close to his vest.

Mike, of course, is Hall of Famer Mike Smith, the long-time, go-to rider for Shirreffs. The two most notably partnered on the legendary career of 2010 Horse of the Year Zenyatta (Street Cry {Ire}) as well as 2005 GI Kentucky Derby upsetter Giacomo (Holy Bull).

“Mike came up to me and said, 'This is quite a horse,'” Searing said. “We knew that we had something from the beginning.”

Honor A.P. first caught the eye as a 2-year-old rallying smartly from last of 10 and leveling off beautifully in the stretch to round out the exacta going six furlongs on debut at Del Mar Aug. 17. He was sent straight to the front by Smith and never looked back, running a field of nine off their feet to graduate in style when stretched to a two-turn mile at Santa Anita at second asking Oct. 13.

After missing some time with a foot bruise, Honor A.P. launched his sophomore season belatedly with a valiant second behind the unbeaten Bob Baffert-trained Authentic (Into Mischief) in the GII San Felipe S. Mar. 7. The blaze-faced dark bay began to wind up from fourth with a flashy move on the far turn and made a bold bid at Authentic as they straightened for home, but the pacesetter had plenty left in the tank and drew off to win by 2 1/4 lengths.

“Everybody says he's a lot like A.P. Indy,” Searing said of the grandson of the late leading sire and 1992 Horse of the Year. “He's a ridgling and he's got these great looks. I couldn't pass up naming him after a combination of his dad Honor Code and Lane's End foundation sire A.P. Indy. He puts his head down and looks like he could run all day. He does it so easy.”

A highly anticipated rematch is on the horizon with the aforementioned San Felipe winner in the rescheduled GI Santa Anita Derby, currently slated for June 6 pending final approval from the Los Angeles County Department of Public Health. Santa Anita last raced Mar. 22 due to the coronavirus outbreak.

Searing is well aware of the stiff competition out there on the GI Kentucky Derby trail, especially in his own backyard, after Baffert's sweep of last weekend's split-division GI Arkansas Derby at Oaklawn Park with unbeaten 'TDN Rising Stars' Charlatan (Speightstown) and Nadal (Blame).

“We're sitting here kind of like a single destroyer in the midst of the Baffert Army fleet,” Searing said with a laugh. “Baffert's got some great horses and he's a great trainer, but this horse just looks like he's ready to take on the challenge.”

Searing continued, “John is developing him like we've got a really good horse. He could go a distance of ground and his last race, trying to chase Authentic, wasn't the easiest thing to do. He made the perfect move–the one we all wanted to see–but he didn't catch him. He didn't lean on him and we're just really happy with the way he ran. We will be ready, God willing, for this race. We haven't set him down yet.”

Honor A.P. was the most expensive of 61 yearlings to switch hands from the first crop of promising young sire Honor Code. Bred in Kentucky by George Krikorian, he is out of the Shirreffs-trained two-time Grade I heroine Hollywood Story (Wild Rush).

Honor A.P.'s year-older half-sister by Giant's Causeway brought $875,000 from Searing at the 2017 Keeneland September Yearling sale. Now named Hollywood Girl, she was a promising debut winner on the Santa Anita lawn last June and is currently on the comeback trail after posting a pair of subsequent off-the-board finishes at Del Mar last summer.

“[Buying] Honor A.P. goes back to the year before when [bloodstock agent] David Ingordo called me–he knows George Krikorian really well–and said, 'Lee, there's this filly in the sale, she's absolutely gorgeous and we've got to buy her,'” Searing said. “We ended up buying her and she's a maiden winner now. But we backed off her and she's doing unbelievable.”

Searing continued, “So, when the next year came and we knew [Honor A.P.] was going into the sale, we knew we'd have to bid a lot of money–he's a beautiful horse, too. The exercise riders and grooms out here call him 'the chickmeister.' I was just really excited to buy him.”

“I've kind of stepped it up over the last three to four years,” the 72-year-old said of his stable. “I try to buy six to eight yearlings a year and I'm keeping some broodmares, too. We're going to end up racing and also selling some of the offspring. And it's all because of David Ingordo–he really does a great job. I'm trying to play the game at the highest level.”

Searing will be doing just that on the aforementioned, loaded Santa Anita Derby June 6 program at the Great Race Place also with GII San Pasqual S. and GIII Native Diver S. winner Midcourt (Midnight Lute) in the GI Gold Cup. The late-blooming and lightly raced 5-year-old gelding, a $450,000 KEESEP yearling buy, was third as the 3-5 favorite in the GI Santa Anita H. most recently Mar. 7.

“Midcourt is just a perfect example of somebody taking their time and patience to turn a horse completely around,” Searing said of the dark bay who sat out his entire 3-year-old season.

“John's such a great horsemen–my wife says he's as close to a horse whisperer as you can get. It's fun to watch a horse that didn't even want to run or train suddenly turn it all around.”

Searing is the CEO of Searing Industries, a California- and Wyoming-based, family-run business with more than 200 employees specializing in manufacturing steel-tubing products. He began attending the races with his father as an 8-year-old and it didn't take long for the family to make a splash into horse ownership.

“We bought our first horse when I was 12, and I owned my first horse–a $2,000 claimer at Caliente with my father–when I was 18,” Searing said. “His name was Secret Touch and his name carries on with a horse I own now.”

He continued, “I started my own business back in 1985 and we got out of racing for about 10 years while we started the company. The company has done really well and has allowed me to buy some really nice horses. When you go back 54 years and you look at all these horses you've owned–including having fun with a lot of cheap horses–I'm going to continue to enjoy horse racing over the years to come.”

Standouts to carry the purple and gold of C R K Stable–Searing's silks pay homage to the Los Angles Lakers and the gone-too-soon legendary all-star Kobe Bryant–are headed by MGISW Switch (Quiet American), who also hit the board three times in the GI Breeders' Cup Filly & Mare Sprint. The $150,000 KEESEP yearling earned more than $1.4 million on the racetrack and later brought $4.3 million from Moyglare Stud Farm at the 2012 Fasig-Tipton November sale.

“I just want to see my horses again more than anything,” Searing concluded. “I'm not the guy that says, 'It's the Derby or nothing.' I'm the guy that just loves horse racing.”