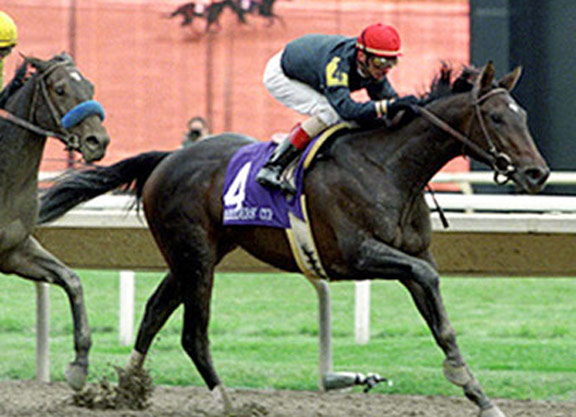 Just one day after the untimely death of their productive sire Arch (Kris S.), Claiborne Farm suffered another devastating when champion Storm Flag Flying (Storm Cat–My Flag, by Easy Goer) died Saturday at Rood and Riddle Equine Hospital due to complications from foaling. Veterinarians were able to save the 16-year-old’s Candy Ride (Arg) filly.

Winner of the 2004 GI Personal Ensign S. and GII Shuvee H., Storm Flag Flying also hit the board in four other Grade I events, including a runner-up effort behind Hall of Famer and dual Eclipse winner Ashado (Saint Ballado) in her final start in the 2004 GI Breeders’ Cup Distaff. She retired to Claiborne with a record of 14-7-3-3 and earnings of $1,951,828.

The dark bay is out of MGISW millionaire My Flag (Easy Goer), who is herself a daughter of champion Personal Ensign (Private Account). This is also the female family of GISWs Traditionally (Mr. Prospector), Miner’s Mark (Mr. Prospector) and Mr Speaker (Pulpit). She has produced five foals besides her Candy Ride filly, including an unraced 2-year-old colt name Strident (Street Cry {Ire}).

“Storm Flag Flying was a magnificent racemare from a magnificent family,” said Claiborne representative Bernie Sams. “We are saddened by the loss, but thankful our team was able to save her foal, a filly by Candy Ride.”

Storm Flag Flying will be buried at Claiborne Farm.