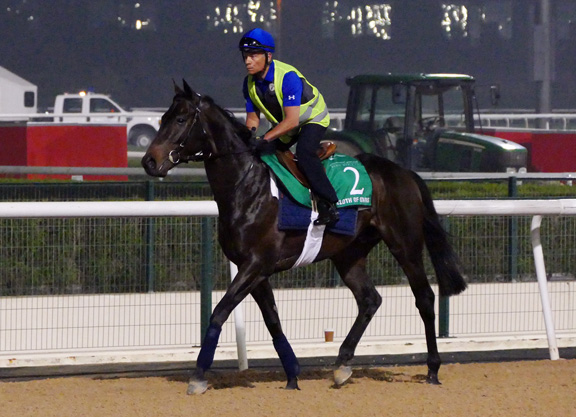 The exuberant Cloth Of Stars (Ire) (Sea The Stars {Ire}) may have drawn some unfavourable comments from morning track-work watchers but he remains at the head of the list to give Godolphin back-to-back wins in the G1 Dubai Sheema Classic. After finishing closer to Enable (GB) in the Arc than any other horse had done since the filly's emphatic Oaks victory, the 5-year-old had an early-season sharpener behind stablemate Talismanic (GB) over 9.5f at Chantilly on Mar. 6, which should have brought him on for this challenge.

The 4-year-old's compatriot Satono Crown (JPN) (Marju {Ire}), a brother to G1 Cheveley Park S. winner Lightening Pearl (Ire), has top-class form of his own in Japan and Hong Kong, most recently successful in the G1 Takarazuka Kinen, which was followed by a second to Kitasan Black (JPN) in the G1 Tenno Sho. Down the field in two subsequent starts, he previously won the G1 Hong Kong Vase of 2016, and he resumes his partnership with his jockey from that race, Joao Moreira.

At Sha Tin that day, Satono Crown had Highland Reel (Ire) half a length behind him in second and in the Sheema Classic he will meet that horse's younger brother Idaho (Ire) (Galileo {Ire}), one of seven runners on the card for Aidan O'Brien, who won this race in 2013 with St Nicholas Abbey (Ire). The G2 Hardwicke S. winner and G1 Irish Derby runner-up was 4½ lengths behind Rey De Oro when fifth on his most recent start in the Japan Cup in late November.

In a diverse field of ten featuring runners from Dubai, Britain, Ireland, France and Japan, Poet's Word (GB) (Poet's Voice {GB}) will bid to give Sir Michael Stoute a second win in the race after Fantastic Light's victory in 2000. The lightly-raced 5-year-old was runner-up in both the British and Irish Champion S. last season and is a consistent performer with a quietly improving profile that could make him a key player in major middle-distance contests this year. His most recent win came over a mile and a half in the G3 Glorious S. at Goodwood last August.

The sole filly in the line up is the Ippo Sameshima-trained Mozu Katchan (JPN) (Harbinger {GB}) who won the G1 Elizabeth II Cup in November after finishing runner-up to Soul Stirring (JPN) in the Japanese Oaks. She has drawn the rail.

“He quickened down the straight to win here last time and has come out of the race well,” said Appleby of Hawkbill.