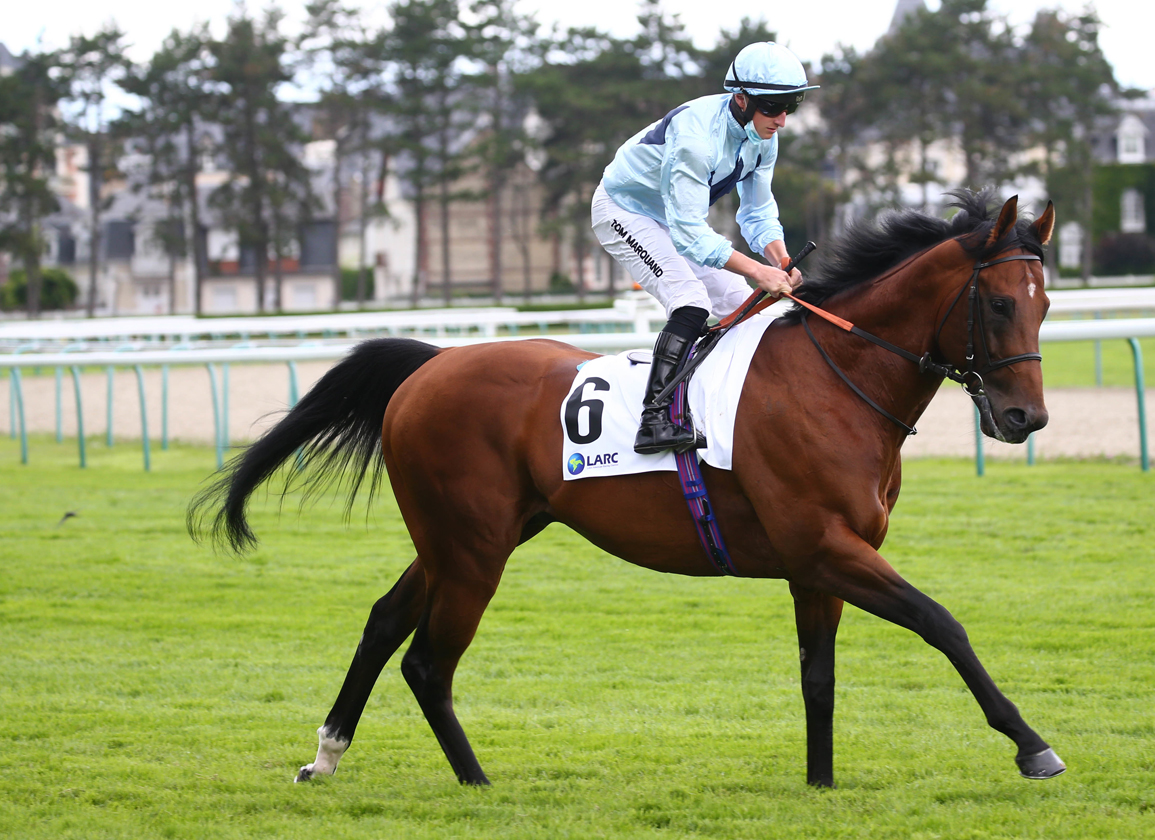 Only third behind Marianafoot (Fr) (Footstepsinthesand {GB}) on unsuitably soft ground in the 6 1/2-furlong G1 Prix Maurice de Gheest at Deauville Aug. 8, David Ward's homebred is back on his favoured fast surface over the six-furlong trip of his July 10 Newmarket victory.

Trainer Ed Walker is happy that the stars have aligned for the 4-year-old and said, “I am quite surprised to be here really. We always wanted to come to the Sprint Cup, but historically we thought it would be unlikely given the horse's preference for good ground. It's a real bonus to be going into the race with conditions likely to be in his favour. It was a career highlight when he won the July Cup. It was great that he was able to show what he can really do, as I've always believed he is a truly exceptional horse.”

“He still ran a massive race at Deauville and ran better than he did in the really heavy conditions at Ascot on Champions Day last year. It was proper stamina-sapping ground in France, it was drying quite quickly and it was tacky. He coped with it and was bang there at the six-furlong pole–I think with the extra half-furlong and the conditions his stamina was really tested. He has trained great since France and came out of the race well. We've just freshened him up. He is a big horse but doesn't take a huge amount of work. He goes there in great shape. I think he is the best horse in the race and if he is in the same form that he was at Newmarket, he will prove that.”

“We have been very pleased with Creative Force's preparation. We thought it was a very respectable first run at this level in the July Cup, when he learned plenty about sprinting and we are hoping that a more polished performer will be turning up here,” he said. “James Doyle felt that he rode like a sprinter in the Lennox S. He hit the lids that day, was up in the van the whole way and possibly did a bit too much early on, so the return to six furlongs should suit.”

Sheikh Mohammed Obaid Al Maktoum's Emaraaty Ana (GB) (Shamardal) has turned around his fortunes with a confidence-restoring win in a five-furlong conditions race at Hamilton at the end of last month and a second in the G1 Nunthorpe S. at that distance Aug. 20. He has the ground he likes here and is equally at home over six, but more importantly comes into this on a high. That is not the case for Jason Goddard's Supremacy (Ire) (Mehmas {Ire}), who needs to bounce back from two surprisingly tame efforts this term including a latest 15th in the July Cup. Successful in last year's G1 Middle Park S. and G2 Richmond S., it is disappointing that he has run so far below form in 2021 and would be a major threat if able to regain his momentum.

2-Year-Olds on Display at Haydock

Haydock's card begins with the Listed Betfair Exchange Ascendant S. for 2-year-olds over a mile, where Godolphin are represented by the 2.1million gns Book 1 graduate Hafit (Ire) (Dubawi {Ire}). He beat two subsequent winners including the TDN Rising Star Razzle Dazzle (GB) (Muhaarar {GB}) on his debut over seven furlongs at Newmarket Aug. 6 and could be anything, but lying in wait is Dr. Ali Ridha's Aug. 20 Listed Stonehenge S. runner-up Power of Beauty (Ire) (Slade Power {Ire}). Hafit's trainer Charlie Appleby has a line to that Hugo Palmer-trained colt through the Stonehenge winner Albahr (GB) (Dubawi {Ire}), while Sheikh Mohammed Obaid Al Maktoum's 9 1/2-length course-and-distance novice scorer Triple Time (Ire) (Frankel {GB}) is another of the quartet with abundant promise.

At Kempton, the feature is the G3 Unibet September S. over a mile and a half, where Shadwell's July 10 G3 Silver Cup and Aug. 14 G3 Geoffrey Freer S. winner Hukum (Ire) (Sea the Stars {Ire}) looks to continue his sequence under a three-pound penalty.

“This looks another nice opportunity for him, all being well, and he won around Kempton as a 2-year-old,” trainer Owen Burrows said of the 4-year-old, who missed the G2 Grand Prix de Deauville due to a dirty scope. “He has got the penalty again, but he had that at Newbury and we go there very hopeful. He did a little bit of work on Wednesday and we were very happy with him and there were no signs that he should not be running.”

Also on the card is the six-furlong G3 Sirenia S. for the juveniles, with Kevin Phillipart De Foy pitching in Bernard Havern's July 7 course-and-distance novice winner Scot's Grace (Ire) (Mehmas {Ire}). “I've been a bit unlucky, as she needs fast ground,” he explained. “She has had a couple of entries over the summer, but the ground has turned against her. She handled the track there first time out, so we thought this was worth taking a punt and see how she gets on in the race. I never put my fillies under too much pressure at home and we will learn a lot more on Saturday. She has improved a bit, but she will need to on Saturday.”

Hugo Palmer is represented by David Howden and Qatar Racing's Hierarchy (Ire) (Mehmas {Ire}), who has registered wins in novices over this trip at Wolverhampton Aug. 9 and at Salisbury Aug. 24. “His heart is in the right place and he seems to be improving as a 2-year-old,” he said. “He is showing the general public what he can do in the afternoon opposed to showing it in the morning, as he definitely saves his best for racing. He handles the surface, has a nice draw and has got the momentum behind him. He is very much a 2-year-old and though I'm not saying he will not make it at three, he would need to grow and develop.”

A Sextet for the Moulin

“Hopefully this race will show her in a better light–I think she could have been closer at Goodwood,” he said. “It's a very good race and we'll find out where we stand. We can always go back to fillies-only company in the Sun Chariot after this. Baaeed has looked very good and I'm sure he'll take a lot of beating. He travels very well in his races and in some of his races he's looked unbeatable. I'm sure it will be a good race and I'm looking forward to it–we have nothing to lose.”