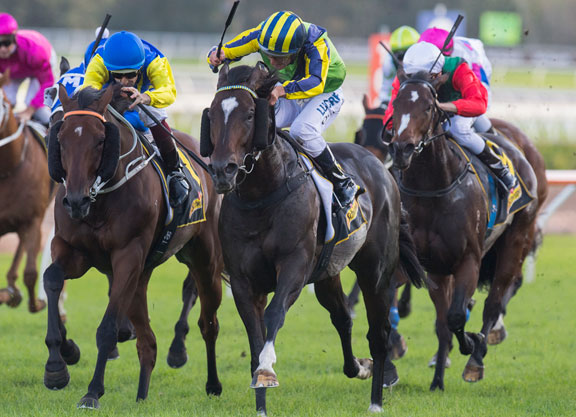 Jockey Damien Oliver bridged a twelve moth gap since his last Group 1 victory when he steered the Mike Moroney trained Tivaci (Aus) (High Chaparral {Ire}) to a last to first win in the G1 Schweppes All Aged S. at Randwick on Saturday. The 4-year-old appeared to have a lot to overcome given his wide draw and his preference for coming from behind, on a day when racing prominently near the rail was seemingly a big advantage. Oliver and Moroney had formulated a plan however and they stuck to their guns with the jockey content to have the whole field in front of him at halfway. At that stage Jungle Edge (Aus) (Dubawi {Ire}) was at the head of affairs but was being stalked all the while by Le Romain (Aus) (Hard Spun) with the favourite English (Aus) (Encosta De Lago {Aus) just tucked in behind this pair. As they straightened up Le Romain made his play for victory as English moved menacingly, looking set to atone for her previous run when nailed by Chautauqua (Aus) (Encosta De Lago {Aus}) in the T.J Smith S. However her challenge soon petered out as Le Romain dug deep in front but Tivaci had hit top gear and was finishing with a flourish down the centre of the track. It was only in the last 50m that Tivaci got to the front but he won going away to deny Le Romain a fourth Group 1 by a neck with Jungle Edge sticking on gamely a length and a quarter back in third. “It was a great effort, he defied the pattern today,” said Damien Oliver. “I was a little concerned. Mike and I discussed tactics before the race but we thought we'd done so much work to get him to settle, I was reluctant to change his pattern because if he does go too free early he doesn't finish off as good. I had to take some medicine early and he rewarded us late in the race.” Despite having ridden over 100 Group 1 winners Oliver has not been inundated with top level rides in recent months. “It has been difficult lately, there are a lot of good jockeys around. I am getting in to the twilight of my career now, you expect the next generation coming through, just shows if you have the horse, you can still match it with them in the big races,” he added.

Tivaci certainly wasn't winning an elite event out of turn. He required the intervention of stewards to make his stakes breakthrough when awarded the G3 C.S. Hayes S. at Flemington at the expense of first past the post Palentino (Aus) (Teofilo {Ire}) in Feb. 2016. Since then he has plied his trade with distinction adding a Group 3 at Sunshine Coast last July and the Listed Kensington S. over five furlongs at Flemington Jan. 28 when beating Winx's half-brother El Divino (Aus) (Snitzel {Aus}). He has also shown a Group 1 could be within reach when third in the G1 Toorak H. at Caulfield last October and also when occupying the same slot in the G1 Cantala S. at Flemington behind Le Romain later that month. While his penultimate fourth in the G1 T.J Smith S. also suggested he was a player at the top level. “I was really confident with him during the week,” said Mike Moroney after the race. “I stayed back to watch him gallop on Wednesday on the course proper and he galloped terrific. He just was glowing here today and very relaxed for him too. I said to Ollie he was as relaxed as I've seen him.” A stallion career now beckons for Tivaci with his immediate racing future still up in the air. “He's been placed in a lot of Group 1s so deserved to get one here today and it's very timely as he's going to stud at Waikato Stud,” Moroney explained. “We'll have a meeting now as to whether we race on or whether he goes now. He's the fastest son of High Chaparral probably in the world, I would think. He's by a great sire and proving to be a sire of sires too so he's going to a great home.

Tivaci, a A$250,000 yearling, is the first of three foals from the winning Fastnet Rock (Aus) mare Breccia (NZ). He was followed in 2014 by a colt by Dalakhani (Ire) and a colt by Dundeel (NZ) in 2015. His grandam Luna Tudor (Aus) (Military Plume {NZ}) was a fine race-mare winning the G2 Perth Cup but she eclipsed that achievement as a broodmare, producing G1 Toorak H. winner Allez Wonder(Aus) (Redoute's Choice {Aus}) and GSW Pretty Pins (NZ) (Pins {NZ}).