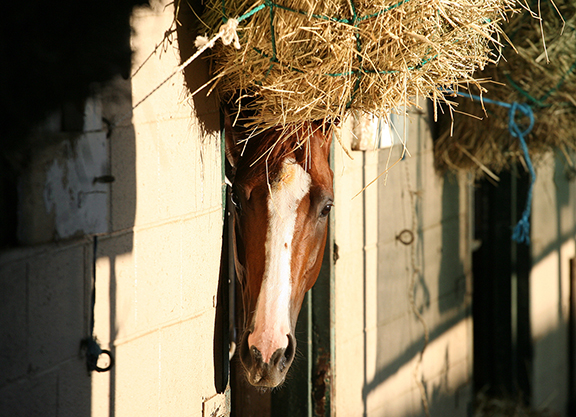 Facing a reported $2-million budget deficit, the Southern California Stabling & Vanning Racing Committee has performed a fiscal juggling act to maintain the stabling status-quo in the southern portion of the state during 2021, with year-round auxiliary stabling assured for the year at Los Alamitos and San Luis Rey Downs, while off-site training will continue at Santa Anita during the Los Alamitos Thoroughbred and Del Mar Fall meets.

Last year, the program–funded in equal parts by the Thoroughbred Owners of California (TOC) purse account and the Southern California racetracks–cost approximately $9.4 million, the committee explained in a letter addressed to the trainers Thursday.

Historically, monies have come from a percentage of bricks and mortar simulcast wagering at tracks and satellites. But due to the economic impacts of COVID-19, that revenue stream was largely decimated last year.

What's more, with state-wide purses off more than $20 million since 2018 due largely to a massive betting shift towards ADW platforms, “the horsemen's purse account is not in a position to continue to subsidize millions of dollars per year” towards the program, the letter states. This at a time when “inefficient training” is not “filling fields,” the letter adds.

According to the letter, the following three main actions were taken to keep the program afloat:

-The auxiliary stabling facilities agreed to cut their stabling rates by more than $1 million and to carry the $2 million of debt from 2020.

-Both the TOC and the SoCal racetracks have each agreed to fund an additional $2 million–above the statutory funding–to help cover the projected deficit this year. These funds will come from the TOC purse account and racetrack commissions respectively.

Had these measures not been taken, either Los Alamitos or San Luis Rey Downs could have faced closure this year, and possibly both, the letter warns.

According to the letter, another possible ramification could have been the imposition at Los Alamitos or San Luis Rey Downs of a new per-day “stall rent” charge, potentially “rebate-able” based on a minimum number of per-trainer starts per stall–an idea that TOC president and CEO Greg Avioli mooted in October.

The letter also addresses several barometers of the overall fiscal performance of the state's industry:

-Due to a shrinking horse inventory, for much of 2020 both Los Alamitos and San Luis Rey Downs operated at less than 50% of horse capacity–850 at the former and 450 at the latter.

-The racing participation of horses stabled at both Los Alamitos and San Luis Rey Downs was “remarkably low”–0.6 starts per horse during this past year's Santa Anita winter-spring meet.

-As a consequence, between December 2019 and June 2020 the 749 horses that the stabling and vanning program spent some $4 million to stable and train at Los Alamitos and San Luis Rey generated 486 starts during Santa Anita's six-month winter-spring meet. This translates into more than $8,000 per starter.

-Workers compensation costs have increased dramatically. Since the beginning of 2019, owners' per-start contributions have risen more than 60% from $100 per start to $162 per start. At the same time, trainers' per-stall fees have risen from $3.05 to $5.10.

-More than 90% of workers compensation claims result from morning training.

The letter also makes clear that this financial arrangement is a temporary one.

“The purpose of this letter is to inform the CTT and ALL California trainers of the state of the stabling and vanning fund. The negotiated deal outlined above to keep the SoCal auxiliary training program essentially the same in 2021 as it was in 2020 is only a stopgap measure,” the letter states. “The current economics of SoCal Stabling & Vanning are not sustainable long term.”