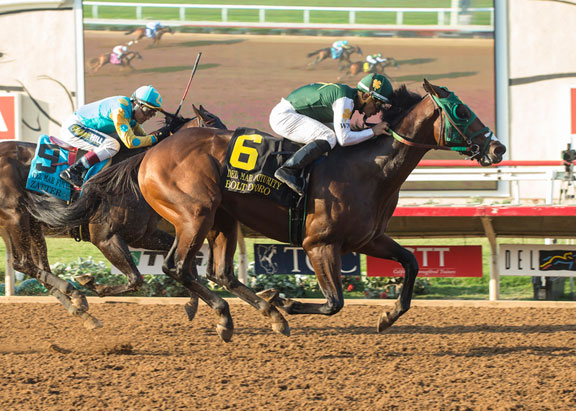 The beautifully bred Bolt d'Oro (Medaglia d'Oro-Globe Trot, by A.P. Indy) proved to be one of the most exciting 2-year-olds of his generation by virtue of a pair of dazzling scores in the GI Del Mar Futurity and GI FrontRunner S.–a pair of efforts that immediately verified the colt as a top-notch stallion prospect. Adding a hard-fought victory in the GII San Felipe S. and a runner-up finish behind eventual Triple Crown hero Justify (Scat Daddy) in the GI Santa Anita Derby at three, Bolt d'Oro is set to stand his first year at Spendthrift Farm in 2019 for a fee of $25,000. The TDN's Lucas Marquardt sat down with Mark Toothaker of Spendthrift to discuss his outlook for 'Bolt,' who is one of four new Grade I winners standing at the farm in the new year.

TDN: Bolt d'Oro clearly became a highly coveted stallion prospect early in his career. Can you talk a little about the process that led to him arriving at Spendthrift?

MT: It was extremely competitive to try to land that horse. It was just absolutely crazy with all the other farms trying to compete for him. It was very nerve-wracking, the whole process, until finally [owner/trainer] Mick [Ruis] signed our offer and accepted it at our Spendthrift Breeders party. That was the first good night's sleep I had in about two weeks…In the end it was just so gratifying to be able to land that horse here at Spendthrift.

TDN: What were your initial impressions of Bolt d'Oro as a 2-year-old? It seems like from the outset of his career, he started doing things you might not expect from a son of Medaglia d'Oro out of an A.P. Indy mare.

MT: He was a big, stretchy, two-turn-looking horse. To show the speed that he showed and the ability that he had, it was very unique. He was just a horse that was a dream horse for us to be able to get. He just did things that you wouldn't have expected, like you said. Had a great turn of foot and a high cruising speed. So with that great Claiborne pedigree, and WinStar having bred the horse, we just felt like if you could get this horse here to Spendthrift, you could just imagine what the possibilities would be…We jumped just as soon as the Del Mar Futurity was over. We went ahead and made our move and thought, 'If we're going to have any chance at this horse, this is when we need to get involved.' The FrontRunner, that was one of the most impressive races. That was one of those races that just makes the hair on the back of your neck stand up. He just absolutely demolished that field.

TDN: Medaglia d'Oro is already a proven, top sire, and now he is showing himself to be a sire of sires. How much of a boost did that give a horse like Bolt d'Oro?

MT: Oh, it did. Violence has had some high class runners. He's had some excitement about him. I think that gives breeders confidence that a son of Medaglia d'Oro is out there getting it done at a high level. With Bolt's pedigree–anytime you can get a Claiborne female family like that by such a sire as Medaglia d'Oro, that excites breeders very much. It's been a lot of fun. We've had a lot of very good mares coming Bolt's way.

TDN: How many mares do you think you will ultimately get to him?

MT: We have just been overrun with applications on this horse. We had talked about trying to be somewhere around 180 on his book–190 is where it's going to be. We've sold 189 seasons between what we're doing and what Mick's done. There's going to be one in the TCA Auction that's also going to be available to round that out. We have literally gotten another 50 or 60 applications for folks looking for spots on the horse…WinStar is going to send mares–I believe they're breeding seven mares to Bolt. Ashford is going to breed 10 mares to Bolt.

TDN: With the support he's received, you probably could have been more aggressive with his stud fee. What was your thought process in setting the stud fee?

MT: We felt like $25,000 was a very fair number for him. It has been a market where people like to jump on the first-year horses, and then business wanes a little bit in years two, three and four. We felt like at that price we'll be able to sustain his book, especially with all the excitement that we had for him this year and folks getting shut out.