Spendthrift To Stand Rock Your World 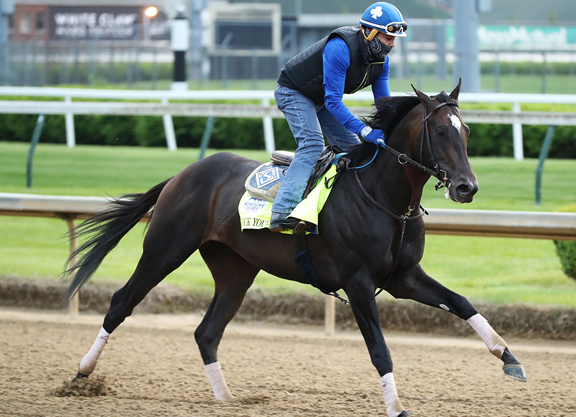 Bred by trainer Ron McAnally and his wife Deborah, Rock Your World was a $650,000 purchase by Sapphire Stable at the 2019 Keeneland September sale before joining the Southern California barn of trainer John Sadler. A debut winner sprinting six furlongs on turf at Santa Anita on New Year's Day, the dark bay rallied to a 2 1/4-length success in the Feb. 27 Pasadena S. Possessed of an each-way pedigree, Rock Your World was given a chance to show what he could do on the dirt in the GI Santa Anita Derby, and he set a strong pace en route to a 4 1/4-length defeat of Medina Spirit (Protonico) before galloping out strongly.

“We are really excited about Rock Your World and thankful to the Hronis family, Michael Talla, and John Sadler for allowing us to be a part of the horse's promising future,” said Spendthrift General Manager Ned Toffey. “Rock Your World has a wonderful combination of sheer talent, pedigree and sire power, and he's an imposing physical specimen which you would expect from a $650,000 yearling. We were especially taken by the brilliance he displayed in the Santa Anita Derby in his first start on the dirt, and think he has a great shot to show that again in the Kentucky Derby and beyond.”

A full-brother to GSP She's Our Charm, Rock Your World is out of Charm the Maker, a two-time black-type winner who was second in the GI Hollywood Starlet S. and third in the GI Oak Leaf S. as a juvenile. Rock Your World's Grade III-winning second dam Charm the Giant (Ire) (Giant's Causeway) is herself the dam of GSW Liam the Charmer (Smart Strike) and is a daughter of MGSW & GISP Olympic Charmer (Olympio). The last-mentioned is also the dam of MGSP and stakes-producing Charming Legacy (Ire) (Danehill).

“We are excited about of our relationship with Spendthrift Farm on such a special horse like Rock Your World,” said Kosta Hronis of Hronis Racing. “It is hard to argue with the success they've had when it comes to standing premier stallions, and we are hopeful we can accomplish a lot with this colt before we retire him to stud.”

Added Michael Talla: “We are thrilled to have a horse like this. Hopefully, Rock Your World will be the son to carry on the Candy Ride sire line, and I can't think of a better place than Spendthrift for him to get the opportunity to do that.”