Speightstown's Sharing Kicks Off 2020 on a Winning Note 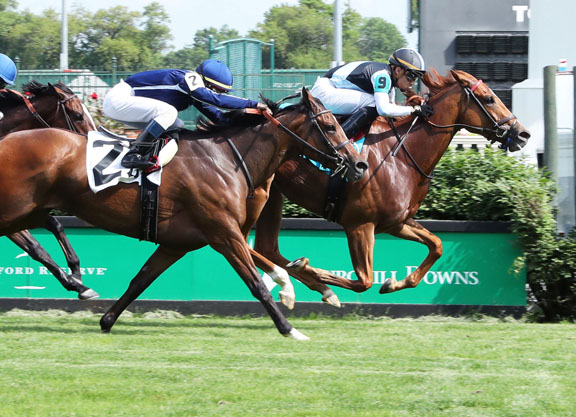 Sharing picked up her sophomore season where she left off last term with a victory in the Tepin S. at Churchill Downs. Tracking from fourth through a :24.16 opening quarter and a :48.39 half, Maryland bred swept up two wide on the backstretch, took control in early stretch and held off a late bid from Abscond to win by 3/4 of a length. Pass the Plate rounded out the trifecta.

A close-up third in her career bow at Saratoga last July, the chestnut earned TDN Rising Star honors with an emphatic win in an off-turf test up state in August. Victorious in Laurel's Selima S. a month later, she was overlooked at 13-1 in the GI Breeders' Cup Juvenile Fillies Turf S. at Santa Anita Nov. 1, but once again proved best, scoring by 1 1/4 lengths.

“It's great seeing her back to her form from last year,” winning rider Manny Franco said. “She's very classy but it makes your job easier when you have nice horses underneath you.”

Millionaire Shared Account recorded her most important career victory in the 2010 GI Breeders' Cup Filly & Mare Turf. In addition to Sharing, the half-sister to GSW Colonial Flag (Pleasant Tap) has produced stakes winning Riley's Choice (Distorted Humor). Sold for $550,000 at KEENOV in 2018 while carrying a filly by Mastery, she was bred back to Medaglia d'Oro this term.