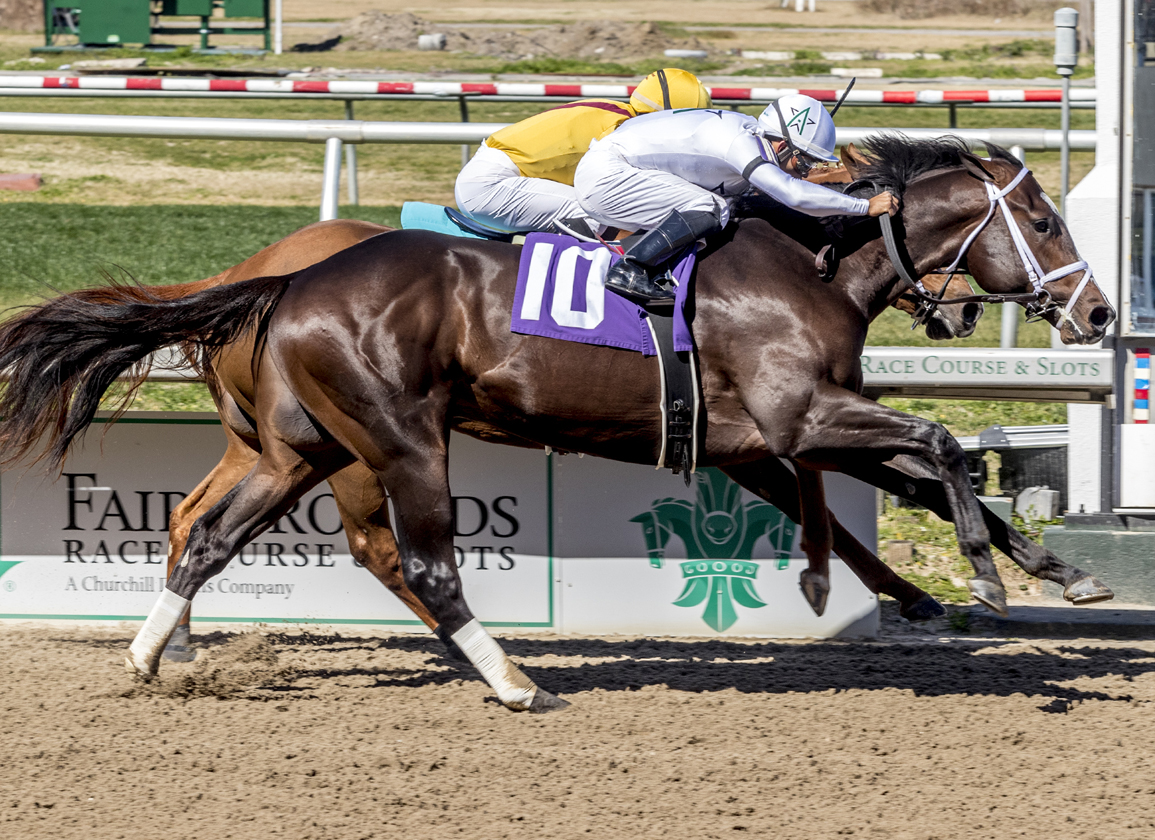 4th-Fair Grounds, $55,000, Msw, 2-19, 3yo, 6f, 1:09.58, ft, head.
MOMENTOUS (c, 3, Speightstown–Glory and Power, by Medaglia d'Oro) amassed a solid worktab at this conditioner's South Florida base at Palm Beach Downs and was sent off at just shy of 5-1, the third pick behind fellow firster and 7-5 pick Marsalis (Curlin x Hot Dixie Chick). Momentous was first to break the line from gate 10, but the favorite–a homebred half-brother to recent GIII Houston Ladies' Classic heroine Pauline's Pearl (Tapit)–was driven through by Joel Rosario to take up the running inside the opening furlong and took the field past the half-mile marker in :22.29 seconds. Momentous confronted Marsalis in earnest at the five-sixteenths and led narrowly while racing on his incorrect lead passing the eighth pole. Marsalis was in for the fight and boxed on gamely inside, but Momentous did slightly the better work and proved best by a head while remaining on his right leg under the line. The top two had some 5 1/4 lengths on Major Contender (Distorted Humor) in third. The winner is out of a full-sister to SW Dance d'Oro and hails from the deeper female family of Horses of the Year Saint Liam (Saint Ballado) and Gun Runner (Candy Ride {Arg}), as well as GISW Funtastic (More Than Ready). Momentous is bred on the highly productive cross that has been responsible for the likes of the late GISW Rock Fall, GISW Competitionofideas and additional GSWs Souper Stonehenge, Strike Power and Saturday's GIII Mineshaft S. hero Olympiad. Glory and Power is also represented by a 2-year-old Tapit colt that sold for $400,000 at KEESEP last fall and a yearling colt by Street Sense. The mare is due to Good Magic this season. Lifetime Record: 1-1-0-0, $33,000. Click for the Equibase.com chart or VIDEO, sponsored by TVG.
O-WinStar Farm LLC, Bonne Chance Farm LLC & Siena Farm LLC; B-Bonne Chance Farm LLC (KY); T-Todd A Pletcher.