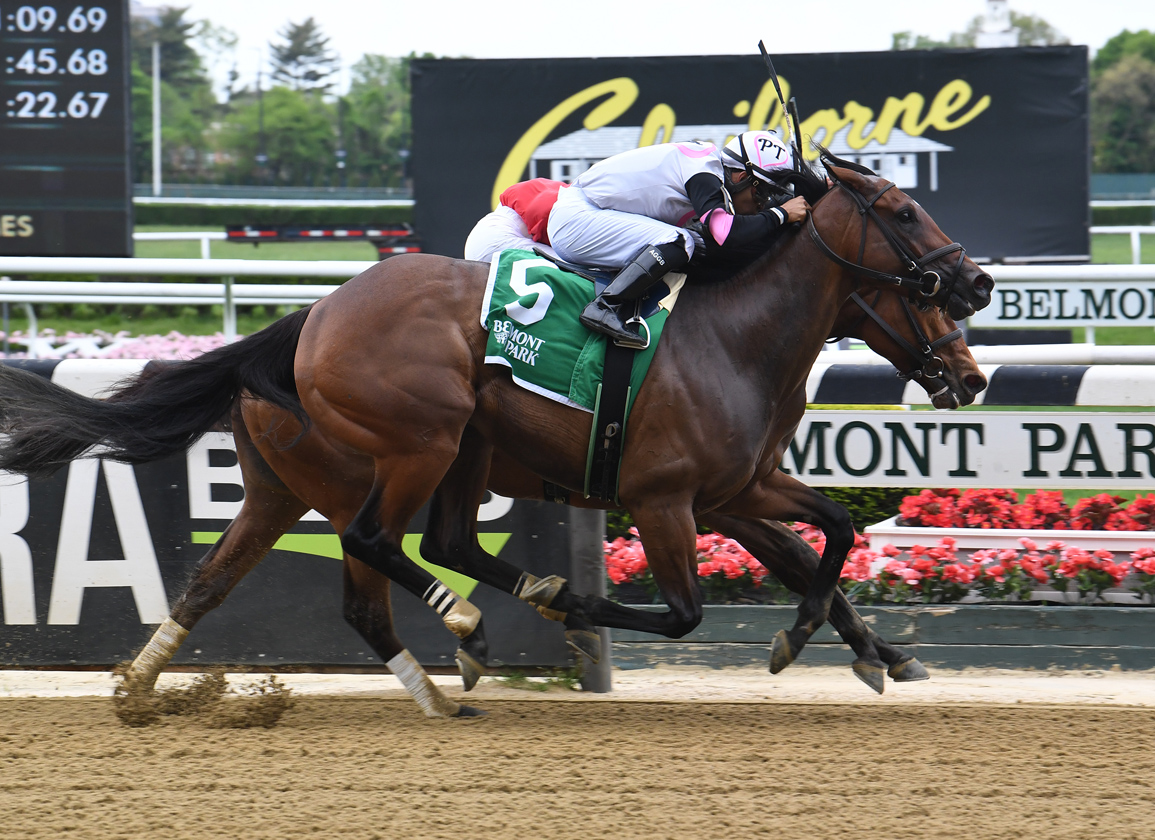 Brilliant last year as a sophomore, Bella Sofia returned a popular winner at Belmont Saturday, but only after hard-knocking MGSW Frank's Rockette tested her for the length of the stretch.

Away cleanly from her outside draw, Bella Sofia pressed in a well-held second through splits of :22.67 and :45.68 with Frank's Rockette drafting from the pocket. Bella Sofia took over at the top of the lane, but Frank's Rockette split horses and immediately came to tackle the favorite. The pair traded jabs from there, with Bella Sofia finding slightly more than her more seasoned foe when it mattered.

“I knew I had it,” said winning rider Luis Saez. “She was coming off the layoff and I didn't want to take too much from her. We knew she's a Grade I winner and a great filly. She did what she was supposed to do. I was a little worried about the layoff, but she proved that she can come back and she's tough.

A double-digit debut winner here some 53 weeks ago, Bella Sofia settled for second in the Jersey Girl S. a month later before dominating future MGSW Glass Ceiling (Constitution) in a first-level allowance in July. She crushed by 4 1/2 lengths in Saratoga's GI Test S. Aug. 7, prompting Medallion Racing and Parkland Thoroughbreds to buy in before Bella Sofia added the GII Gallant Bloom H. over track and trip Sept. 26. She had been off since finishing fourth in the GI Breeders' Cup F/M Sprint Nov. 6, but had been showing off her speed in the mornings of late.

“She's a very gutsy filly,” winning conditioner Rudy Rodriguez said. “She's been doing very good in the morning. She's been galloping out seven-eighths to a mile the two times she worked before her last work, so I knew she was fit. She's a special filly. It's good when they dig in like that.”

As for what might be in the cards going forward, co-owner Vincent Scuderi said, “I was a little worried about the break between three and four if she'd come back okay, but Rudy said she's back on her game, she put weight back on. We now have to make a campaign, so hopefully we'll be able to run in the [Aug. 28 GI Ballerina [S. at Saratoga]. The Breeders' Cup is the ultimate goal… We were going to go in the [June 10] GII Bed O' Roses, but Rudy said she was ready so we ran her now. We want to space her out and we have big goals for her going forward.”

Pedigree Notes:
The only 2-year-old by her now Chilean-based sire to sell in 2020 when she fetched $20,000, the :10 2/5 OBSJUN breezer is the stakes-winning full-brother to Classic winner Oxbow (Awesome Again)'s lone Northern Hemisphere graded winner (to go with two Chilean Group winners, including one at the highest level).

Bella Sofia is one of four graded winners out of mares by the Storm Cat stallion Consolidator. Her dam was just a $3,000 yearling who was claimed for $25,000 ahead of a pair of stakes placings. Love Contract RNA'd for $4,000 at the 2019 Keeneland January sale. Her last reported produce is a 2-year-old colt named War Empire (V. E. Day).