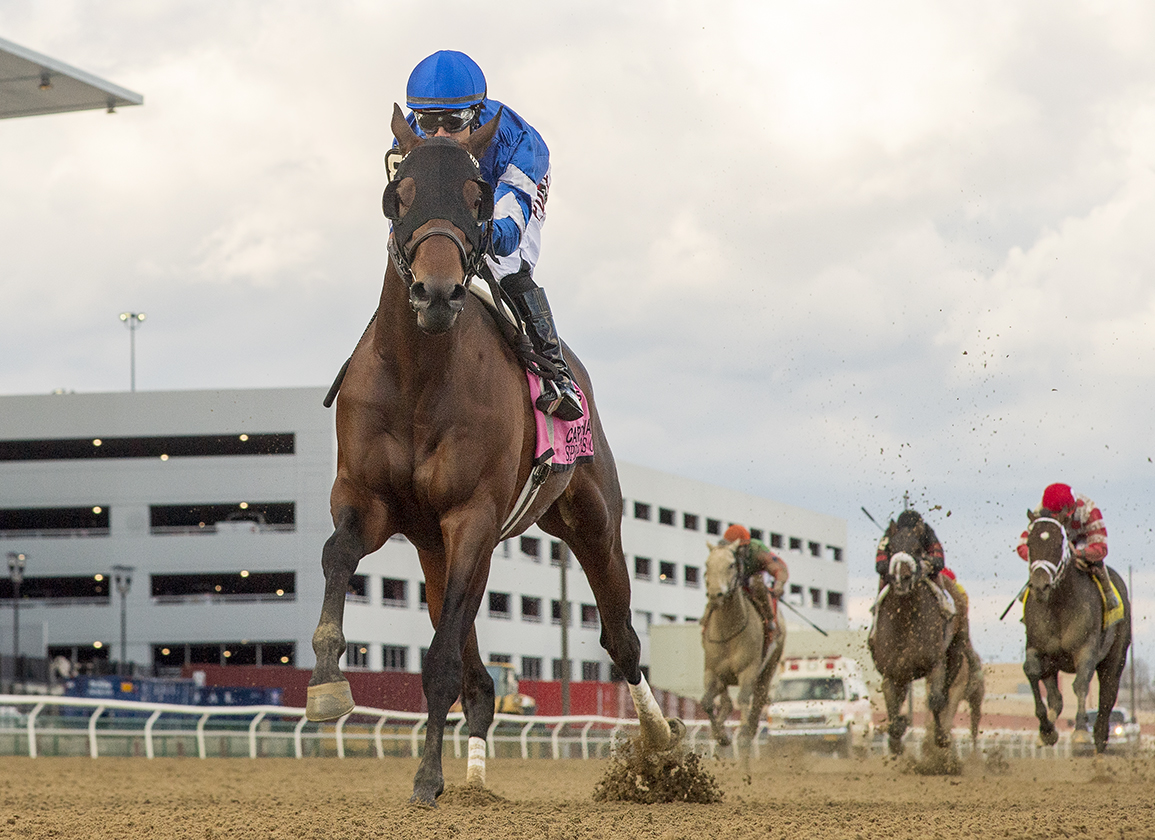 Speaker's Corner (Street Sense) took his 2022 record to a perfect three-for-three with a sensational victory in the GI Carter H. on a picture-perfect Saturday afternoon at Aqueduct.

Hammered down to 3-5 favoritism, the Godolphin homebred was quickest away from the outside stall, but was quickly joined on the front end by a trio of rivals to his inside. Speaker's Corner spurted away to gain a clear lead after the first quarter went up in :23.17 with Reinvestment Risk (Upstart) tracking from second to his inside.

That foe backed up a bit as Speaker's Corner registered a :46.11 half-mile and Green Light Go (Hard Spun) ranged up to present a new challenge on the outside. That threat was quite brief however as Speaker's Corner shrugged off his competitors with ease at the top of the stretch, cruising home with ease under a hand ride from Junior Alvarado to win for fun. It was 4 1/2 lengths back to Reinvestment Risk in second and GISW Mind Control (Stay Thirsty) was third.

“We thought he was talented as a 2-year-old,” said winning trainer Bill Mott. “He had some little issues that we had to give him time for and then we had to give him more time than what we wanted to, but right now it looks like it's turned out well. That was a prime target [winning a Grade I]. That was the goal.”

On targeting the GI Met Mile June 11, “We've got to put that on the list of things. That would be a prime target. We've squeezed him pretty good the way it is. We've come back five weeks, four weeks, so he's had his races fairly close together already.”

“He is a horse who we have always been very high on,” Alvarado said “We figured out what he wants to do. He's a very good miler. Today, we had a great trip, and he was there the whole way around. He was very much the best horse. He took the lead around the half-mile pole and after that, he was just doing his thing. He ran them off their feet early. He was travelling comfortably and was faster than the other horses. He gave me the same kick at seven-eighths as a mile. He's on his 'A' game right now. He'll be a tough horse this year.”

Breaking his maiden at second asking in October of 2020, Speaker's Corner was not seen again until August of 2021 when he romped in a Saratoga allowance. Off the board next out when extended to nine panels for the GI Pennsylvania Derby, he rebounded with a 6 3/4-length optional claimer victory going a sixteenth shorter at Belmont in October, good for a 109 Beyer Speed Figure. Setting the pace in Aqueduct's Discover S. Nov. 27, the homebred set the early pace, but was run down late, finishing second. Speaker's Corner kicked off this term with a front-running score in Gulfstream's one-mile GIII Fred Hooper S. Jan. 29 and led every step of the way for a decisive victory in the GII Gulfstream Park Mile last out Mar. 5.

Speaker's Corner has Godolphin pedigree top and bottom being by their stallion Street Sense and out of a daughter of their late Bernardini. He makes 12 Grade I winners for Street Sense and is also one of 37 graded winners and 85 black-type scorers for the Darley sire. Speaker's Corner is the 14th Grade I winner for Bernardini as a broodmare sire and one of 36 graded victors and 65 black-type achievers out of his daughters. The Street Sense/Bernardini cross has been successful for Godolphin in the past as it is the same breeding as their MGISW and new sire Maxfield.

Godolphin purchased the winner's second dam, MGISW Round Pond (Awesome Again), for $5.75 million at the 2007 FTKNOV sale. Speaker's Corner is the first foal out of her unraced daughter Tyburn Brook, who has since produced the 3-year-old colt Town Branch (Street Sense), a juvenile colt by Maclean's Music and a yearling colt by Nyquist. She was not bred back for 2022 after having that May 9 foal. Round Pond is also the dam of G1SW Long River (A.P. Indy) and GSP Lake Lucerne (Dubawi {Ire}).