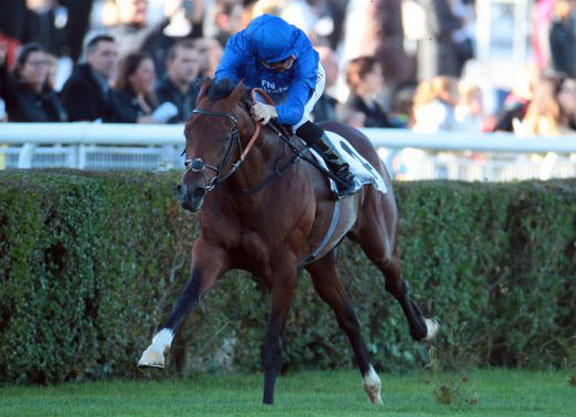 This looks a particularly strong renewal of the G2 UAE Derby with a couple of genuine Group 1 performers set to take part among a field of 16. One who has already scored at the top level is Thunder Snow (Ire) (Helmet {Aus}) who was a first Group 1 winner for his sire when he handed out a five length beating to South Seas (Ire) (Lope De Vega {Ire}) in the G1 Criterium International at Saint-Cloud last October. The Godolphin colt, who has been recently nominated for the American Triple Crown, showed he had not only trained on into a very smart 3-year-old but also a versatile one when he won on his seasonal reappearance in the G3 UAE 2000 Guineas on dirt at Meydan Feb. 11. That was over a mile and while his sire doesn’t scream this 1900m trip will suit, his dam Eastern Joy (GB) (Dubai Destination) offers plenty of encouragement on that score. There were a number of today’s contenders behind Thunder Snow last time including Qatar Man (Ire) (Archarcharch) and the Doug Watson trained pair of Cosmo Charlie (Stay Thirsty) and Bee Jersey (Jersey Town). Bee Jersey got closest to Thunder Snow on that occasion albeit beaten five lengths while the other two clashed again in the Listed Al Bastikaya Mar. 4 when Cosmo Charlie made all the running to beat Qatar Man by a length. Lucie Botti, whose husband Marco trains the Mubarak Al Naemi owned Qatar Man, is expecting further progress from their representative and commented, “He didn’t have a great prep going into his last start in the Al Bastakiya and he has improved for that run, which he obviously needs to do. He handles the dirt, has a good cruising speed and if he gets a similar trip to the Al Bastakiya then I think he can be competitive.”

Aidan O’Brien sends over a strong team for World Cup night this year and he has an interesting runner in Lancaster Bomber (War Front). Used as a pacemaker for his stable-mate Churchill (Ire) (Galileo {Ire}) on a number of occasions last year, he posted a sound effort to finish runner up to 2016’s Champion juvenile in the G1 Dubai Dewhurst S. at Newmarket in October. He showed what he was capable of when utilising more conventional tactics in the GI Breeders’ Cup Juvenile Turf at Santa Anita in November when he ran a fine race to finish second to Oscar Performance (Kitten’s Joy). However it will be his first competitive taste of a dirt surface and the trip may also stretch him. This race was won by the Japanese trained Lani (Tapit) last year and trainer Kiyoshi Hagiwara sends over Epicharis (Jpn) (Gold Allure {Jpn}) who arguably boasts stronger credentials than his compatriot last year. He is unbeaten in four starts, proven over the surface and the trip and he should again prove superior to the other Japanese runner Adirato (Jpn) (Rulership {Jpn}).