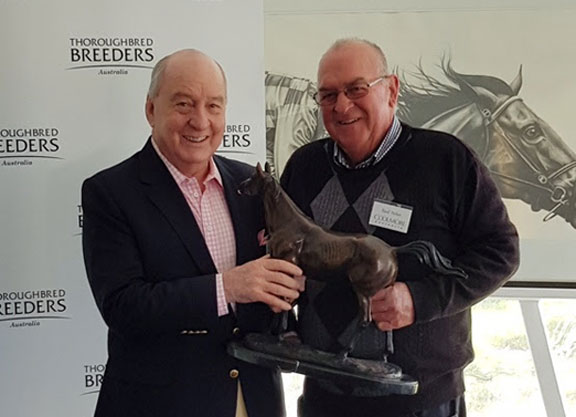 Arrowfield Stud stallion Snitzel (Aus) (Redoute's Choice {Aus}) was the star of the show at Thoroughbred Breeders Australia's (TBA) annual awards ceremony which took place on Sunday in conjunction with Coolmore Australia's stallion parade. The 15-year-old stallion scooped two of the five awards including the headliner, the Champion Australian sire with his progeny earning over A$16m in prize-money last season. Snitzel was also crowned the leading sire of 2-year-olds having been responsible for 8 individual juvenile stakes winners and earnings of just under A$5m. Accepting the award on behalf of Arrowfield Stud, Alan Jones commented, “It's been a wonderful year for Arrowfield and I'd like to thank the whole team there who have done a wonderful job, as they do in all studs. It's been a remarkable year for Snitzel, he equalled Danehill's record for the most stakes-winners in a season which is quite extraordinary, so we are very honoured, very privileged and very thankful.”

The title of leading first season sire went to Coolmore Stud's Pierro (Aus) (Lonhro {Aus}) who sired seven individual 2-year-old winners headed by his Group 3 winning daughter Tulip (Aus). Accepting the award from TBA president Basil Nolan, Coolmore Australia's Tom Magnier said, “On behalf of the shareholders in Pierro, I just want to say thank you to the people here who supported him. He's got some great mares booked in again this year so the future is very bright for him.”

For the second year running Vegas Showgirl (NZ) (Al Akbar {Aus}) was voted Australian Broodmare of the Year thanks to the continued exploits of her daughter Winx (Aus) (Street Cry {Ire}) who recently resumed her campaign with an exciting win in the G2 Warwick S. at Randwick, her 18th consecutive victory. The final award was the Aushorse Breeder of the Australian-Bred Exported Racehorse and it went to the late Mr Enrique Cojuangco, breeder of the ill-fated Hong Kong champion Rapper Dragon (Aus) (Street Boss). To congratulate Australian breeders who contributed to another fine season of racing, TBA's Basil Nolan, said, “Our industry continues to go from strength to strength and I am delighted that we can gather today to celebrate the success of these outstanding individuals and the contribution they've made to the breeding and racing landscape of Australia and the world. I'd also like to take this opportunity to wish all breeders the best of luck for the upcoming season and I look forward to our industry enjoying another successful year.”