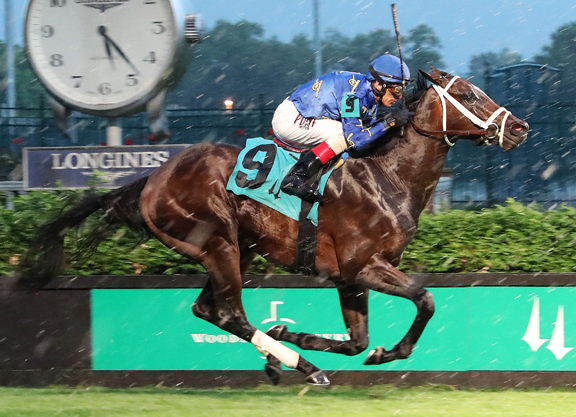 Disappointing when no better than fourth as the 13-10 favorite in the Eddie Logan S. at Santa Anita Dec. 29, the bay colt was a pacesetting runner-up to Hariboux (GB) (Havana Gold {Ire}) in the Feb. 29 Pasadena S. The form of that race was franked when Hariboux doubled up in the Cinema S. in June, while Smooth Like Strait took his show to Churchill for a handy success in the May 23 War Chant S. Third home that day was Field Pass (Lemon Drop Kid), who has since added a pair of black-type scores, including Keeneland's GIII Transylvania S. July 12.

Smooth Like Strait carries top weight of 124 pounds, as does Eclipse Award-winning juvenile Storm the Court (Court Vision), who makes his turf debut in the LaJolla. On the fringes on the Triple Crown trail this season, the bay was third to Authentic (Into Mischief) in the GII San Felipe S. in March and filled the same spot behind Dean Martini (Cairo Prince) when last seen in the GIII Ohio Derby June 27. He is bred to handle this surface switch, as his sire was the upset winner of the GI Breeders' Cup Mile, while his dam sire Tejano Run–perhaps best known for his runner-up effort in the 1995 GI Kentucky Derby–defeated the likes of Sandpit (Brz) (Baynoun {Ire}) in the GIII Fort Harrod S. at Keeneland on the grass the following season. Storm the Court breezed five furlongs on the turf at Del Mar July 26 in an easy 1:02 flat around the dogs in the company of his Grade III-placed stablemate Royal Act (American Pharoah).

Kanderel (Candy Ride {Arg}), bred on the cross over Storm Cat responsible for the likes of Horse of the Year Gun Runner and champion Shared Belief, among others, defeated Ajourneytofreedom (Hard Spun) by a head in the June 13 Alcatraz S. at Golden Gate, but proved he could class up here with a solid runner-up effort to the very talented Hit the Road (More Than Ready) in the restricted Oceanside S. over a mile July 10.