Smart Debut In the Mud From Exceed and Excel Filly 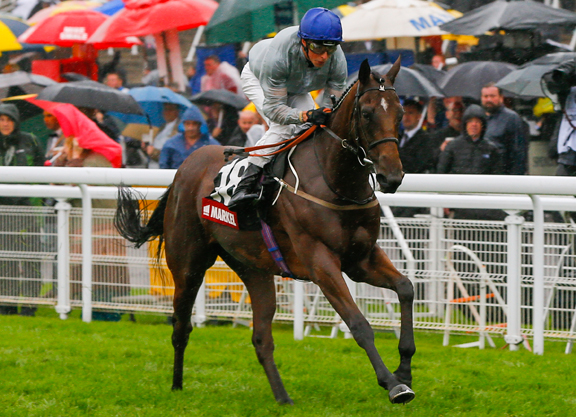 5th-GOO, £25,000, Mdn, 8-2, 2yo, f, 6fT, 1:16.96, sf.
THREADING (IRE) (f, 2, Exceed and Excel {Aus}–Chaquiras, by Seeking the Gold), sent off at 12-1, raced near the early pace out wide and travelled strongly to the front with 1 1/2 furlongs remaining. Sent clear soon after by William Buick, the homebred was eased late to record a six-length verdict over Your Choice (GB) (Foxwedge {Aus}). “She’s a nice-looking filly and it was a bonus that she went through that horrendous ground today,” her rider said. “She was a real professional in the race and has plenty of scope about her.” Trainer Mark Johnston added, “The only rule is there are no rules, as many would say that Exceed and Excels don’t go on soft but I’m a great believer that you can’t pigeon-hole a horse after 10 runs let alone before they have raced. I’m keeping my feet on the ground, as the ground may have inconvenienced others more. This filly has been a little bit low-key at home, but clearly that was a very impressive performance. She is a very strong and very powerful filly who will be back out before too long.” The dam is an unraced full-sister to the great Dubai Millennium (GB), which places her in elite territory. Without a hit so far, the granddaughter of the legendary GI Matron S.-winning producer Fall Aspen (Pretense) also has a yearling filly by Slade Power (Ire). Lifetime Record: 1-1-0-0, $21,356. Video, sponsored by Fasig-Tipton.
O-Sheikh Hamdan bin Mohammed Al Maktoum; B-Darley (IRE); T-Mark Johnston.