Siyouni's Sottsass Prevails In the Arc 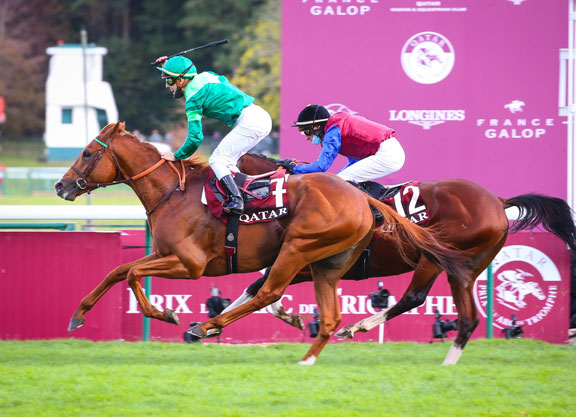 It was a home success in Sunday's G1 Qatar Prix de l'Arc de Triomphe as Peter Brant's Sottsass (Fr) (Siyouni {Fr}) realised his owner's longtime dream when providing him and Jean-Claude Rouget with a first renewal of the showpiece as Enable (GB) (Nathaniel {Ire}) failed to fire in sixth. Third in 2019, last year's G1 Prix du Jockey Club hero–who holds the record time in that Classic since the race was shortened to 10 1/2 furlongs in 2005–had stayed slightly under the radar as he was geared towards his second attempt but there were signs that he was nearing a peak when fourth in the G1 Irish Champion S. at Leopardstown Sept. 12. In an ideal spot throughout racing in a close-up third on the rail as Persian King (Ire) (Kingman {GB}) held the lead setting a moderate gallop, the 7-1 shot was delivered by Cristian Demuro to take control with a furlong remaining. Staying on strongly as In Swoop (Ire) (Adlerflug {Ger}) emerged on his inner, the chestnut held on by a neck as Persian King ended up 1 3/4 lengths away in third. “Just after the race last year, I stated that this was his race,” Rouget commented. “I've been waiting to win this for such a long time. I always thought he was a horse made for this and it was his only target. The result is there today.”

Only 1 1/4 lengths behind Enable in this last year, Sottsass had started his 4-year-old campaign with an uninspiring fourth in the G2 Prix d'Harcourt over a mile and a quarter May 11 before narrowly denying Way To Paris (GB) (Champs Elysees {GB}) in the 10 1/2-furlong G1 Prix Ganay at Chantilly June 14. Failing by a neck to give six pounds to the high-class Skalleti (Fr) (Kendargent {Fr}) in Deauville's G2 Prix Gontaut-Biron back over 10 furlongs on heavy ground Aug. 15, he was shaping like a true mile-and-a-half performer when closing steadily on Magical (Ire) (Galileo {Ire}), Ghaiyyath (Ire) (Dubawi {Ire}) and the surprise package Armory (Ire) (Galileo {Ire}) in the Irish Champion.

With the expected pace having disappeared with the absent Ballydoyle contingent, it was left to PC to make the running on the G1 Prix du Moulin de Longchamp winner Persian King but he was never going to over-do things on a proven mile star. With Olivier Peslier opting to ride a race on Stradivarius (Ire) (Sea the Stars {Ire}) and slot back alongside Frankie on Enable, there was a real possibility that this Arc would favour those closest to the pace and so Demuro deserved credit for keeping Sottsass so prominent. Little changed until the two-furlong pole, when the previous dual winner and 9-10 favourite looked to be going well enough as Frankie started to move.

Instead of spurting forward, Enable laboured and there was a melee involving her and Stradivarius soon after with neither able to take the gap as the 33-1 shot Gold Trip (Fr) (Outstrip {GB}) loomed on the outside and Sottsass switched to the left of Persian King. Leading the sprint for home, the White Birch Farm colour-bearer had slipped out of reach of the G1 Deutsches Derby hero In Swoop, whose forward momentum ultimately made it a closer call than it looked destined to be moments earlier. An inquiry was called into the scrimmaging, which in the older days of French stewarding may have seen a change in the outcome but which resulted in no altering to the placings.

“With the pandemic, his preparation had been far from ideal and the race in Ireland did him a lot of good,” Rouget added. “When we ran in Deauville he was a bit fat and Skalleti is a very good horse. He is a group one horse on soft ground, but we had to run in that race instead of going to York [for the Juddmonte International]. The choice to go to Leopardstown was tough, too, but we chose to run him over a shorter distance to give him speed. I think that was a good choice. He had given us the right signs lately that he was back to his best and at least at the same level as last season. He's fulfilled those expectations and was a very nice winner. Sottsass is owned in association with Coolmore. I do not know if he will run again, but it is not the question for today. Whether the horse retires is not my decision.” Peter Brant's racing manager Michel Zerolo said, “We're all very proud and hopefully he'll come out of this well and got to the [GI] Breeders' Cup Turf. Whether he'll stay in training is a question I can't answer now.”

In Swoop's trainer Francis-Henri Graffard said, “Nobody ever remembers the second, but he's run a very good race. The pace was not very strong and it didn't suit, as he travelled really nicely compared to usual but like he did in the Grand Prix de Paris he finished strongly in the last 200 metres. He is an improving horse and is proving one of the best 3-year-olds in Europe, so he's had a good season and we look forward to next year. He has a lot of class.” Fabrice Chappet said of Gold Trip, “He has run a great race, but I feel that on this heavy ground a mile and a half is a shade too far. He made a big move and hung at the end, but it was a great performance.”

Teddy Grimthorpe said of Enable, “Frankie said the ground was too deep. Anyway, she's given so much to the sport and to Juddmonte and who could have any complaints? We'll see how she comes out of this and discuss with Prince Khalid whether she can run one more time in the Breeders' Cup Turf.” John Gosden added, “It turned out be a French-style dash in the straight and it didn't work out for us and neither horse liked the deep, holding ground. They didn't have a hard race and they weren't blowing, so it was like an elaborate journey to go for a nice piece of work up the Longchamp straight! Mr Nielsen is keen to go for a fourth Gold Cup and Prince Khalid will make the decision on Enable. Frankie never touched her with the stick and both were looked after in that ground, so they are looking bright after the race which is extremely good news. Enable's been amazingly consistent and has been extraordinary in her mental lstrength, so it's a pity it wasn't good-to-soft ground and an even gallop today. We were lucky to have that in the other Arcs we ran in and today's race didn't play to her strengths at all.”