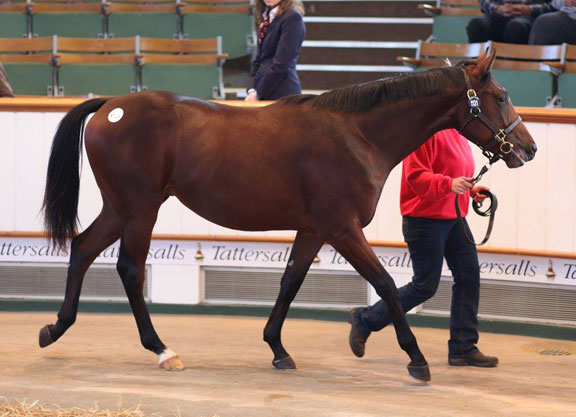 Philipp and Marion Stauffenberg's Siyouni (Fr) colt led the way during the final session of Book 2 at Tattersalls with a bid of 280,000gns from trainer Simon Crisford being enough to ensure that he remains in Newmarket for his racing career.

The half-brother to G2 Grand Prix de Chantilly winner Now We Can (GB) (Martillo {Ger}) (lot 1131) from a solid German family laced with black-type was bred by the Stauffenbergs from the three-time winner Notre Dame (Ger) (Acatenango {Ger}), whom they bought two years ago.

“It's a fantastic result for the stud and for all of us,” said Philipp Stauffenberg, who operates from Schlossgut Itlingen in Westphalia. “Notre Dame has a foal by Cacique and is in foal to Nayef–we've had her sex-tested and we know it's a filly so we are delighted about that.”

The reason for their delight is that they have enjoyed great success with Nayef in the past as the breeders of his G1 Prix de l'Opera winner Lady Marian (Ger).

Crisford, who has enjoyed a successful first season with a training licence, notching 20 winners from 72 runners headed by the G3 Solario S. winner First Selection (Spa) (Diktat {GB}), signed for two of the top three lots on Wednesday. Also joining his stable is a Dark Angel (Ire) colt (lot 1219) from Athassel House Stud, who represented another decent pinhooking result when selling for 250,000gns, having been bought by Paddy Twomey for €75,000 at Goffs.

A first foal, the late January colt is a great-grandson of G1 Tattersalls Gold Cup winner Rebelline (Ire) (Robellino), the dam of Group 3 winner Recharge (Ire) (Cape Cross {Ire}). Crisford said, “Dark Angel is an exceptional sire and we are really looking forward to this horse next spring. He is for the same new client as today's earlier purchase.”

The issue of a larger number of horses for the popular Book 2 section and Book 3, which follows hard on its heels today and tomorrow, affects both vendors and purchasers alike as the frustration of double-standings in stables means less time to view horses selling later in the week.

This was acknowledged by Chairman Edmond Mahony in his end-of-sale statement. He said, “All week buyers have commented that the best yearlings have been very hard to buy, which reflects the quality of the yearlings the vendors have brought to the sale. We have seen a cosmopolitan cast of buyers active throughout the week and competition at the upper end of the market has been the real feature over the past three days. Last year's wide-margin record number of six-figure lots has been exceeded, with more than 120 yearlings making 100,000 guineas or more and the obvious highlight was the new record top price of 725,000 guineas for Gestut Fahrhof's outstanding Dubawi colt out of Goathemala.”

“It would be wrong, however, to pretend that it has been plain sailing at all levels of the market,” Mahony added. “After last year's outstanding sale, demand for places in Book 2 was overwhelming and the extra numbers have not only posed logistical challenges, but also contributed to a market which has at times been selective. Numerically, Book 2 of the Tattersalls October Yearling Sale has long been the largest yearling sale in Europe, but the 915 yearlings we have catalogued this year significantly exceeded the optimum numbers which made last year's Book 2 such an extraordinary renewal.”

“Looking ahead to Book 3 of the October Yearling Sale, we still have plenty of good solid commercial yearlings to sell over the next two days,” he concluded. “All Book 3 yearlings are eligible for the £150,000 Tattersalls October Auction Stakes and buyers still have plenty of opportunities to find both quality and value for money.”

Splitting the pair of Crisford purchases at the top of the table was Mountain View Stud's son of Kodiac (Ire) (lot 1305), who was pinhooked as a foal by Barry Mahon and Michael Fitzpatrick for 48,000gns. The good-looking colt was on the hit list of the Hong Kong Jockey Club, whose Mark Richards prevailed in the bidding battle with a final call of 260,000gns.

“He has a real look of quality about him and has done everything well,” said Mahon. “He's a real beauty and he's really improved the summer. It helps that Kodiac is just a phenomenal stallion.”

Five winning half-siblings, including the listed-placed Singeur (Ire), are testament to the colt's dam Singitta (GB) (Singspiel {Ire}), but ultimately it was sire power that counted for Richards, who said, “Kodiac should get horses who are suited to Hong Kong. They are fast and durable and go on all types of ground.”

He added, “We have just one by the stallion so far and he sells at the sale in March. This chap has a little more quality than some often have, but that will be a good thing hopefully.”

Chantal Regalado Gonzalez is likely to play a starring role at the Tattersalls December Mares' Sale as the vendor of G1 Investec Oaks winner Qualify (Ire) (Fastnet Rock {Aus}), but she stepped into the role of purchaser on Wednesday when going to 200,000gns for lot 1167, a Shamardal half-brother to listed winner Rock Jock (Ire) (Rock Of Gibraltar {Ire}). Offered by the Castlebridge Consignment, the April foal is a son of G3 Brownstown S. winner Perfect Touch (Miswaki).

Hugo Lascelles, the co-breeder of Classic winner and first-season sire Power (GB) (Oasis Dream {GB}), enjoyed a good final session through his Lofts Hall Stud, which sold two of the top six lots of the day. Lot 1246, a Fastnet Rock (Aus) daughter of the G3 Summer S. winner Rose Blossom (GB) (Pastoral Pursuits {GB}), went the way of BBA Ireland's Adrian Nicoll, who outlasted David Simcock at 220,000gns, while a similarly well-bred Lawman (Fr) filly (lot 1315) reached 190,000gns when sold to Bertrand Le Metayer. The French agent confessed to a penchant for the stock of Lawman, and added that the first foal of four-time winner Smart Steps (GB) (Montjeu {Ire}) will be trained in either Britain or Ireland.

Her family has had a tremendous boost this season through the exploits of G1 Investec Derby and G1 Qatar Prix de l'Arc de Triomphe winner Golden Horn (GB) (Cape Cross {Ire}), whose grandam Nurayana (GB) is the filly's fourth dam.

Shadwell was once again the leading buyer at Book 2, with 39 yearlings acquired for a total of 4,609,000gns. Among those purchased in the final session was a colt by the red-hot sire of the moment, Dark Angel (Ire). Lot 1205, consigned by Baroda & Colbinstown Studs, is the second foal of Queen Myrine (Ire) (Oratorio {Ire}), a daughter of GII Palomar H. runner-up Slewvera (Seattle Slew) and sold for 180,000gns. Dark Angel's phenomenal rise to sales-ring popularity saw his 44 Book 2 yearlings record an aggregate of 4,115,000gns, selling at an average price of 93,523gns.

Galileo's son Teofilo (Ire) has enjoyed a terrific season in Europe with G1 Tattersalls Irish 1000 Guineas winner Pleascach (Ire) among his big-hitters, while in the Southern Hemisphere his talents as a sire have been highlighted by G1 George Main S. winner Kermadec (NZ). Such results have clearly not been overlooked by Australian-based operation Sun Bloodstock, which went to 180,000gns in pursuit of lot 1278. The May-foaled colt is a half-brother to three multiple winners for the Diesis mare Sentimental Value, herself the victrix of the Listed Matiara S. at Hollywood Park.

Bought back by his vendor for 65,000gns at the December Foal Sale, his yearling sale price marked another good return for James and David Egan's Corduff Stud, which enjoyed a memorable performance in Book 1 when selling six yearlings for an average of 508,333gns.

Choisir Colt A Corker For Kent…

Nicola Kent brought just one yearling to Tattersalls for Book 2, but her homebred Choisir (Aus) colt (lot 1156) caught the eye of plenty potential buyers, with David Redvers of Qatar Racing being the final lucky bidder at 150,000gns.

A hard-working member of an extended clan of breeders and farmers in County Cork, Kent's voice cracked with emotion as she spoke of the son of the Barathea (Ire) mare Pashmina (Ire), whose family has been closely associated with her own for six equine generations.

“My father bought Nonnie (GB) here for 80gns–she's not even on the page but she's this colt's fifth dam and the grandam of [Irish champion 2-year-old] Pass The Peace (GB),” said Kent, who bred the strong chestnut in partnership with her mother Eleanor at their Ballyhampshire Stud. They have retained the colt's juvenile half-sister by Bahamian Bounty (GB), whom they plan to put into training.

Choisir, who shuttled successfully for Coolmore between 2004 and 2014, is much missed in Europe and he has already worked well with the family as the sire of Pashmina's Group 3-winning half-brother Monsieur Joe (Ire).

Kent added of her highest priced yearling to date, “This horse has been so lovely to deal with, he's never put a foot wrong. The cross has worked before so let's hope he goes on and I'm delighted David Redvers has bought him. Monsieur Joe has already done the business.”