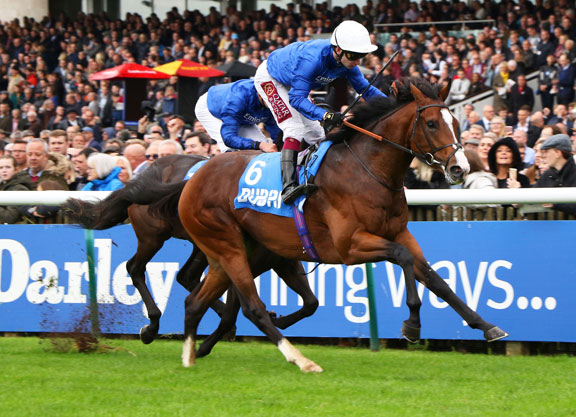 The Dubai World Cup Carnival gets underway at Meydan on Thursday with its traditional opener, the G2 Al Maktoum Challenge R1 going a mile on the dirt with a well-matched field of 11 lining up. Group 1 winner Capezzano (Bernardini) is the highest-rated of the bunch at 117, but the 7-year-old gelding isn't always straightforward. He beat Thunder Snow (Ire) (Helmet {Aus}) by 9 1/2 lengths in the G1 Al Maktoum Challenge R3 two years ago before trailing him by 32 lengths when last in the G1 Dubai World Cup, and last season he won the G3 Firebreak S. over this course and distance by seven lengths before being eased late on in the Saudi Cup. In his first appearance since, Capezzano was third in the Dec. 17 Listed Dubai Creek Mile over this track and trip, leading before being caught late by Thegreatcollection (Saint Anddan) and Secret Ambition (GB) (Exceed and Excel {Aus}) while carrying a penalty.

Thegreatcollection, who is making the third start of this prep having also been second in a conditions race over the course and distance on Nov. 19, will be the only horse to break outside of Capezzano and is one of two here for Doug Watson, who also sends out the defending winner Kimbear (Temple City). Kimbear makes his first start since finishing fifth in the G3 Burj Nahaar on Super Saturday last season.

“Both are in good shape at home,” Watson said. “Obviously Thegreatcollection has the advantage of two runs under his belt whereas Kimbear does not, but we think both will run well.”

“Quip, we think, is our best chance and we hope he can show his true form this season, his first with us,” Seemar said. “Emblem Storm (English Channel) is working very well and Roman Rosso (Arg) (Roman Ruler) is a nice horse who can also run well.”

Fawzi Nass's Salute The Soldier (Ger) (Sepoy {Aus}) looks to build on a 5 1/2-length score in last year's Burj Nahaar, and he has never been worse than fourth in his four UAE outings.

Uruguayan trainer Antonio Cintra returns to the carnival for the first time since 2010 with three runners on the card, including Ajuste Fiscal (Uru) (Ioya Bigtime), winner of the G1 Gran Premio Jose Pedro Ramirez going a mile and a half on the all-weather last January and a listed race over a mile when last seen on Sept. 6.

“It is great to be back and part of the carnival again,” Cintra said. “This is the best of the horses I have here this year and he is very good on dirt. The trip will be a minimum for him, but the second and third rounds are over further and will suit him better.”

The G2 Singspiel S. over 1800 metres on the turf features the return of a handful of intriguing European-based pattern race winners. Saeed bin Suroor looks to defend his title in the race, having taken it last year with Benbatl (GB) (Dubawi {Ire}), and he has excellent chances with the lightly raced 4-year-old Military March (GB) (New Approach {Ire}) and course and distance Group 1 winner Dream Castle (GB) (Frankel {GB}). Military March won the G3 Autumn S. as a 2-year-old and makes his first appearance since finishing fourth in last year's G1 2000 Guineas.

“The race has been very kind to us, especially recently, and we have two good chances this time,” said bin Suroor. “Dream Castle loves racing in Dubai and just seems to come to life in the sunshine. He is in great form as is Military March, a lot less experienced horse, but a very smart one. Both should run well in what looks a strong renewal.”

Charlie Appleby saddles three, with Zakouski (GB) (Shamardal) looking his best chance on paper, and the trainer confirmed that last season's G2 Zabeel Mile winner has been targeting this spot since taking a listed race at Newmarket on Oct. 31.

“Zakouski was very progressive at the carnival last year and won his second start back in the UK,” Appleby said. “That was his latest appearance, at the end of October, after which we put him away with this race in mind.”

The 2019 G1 Queen Anne S. scorer Lord Glitters (Fr) (Whipper) looks for his first win since, and he has not been far off having been placed three times in stakes company last summer. Kinross (GB) (Kingman {GB}), a talented-looking juvenile of 2019 who got back on track with a listed win over this trip at Kempton on Nov. 18, makes his first start for new owner Marc Chan.

Godolphin looks to have a stranglehold on the seven-furlong G2 Al Fahidi Fort, with bin Suroor and Appleby each sending out three runners. Appleby sends out the last two winners of this race, Glorious Journey (GB) (Dubawi {Ire}) and D'bai (Ire) (Dubawi {Ire}). The 6-year-old gelding Glorious Journey won this race last year and signaled his wellness with a listed score over this trip at Newbury on Sept. 18 and a third in the G2 Challenge S. on Oct. 9. D'bai won the 2019 Al Fahidi Fort and comes into this off a short break following a busy European summer in which he won a seven-furlong Haydock conditions race before finishing third behind Glorious Journey in the Dubai Duty Free Cup S.

Satish Seemar once again holds a strong hand for the G3 Dubawi S. over 1200 metres for dirt sprinters, with defending winner Gladiator King (Curlin) rated highest for his first appearance since a third in the Saudi Sprint on Feb. 29. Those efforts bookended a victory in the G3 Al Shindagha Sprint last January. Gladiator King is ideally drawn in three, while his stablemate Bochart (GB) (Dubawi {Ire}) is posted further out in nine. Bochart, the winner of a pair of handicaps over this course and distance last carnival, interestingly gets stable jockey Richard Mullen, while Gladiator King has Mickael Barzalona in the saddle. Bochart warmed up for this with a third in the course and distance Listed Garhoud Sprint on Dec. 3.

Ismail Mohammed's Good Effort (Ire) (Shamardal) is an intriguing contender, having not been beaten in five starts since December of 2019. Taking an extended holiday after winning the Listed Cleves S. on Feb. 1, the 6-year-old shook off the dust with wins at Lingfield in handicap and listed company on Nov. 4 and 14. Likewise, Antonio Cintra sends out the 3-year-old Upper Class (Brz) (Tiger Heart), a listed winner in Uruguay who is unbeaten in four starts and was last seen winning a conditions race on Nov. 15.

The card is completed by a pair of competitive listed contests, beginning with the Listed Dubai Racing Club Classic over 2410 metres on the turf, where the former Mark Johnston charge Communique (Ire) (Casamento {Ire}) makes his debut for Salem bin Ghadayer. Communique won the G2 Jockey Club S. and G2 Princess of Wales's Tattersalls S. over this trip in 2019 and though he failed to win in 2020, he was second four times including to Barney Roy (GB) (Excelebration {Ire}) in the G1 Grosser Preis von Baden.