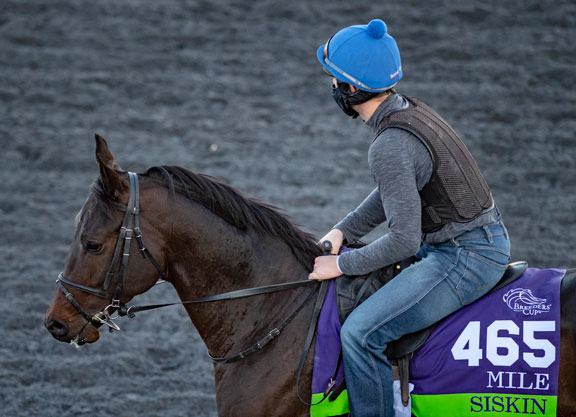 LEXINGTON, KY–In the 36-year history of the Breeders' Cup, few owners have been so intertwined with the event as has Khalid Abdullah's Juddmonte Farms been. The operation's 80 starters at the meeting are bettered only by Godolphin and the Coolmore partners, while its seven winners and over $16-million in prizemoney at the Breeders' Cup is only slightly inferior to the record accrued by Coolmore.

Juddmonte and the Breeders' Cup, in fact, have nearly come of age together. At the time that the inaugural Breeders' Cup was staged at Hollywood Park in 1984, Prince Khalid had owned racehorses less than five years. The Saudi Royal had his first runner at the second Breeders' Cup at Aqueduct in 1985, when Queen Anne, Sussex S. and Prix du Moulin winner Rousillon contested the Mile, but it wasn't to be that day for the favourite, who settled for ninth after a luckless trip. Rousillon went on to gain further aclaim as the sire of Vintage Crop, the first Northern Hemisphere-trained horse to win the G1 Melbourne Cup in 1993.

Though that maiden voyage didn't pan out as hoped, Prince Khalid was not deterred and tripled down on the 1986 'Cup at Santa Anita, lending the event some serious star power in the form of Dancing Brave. Still regarded as one of the best Prince Khalid has ever raced on either side of the Atlantic, Dancing Brave came into the Breeders' Cup Turf off wins in the 2000 Guineas, Eclipse S., King George VI and Queen Elizabeth S. and the Prix de l'Arc de Triomphe. Struck in the eye by a clod of turf in-running, Dancing Brave checked in fourth.

It is remarkable, in hindsight, that it took Juddmonte 16 years and 24 starters to break its Breeders' Cup duck, but it did so at last at Belmont Park in 2001 when the G1 Coronation S. winner Banks Hill (GB) (Danehill) ran away with the Filly & Mare Turf by 5 1/2 lengths for Andre Fabre and Olivier Peslier. Juddmonte repeated the dose in the same race four years later with Banks Hill's full-sister Intercontinental (GB), remarkably back at Belmont Park. Intercontinental's foundations had been laid by Fabre, but by that stage she had been transferred to Prince Khalid's beloved Bobby Frankel.

Juddmonte's Ventura (Chester House) provided Frankel with one of his last major wins in the Breeders' Cup Filly & Mare Sprint of 2008; the legendary trainer died of cancer just over a year later aged 68. And while Frankel's famous equine personification-so meticulously chosen by Prince Khalid-was never himself given the chance to contest the meeting at which his namesake won six races, Juddmonte did grace the 2018 edition of the Breeders' Cup with another of its true legends: the 11-time Group 1 winner Enable (GB) (Nathaniel {Ire}), who at Churchill Downs became the first horse to win the Prix de l'Arc de Triomphe and the GI Breeders' Cup Turf (or any Breeders' Cup race, for that matter) in the same year. Add to that a GI Breeders' Cup Mile win by Expert Eye (GB) (Acclamation {GB}) on the same card, and it was the kind of day that had been years in the making for Juddmonte at the meeting that it had perennially thrown so much support behind; in the interim between Ventura and Enable, Prince Khalid sent out six-time Group 1 winner Midday (GB) (Oasis Dream {GB}) to take the 2009 Filly & Mare Turf-she was, incidentally, trained by Frankel's late conditioner Sir Henry Cecil–and its great American champion Arrogate to win the 2016 GI Classic.

After sitting out the 2019 Breeders' Cup at Santa Anita, Team Juddmonte returns in 2020 with the formidable duo of Siskin (First Defence) for the Mile and Tacitus (Tapit) for the Classic. Though the pair, both homebreds, are trained an ocean apart, they have much more in common than simply their pink and turquoise silks; they are both descendants of Silver Star (GB) (Zafonic), a Juddmonte homebred out of Monroe (Sir Ivor), a foundation mare for Khalid Abdullah who was part of the very first batch of fillies he accrued in the late 1970s and a daughter of the excellent producer Best In Show. Silver Star is the second dam of Siskin and the third dam of Tacitus. While Silver Star's branch of the Monroe line includes her G1 Dewhurst S.-winning sire son Xaar (GB) and Tacitus's five-time Grade I-winning dam Close Hatches (by Siskin's sire First Defence), Monroe has had a far-reaching impact in other directions, too, with other descendants including sire brothers Cityscape (GB) (Selkirk) and Bated Breath (GB) (Dansili {GB}), and last year's G1 St Leger winner Logician (GB) (Frankel {GB}).

Rising Tornado and Bird Flown (GB) (Oasis Dream {GB}) were born six years apart and on different continents, but both ended up in the yard of Andre Fabre. Each managed one win in her relatively brief career, but their pedigrees meant that they were given a chance in the elite Juddmonte broodmare population. More specifically, they were both expatriated back to Juddmonte's American satellite to patronize resident sire First Defence, a Grade I-winning sprinter by Unbridled's Song out of Honest Lady (Seattle Slew), a Grade I-winning daughter of another iconic Juddmonte producer, Toussaud (El Gran Senor). Completely unsurprisingly, it turned out that the team at Juddmonte knew just what they were doing: Rising Toronado's first foal was Close Hatches and she produced two other winners by First Defence including the listed winner and GI Kentucky Oaks third Lockdown before First Defence was sold to stand in Saudi Arabia.

Bird Flown, meanwhile, visited First Defence in his final two seasons in Kentucky, the second mating producing Siskin. He has proven an embodiment of the potency of the Juddmonte blood on both sides of the Atlantic being by a sire from the third generation of a family flawlessly cultivated in Kentucky and out of a mare that brings together two of the farm's European foundation mares in Monroe and Bahamian. The mould was somewhat broken with Siskin when he was entrusted to Ger Lyons, and that rising Irish trainer has held up his end of the bargain with aplomb, sending the colt through an unbeaten, Group 1-winning juvenile campaign and onto Classic success at three. A win at Keeneland on Saturday would place him in rarefied air, indeed.

The stories continue to be written, too, for Bird Flown and Rising Tornado. The former provided Juddmonte's six-time Group 1 winner Flintshire (GB) (Dansili {GB}) with his first winner in September in Talacre-she, too, is in the care of Ger Lyons. Rising Tornado has a yearling colt from the first of just three crops by Arrogate, and after failing to produce a live foal this season was covered by Quality Road.