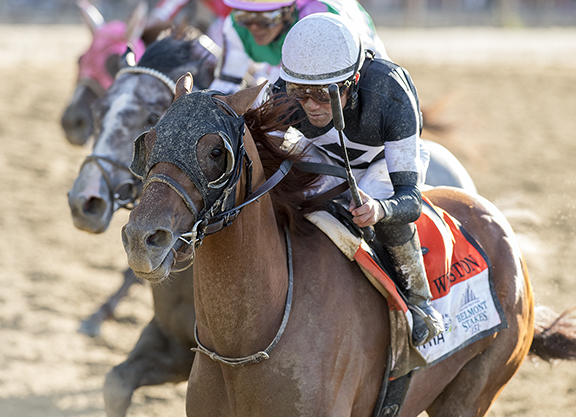 Tracy Farmer's GI Belmont S. hero Sir Winston (Awesome Again), sidelined since shortly after his victory in the Test of the Champion due to a left front ankle injury, posted a bullet half-mile breeze in :47 3/5 (1/90) Sunday morning at Fair Grounds and is pointing towards a return in the Woodchopper S. on grass Dec. 28 at the New Orleans oval.

“He shipped in a couple of days ago and he galloped Saturday,” David Carroll, assistant to trainer Mark Casse, told the Fair Grounds notes team. “We were looking to just get his feet over the track [Sunday] in a breeze. The track seemed fast early on, and he's not normally a good work horse, but this morning he went quick and did it very nicely.”

Following his 10-1 conquest of the Belmont, Sir Winston developed what was termed a minor injury less than two weeks later and was sent to Casse's personal training center in Ocala to rehab.

“Huge credit to Mitch Downs and crew at Ocala who took him in after the Belmont and have nursed him back,” Carroll said. “They have done a terrific job getting him back to this stage and condition wise he looks excellent. We'll do something more serious with him next weekend and continue getting him ready to go.”

Though he has raced over dirt in his last five starts, Sir Winston tried turf once before to no avail, running ninth in a Saratoga maiden special weight last summer. He showed more over the Tapeta surface at Woodbine, however, winning the Display S. and running third in the GIII Grey S. as a juvenile.

“It's [restricted to] 3-year-olds and we need to get him started somewhere,” Carroll explained of the barn's decision to bring Sir Winston back in a turf tilt. “That's the most logical spot to get him back. Like I said, he's not the easiest work horse in the morning, so sometimes he needs some racing to get back into form, but we are really happy with Sunday morning's work and the way he's been since we got him back. We're looking for a good 4-year-old year with him and the way he's been so far, we have no complaints. It's always exciting having the Belmont winner in the barn.”