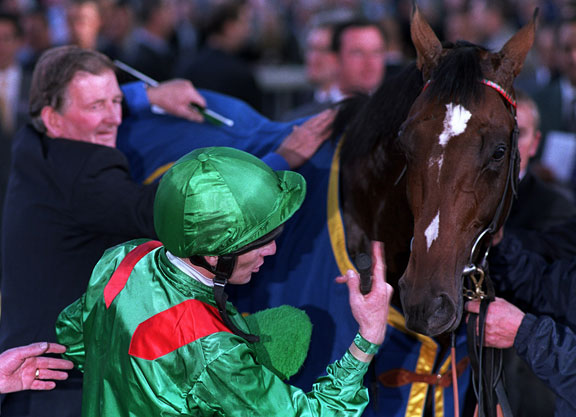 European champion 3-year-old Sinndar (Ire) (Grand Lodge-Sinntara {Ire}, by Lashkari {GB}), who is the only horse to capture the G1 Epsom Derby, G1 Irish Derby and G1 Prix de l'Arc de Triomphe in the same year, has passed away, the Aga Khan Studs announced on Monday. The Aga Khan homebred was 21.

Trained by John Oxx, the bay won his first two starts at two, including the G1 National S. in 1999, but would be even better as a sophomore. A close second in the Listed Ballysax S. returning at three, his only career loss, Sinndar rebounded in the G3 Derrinstown Stud Derby Trial S. at Leopardstown in May before his victory at Epsom on June 10. He added the Irish equivalent by a commanding nine lengths that July and resurfaced with a blow-out win in the G2 Prix Niel at Longchamp that September, prior to his career finale in the Arc.

“No horse can get by him,” regular rider Johnny Murtagh said after the colt's Arc victory. “He's got speed, he's got staying ability and a great heart. He's the best horse, a true champion.”

“He's a great horse and a worthy winner of the Arc in the year 2000,” said trainer John Oxx at the time. “He's set a standard there that will be hard enough for others to match and I'm sure that when we get to the year 2099, they will still write about this horse.”

Retired with a mark of 8-7-1 and $2,571,884 in earnings, the son of Irish highweight Sinntara stood his first five seasons at Gilltown Stud under the Aga Khan Studs' banner, before taking up covering duties at Haras de Bonneval in 2006. His final two years at stud were spent at Haras National du Lion d'Angers in 2016/17. Overall, he sired 20 stakes winners, among them Group 1 winners Rosanara (Fr), Shareta (Ire), and Shawanda (Ire) as well as Youmzain (Ire), who played bridesmaid in three-straight Arcs. His get also included Scandinavian champion Eye In The Sky (Ire) and Swiss highweight Oak Harbour (GB). As a broodmare sire, Sinndar already has Classic winners Flotilla (Fr) (Mizzen Mast) and Trading Leather (Ire) (Teofilo {Ire}).