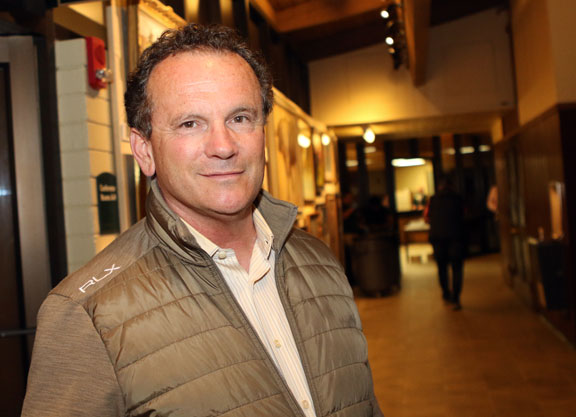 LEXINGTON, KY–John G. Sikura is not afraid to think outside the box when it comes to his stallion roster at Hill 'n' Dale Farm in Kentucky, and indeed he is not prone to allowing such fickle factors as marketplace fashion to sway his belief in the long-term potential of an animal.

These traits are apparent in his own pedigree-his father, the late great Canadian breeder and stallion master John Sikura Jr., had a tendency of shaking up the status quo during the Windfields Farm reign of the 1960s and 70s by importing various American stallions-and Sikura has rolled the dice with success on some unconventional horses. Stormy Atlantic was a minor stakes winner by Storm Cat that Sikura purchased before he had runners, and who went on to be a reliable source of high-class horses. Maclean's Music (Distorted Humor) posted the highest-ever debut Beyer Speed figure (114) in his lone racecourse appearance and sired GI Preakness S. winner Cloud Computing in his first crop and later the GI Champagne S. winner Complexity among 17 stakes winners from four crops of racing age. The obscurely bred Grade I winner Candy Ride (Arg) started at Hill 'n' Dale before later relocating to Lane's End. Sikura developed the sires of last year's American champion 3-year-old colt Maximum Security (New Year's Day) and champion 2-year-old filly British Idiom (Flashback) for four figure fees. Medaglia d'Oro was a high-profile retiree to Hill 'n' Dale in 2005, but stood just one season there before his owner at the time, Audrey Haisfield, opened Stonewall Farm.

Sikura's enterprising nature will be tested once again this season when the first-crop 2-year-olds of five-time Group 1 winner Flintshire (GB) (Dansili {GB}) hit the racetrack, but before that Sikura will be kept busy by another task: assembling the first book of his latest stallion project, the Coolmore partners' dual stakes-placed Lost Treasure (Ire) (War Front).

The 5-year-old Lost Treasure enters stud at Hill 'n' Dale this year for $5,000, and he brings along with him one of the most sought-after pages in the stud book: he is out of the G2 Rockfel S. winner Wading (Ire) (Montjeu {Ire}), who is herself a sister to GI Belmont Oaks winner Athena (Ire) (Camelot {GB}) and G1 Irish Oaks winner Bracelet (Ire) (Montjeu {Ire}). They are out of the stakes-placed Cherry Hinton (GB) (Green Desert), a half-sister to Galileo (Ire) and Sea The Stars (Ire) as well as Grade/Group 1 winners Black Sam Bellamy (Ire) and My Typhoon (Ire) and the stakes-winning fillies All Too Beautiful (Ire) and Melikah (Ire), who are each establishing their own dynasty at stud.

One start at two for Lost Treasure resulted in a seventh-place finish in a Naas maiden in October. He was off the track for 10 months thereafter but in typical Aidan O'Brien genius made two starts within five days at The Curragh upon returning, winning both. And the tempo didn't wane at all from there: wheeled back yet again eight days later, Lost Treasure finished fourth in a Navan handicap before three weeks later posting a victory over six furlongs on the Dundalk all-weather. Nine days further on it was the G1 Prix de l'Abbaye in France, where he was beaten just a length in fifth behind Mabs Cross (GB) (Dutch Art {GB}). Two weeks later Lost Treasure picked up black-type when beaten a short head in second in Navan's Listed Testimonial S., and five days later he repeated the dose when checking in third in Dundalk's G3 Mercury S. Two weeks and a transatlantic flight later, Lost Treasure at last put the wraps on a dizzying 3-year-old campaign when seventh in the GI Breeders' Cup Turf Sprint. He made just one start last year when well beaten in the G1 Al Quoz Sprint.

One could fairly assume that a horse with a pedigree like Lost Treasure's who failed to win at the highest level could have fallen into Sikura's hands as a cast-off, but the story in fact goes quite differently.

“I go to Ireland a couple of times a year, and Lost Treasure was a horse I was aware of after seeing him at Aidan O'Brien's yard,” he explained. “I have always admired the horse; he is from one of the greatest, if not the greatest, families in Europe and the world.

“I spoke with the team at Coolmore for nearly two years about this horse. He is a horse that I really thought had a great chance to come to America and be an outstanding sire prospect. Aidan O'Brien told me Lost Treasure had wonderful talent and although they didn't get the best out of him, they never aimed down with him. He traveled to the Breeders' Cup and was beaten a length in a Group 1 in France.

“Lost Treasure was not for sale; they had had a lot of interest in him and a lot of opportunities, but had refused to sell. But I have a good relationship with the Coolmore team and was able to get involved in the horse.”

Sikura said he is not concerned about the lack of a black-type win on Lost Treasure's record.

“Historically, you can look at a sire like Vice Regent, who won two races and never got to show his best,” Sikura said. “The story of Danzig is one everybody knows about. Historically, there are more horses like that that have become important sires than people would ever imagine. You never know who's going to make it, but Lost Treasure certainly has all the tools and checks every box; if you could build a horse with his pedigree, his sire, sires in the family, precocity; he really has all those elements with a great body and presence about him. He has all the attributes that if we look back five years from today and he's a leading sire, nobody would be able to say, 'gee, where did that come from?'”

Sikura's belief in the horse is readily apparent, and he said he will support Lost Treasure like he did Maclean's Music and as he is doing with Army Mule, the lightly raced Grade I-winning sprinter who stands his second season this year.

“It's tougher in today's market, so if you're standing a horse like him you have to be prepared to breed your own mares, direct your clients and personally direct his book. We did it with Maclean's Music and we're doing it with Army Mule with great support from [racing owner] Vinnie Viola, and we're going to do the same thing with Lost Treasure. We'll get Coolmore mares, our mares, client mares; we'll be actively buying mares and really assembling his book rather than being passive and seeing what's going to happen.

“I think with sires, the genetic switch is on or off. If it's on, they're going to get runners. If you look at Into Mischief and these other horses [that have started at low fees] and made it, all they had to do was have foals on the ground. If they're superior horses, they'll climb the ladder. All you can do is have a representative crop; we don't know if they'll be dirt or turf, or what will work, but if you've got foals on the ground and they're going to be runners, they'll find their way. And we believe Lost Treasures' will find their way.”

Indeed, Lost Treasure's genetics would presumably predispose his progeny to success across a variety of realms; he was a sprinter on both the turf and all-weather but from a family best known for its Classic influences, while War Front in the past two seasons has seen his versatility shine through with horses like Preakness winner War of Will and Omaha Beach, the winner of three Grade Is on the dirt last year from as short as 1200 metres and up to 1800 metres.

So while Lost Treasure need not be pigeonholed as a turf sire, it is possible the market could label him as such. While opportunities for racing on the turf in the U.S. have grown in recent years, that enthusiasm hasn't yet followed through in the sales ring, and Sikura would be perhaps more aware of that than anyone. Hill 'n' Dale's Kitten's Joy led all American sires by earnings in 2018 and was 11th last year, but one had to scroll all the way down in 97th place to find him on the yearling sales average table in 2019. Similarly, Flintshire's haul of five Group 1 wins was second only to California Chrome in his sire crop, but he could do no better than 14th among first-crop yearling sires last year.

Sikura was philosophical about the situation, theorizing that the gap will close in time.

“Any time you try something new, there is a lag time between the idea, the enactment and then people changing their program to follow along,” he said. “I think success [of turf sires] in the sales ring, the commercialism, that will come over time and it will probably take three, four or five years for people to catch up to the opportunities.

“Horses follow the money. If a turf yearling you love very much is worth $150,000 and he has everything, and the same equivalent dirt yearling is a $500,000 yearling, people are going to start to see value for dollar. They're going to see opportunities to run and they're also going to see, upon the conclusion of the racing career or midstream in the career that they have the ability to sell these horses to other countries that race on the turf exclusively or predominantly. Therefore, the value of your horse as a racing prospect to be sold on is probably higher than a dirt horse. So there are a lot of angles and I think people are catching up with that, and I'm not worried about the commercial aspect.”

Lost Treasure undoubtedly has the pedigree to make it, and he showed on the racecourse he has the toughness. Sikura said he also that important quality that is much less tangible: class.

“It's hard to define class, but when you look at Lost Treasure, he has it,” Sikura said. “He exudes the fact that he's royally bred and he's from a really important female family, a family of sires and he gives that aura when you set eyes on him.”