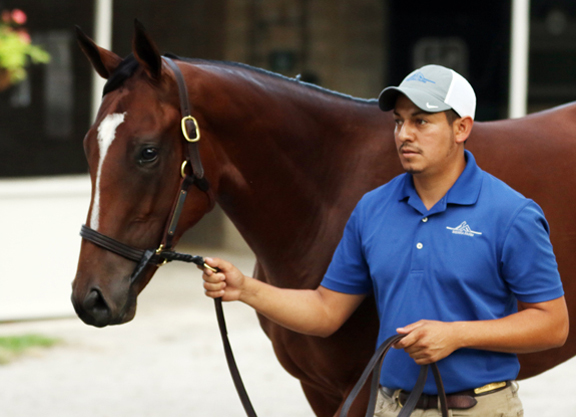 Sierra Farm, in the culmination of a dozen years breeding in Central Kentucky, had its first seven-figure sale when Larry Best bid $1.4-million to acquire an American Pharoah colt from the operation at last year's Keeneland September Yearling Sale. The milestone moment was bittersweet for the team, though, as the farm's co-founder Ed Hudon passed away just hours later. Now solely owned by Hudon's widow, Sharon, Sierra Farm returns to the September sale next week with an 18-horse consignment and off a weekend of racing which featured a pair of impressive farm graduates.

“Surreal,” Sierra farm manager Mike Callanan recalled of last year's sale. “That is probably the best way to describe it. It was a very, very proud moment for everybody on the farm, but it was very much tempered. I suppose, looking back, it was exactly what Ed, and all of us, had been working the last 10 or 11 years to get to. It was very satisfying, but it would have been great if Ed was there. Sharon had picked out the mare and Ed and I were there buying her. And he saw the baby being born and grow up. He wasn't there for the last day, but it was what he had worked to get to. He would have been very, very proud.”

While it was a son of American Pharoah out of Bsharpsonata (Pulpit) who had Sierra in the headlines last September, it was another colt by the Triple Crown winner bred by Sierra Farm and out of Mighty Renee (Maria's Mon) who was turning heads at Del Mar Saturday. American Theorem, who RNA'd for $190,000 at last year's September sale, was purchased privately by Kretz Racing and produced an impressive 1 1/2-length debut win for George Papaprodomou.

“I tell you, Ed would have been even more proud with the horse that won on Saturday,” Callanan said of American Theorem. “Mighty Renee was his favorite mare on the whole farm and he loved that foal from the day he was born. He used to drive up to the barn every morning to bring him in.”

Callanan admitted he was surprised by the disparity in the two colts at last year's September sale.

“I had two Pharoahs and the two of them were really turned out together right up until the sale,” he said. “In my eyes, there wasn't much to separate them. I thought American Theorem had a great mind on him, but he wasn't as athletic as the other guy. But also, he was a February foal and the other guy was a May foal. I think he maybe got overshadowed a little bit because he was with the other guy. People would come to see the two American Pharoahs and they looked at the one and then the other, he just wasn't as flashy a walker as the Bsharpsonata. Maybe in hindsight, we should have separated them. Maybe we should have put him in the July sale or in Saratoga. He might have stood out a little better there. But hindsight is 20-20.”

Callanan continued, “We had him sold to a different client, they turned him back for some ridiculous reason, and Gayle Van Leer ended up buying him privately for the same money. She's been keeping us up to date with him the whole way along and he's just been a star from the beginning. So it all ended up the way it was supposed to end up.”

While neither Bsharpsonata nor Mighty Renee have yearlings in the September sale, the Sierra consignment did receive a timely update when Rick Kanter's Doc Boy (Into Mischief) strode home first in the Kitten's Joy S. at Colonial Downs last Saturday. Trained by Mike Stidham, the colt is now two-for-two on the turf.

Sierra Farm will offer the juvenile's half-sister by Elusive Quality (hip 582) during Friday's fourth session of the September sale. The yearling is out of the unraced Peggy May (Lemon Drop Kid), a daughter of GI Breeders' Cup F/M Turf winner Perfect Sting (Red Ransom).

“That was big for us for the upcoming September sale because of the Elusive Quality filly,” Callanan said of the stakes win. “She is in Book 2. We were pretty forward with her in Book 2, she's probably a Book 3 or 4 pedigree, but she is such an outstanding physical, we put her in Book 2, and now we have the update. So I think we're going to be in good shape with her. She is a beautiful filly, absolutely gorgeous.”

“That's a nice young mare that Sharon bought herself–Ed had nothing to do with that mare at all,” Callanan said of Peggy May. “It's nice to have a young mare like that get black-type with her second foal. Hopefully she can go on. You see the foals that are coming out of her, and you'd have every hope that she's going to keep doing it. Hopefully, she keeps going that way.”

Sierra Farm's September consignment gets started with three Book 1 yearlings, led off by a colt by Tiznow (hip 83). The yearling is out of Sierra Squall (Grand Slam), a half to graded winner Bahamian Squall (Gone West) and a full to graded winner Apriority.

“The Tiznow is a really nice colt,” Callanan said. “His mom is a half-sister to the dam of [GII Best Pal S. winner] Collusion Illusion (Twirling Candy). He's been a really progressive colt. He's bit by bit gotten better and better and he is really starting to peak right now for the sale. I think he's really doing well.”

Also in Book 1, Sierra Farm will offer a colt by Ghostzapper (hip 424). The chestnut is out of the unraced Golden Flair (Medaglia d'Oro), a half-sister to Group 1 winner Stravinsky (Nureyev). His half-brother by Speightstown, Full Flat, sold for $250,000 at last year's September sale and broke his maiden at Kyoto Aug. 11.

“The Ghostzapper is a big, strong, good-looking colt,” Callanan said. “He is really nice. His brother won in Japan since the catalogue, so he has a bit of an update there.”

Rounding out the farm's Book 1 contingent is a filly by Malibu Moon (hip 443) out of Grade I placed Hot Storm (Stormy Atlantic).

“The Malibu Moon filly is outstanding,” Callanan said. “We have three in Book 1 and they are three really nice horses.”

Ed Hudon was founder of the Sierra Aluminum company and the couple began in the racing industry in California, focusing mainly on the track. They relocated to Kentucky in 2006 and began Sierra Farm. While Ed Hudon's focus remained in racing, Sharon will focus more on the breeding side of the industry, according to Callanan.

“We got a little big,” the manager explained. “Ed's passion was racing and we had a lot of horses on the track. So now we are just trying to get down to a more manageable number for Sharon. We did sell a few mares. If we can knock off two or three at the bottom and just try to be more aggressive culling mares, that's going to be our goal. And then down the road, race a filly or two, just to get down to more manageable numbers.”

The Sierra broodmare band currently numbers about 24 mares and, despite selling some last fall, the farm did make one addition at the Keeneland November sale.

“We bought a really nice mare named Scandalous Song (Unbridled's Song), in foal to Uncle Mo,” Callanan said. “She is a half to [champion] Stardom Bound. We bought her for $260,000 and she was a really nice young mare and already a stakes producer.”

Neither Bsharpsonata nor Mighty Renee have yearlings this year, but the two broodmares remain stalwarts of the Sierra band.

“Mighty Renee is in foal to Classic Empire,” Callanan said. “We have her daughter on the farm, too. Pauline Revere (Distorted Humor) is in foal to Into Mischief carrying her first foal. So we have the family well-covered here.”

Bsharpsonata, who Sierra purchased while carrying the seven-figure American Pharoah colt for $375,000 at the 2016 Keeneland November sale, produced a filly by Arrogate this year and is back in foal to Uncle Mo.

As for plans for the mare's Arrogate weanling, Callanan said, “I don't know–it's hard to look at her and think you'd keep her. She is worth an awful lot of money. She's absolutely beautiful. She is a big, tall filly. We'll run them through [the sales ring] and see what's happening. We are looking to be more commercial in our outlook going forward.”

And while Sierra Farm's plan is to be a commercial breeding operation, it still has six or seven horses in training. The group is led by Nessy (Flower Alley), who became the first graded stakes winner to carry the farm's colors when he won the 2018 GIII San Juan Capistrano H., as well as 2018 Iowa Sprint H. winner Done Deal (Macho Uno).

“We've had a pretty good racing year,” Callanan said. “We have Nessy–he won a race this year and he's going to run back in two weeks in Canada. So he is flying the flag and keeping the racing side of it going. And Done Deal is coming back, too.”

Asked if there was extra pressure to repeat last year's success at this year's September sale, Callanan laughed.

“Yes, yes,” he said while still laughing. “I told Sharon right after the sale last year, I said, 'Sharon I don't know if we've got a $1.4-million yearling next year.'”

He continued, “This year, I think we've got very nice horses. I don't have the sire power like I did last year. But you never know. When you get to the sales grounds and the horses start showing, you never know which ones will jump up and which ones won't. I've got a really good bunch top to bottom.”

The Keeneland September sale begins Monday with Book 1 sessions through Wednesday beginning at noon. Following a dark day Thursday, the sale resumes Friday at 10 a.m. and continues through Sept. 22.