Shotski Back in Training 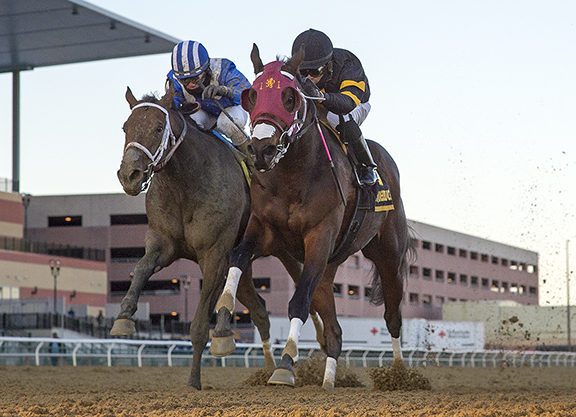 Last year's GII Remsen S. winner Shotski (Blame) traveled to Dubai only to ship back home again without racing when the G2 UAE Derby was canceled. He was given some time off after shipping back stateside, but is now back in training with Jeremiah O'Dwyer. The sophomore, who was second in the Feb. 1 GIII Withers S. and fourth in the Feb. 29 GII Fasig-Tipton Fountain of Youth S., is expected to return to the work tab later this week.

“I've given him a bit of down time after coming back from Dubai,” said O'Dwyer. “He's done a fair bit of traveling. He's had some turnout and he's been galloping. We might breeze him here later this week and see how he is.”

In addition to Shotski, who is unlikely to make the race, O'Dwyer also nominated maiden winners My Friends Beer (Stay Thirsty) and Amen Corner (Malibu Moon) to the May 2 GI Arkansas Derby.

“He's very nicely bred,” O'Dwyer said of the half-brother to champion female sprinter Shamrock Rose (First Dude). “We only paid $25,000 for him and he's a bit on the smaller side, but he's done nothing but mature. He's never run a bad race. Once he broke his maiden, he's steadily improved with every run and stretching him out seems to be a good thing for him as well.”

O'Dwyer continued, “He was third in a very good allowance race last week. He was a little outpaced before they turned in, but he stayed on well to the line and got up for third. He's one that would appreciate the mile and an eighth.”

Howling Pigeon Farms' Amen Corner, purchased for $70,000 at last year's Keeneland November sale, graduated in his second start at Laurel Park in January. He was fourth in a one-mile optional claimer at Oaklawn in his most recent start Apr. 11.

“The earnings would likely stop Amen Corner from getting into either of the divisions [of the Arkansas Derby], if they split, but at the same time I'd like to run one of them in the allowance race that day,” O'Dwyer said. “[Amen Corner] is not as hardened as My Friends Beer, even though I think there's very little between them ability wise. My Friends Beer is much more in the game right now, while Amen Corner will progress throughout the year.”