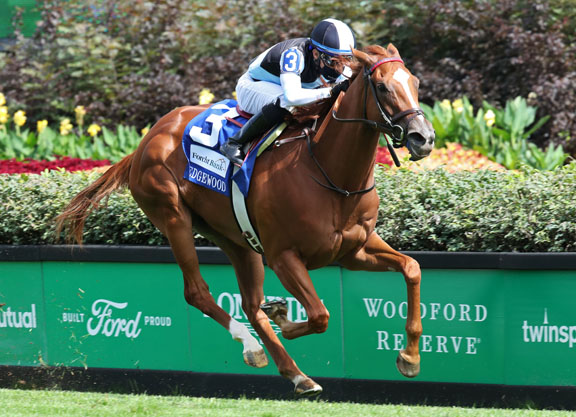 Talented 'TDN Rising Star' Sharing returned to winning ways back on this side of the pond as the public's pick. Beaten a neck in third in her Saratoga unveiling last July, the well-bred chestnut romped in a seven-furlong off the turfer there in August before justifying heavy 1-2 favoritism in Laurel's Selima S. in September. She was let go at 13-1 for the GI Breeders' Cup Juvenile Fillies Turf at Santa Anita Nov. 1, but the result was the same, and she picked up right where she left off when annexing the course-and-distance Tepin S. here May 23. Her connections opted for a sporting trip to Royal Ascot for the G1 Coronation S. June 20, and she gave a very good account of herself when second best behind Alpine Star (Ire) (Sea the Moon {Ger}), who has since been second in both the G1 Prix de Diane Longines and G1 Prix Jacque le Marois.

Avoiding some bumping between the foes to her outside at the start, Sharing showed good gate speed and perhaps a bit of eagerness as she kept In Good Spirits (Ghostzapper) honest through splits of :24.44 and :48.76. Ridden along by Manny Franco to confront the leader heading for home, she started to edge clear in midstretch and maintained a clear advantage under the line.

“She has tactical speed,” said Franco, who will look to carry Friday's momentum into Saturday's GI Kentucky Derby, in which he rides Tiz the Law (Constitution). “She broke out of there good and put me in a position where I wanted to go. After that, she knows how to get it done. She is so nice and has a really good turn of foot. She is very professional.”

This was the first Edgewood victory for trainer Graham Motion, who said: “I can't lie, I was pretty anxious about it because she was coming off a long trip and a long break. But she's so classy, she makes us all look good I think. She had a great work last weekend (7f in 1:26, 1/3 over the Fair Hill all-weather) and Manny gave her a perfect ride. It couldn't have set up any better quite honestly.”

As for what could be next, Motion said, “The only question I have in my mind is how far she wants to go. She obviously loves this distance. The next race would be 1 1/8 miles if we go to the [GI Queen Elizabeth II Challenge Cup Presented by Dixiana Farm Oct. 10] at Keeneland. I don't know if she wants to go that far, I don't know why she wouldn't, but she seems awfully good going a mile. I think the QEII is a race anyone with a good 3-year-old filly wants to go. I'm so tickled to get a race under her now because this makes it easier going forward now we've got this level of fitness. And I can't say enough about working with [Eclipse's] Aron [Wellman] and [Gainesway's] Antony [Beck]. I feel like we've called the right shots and it's because of them, they've never put any pressure on me.”

Sharing is one of 56 graded/group winners for super sire Speightstown, who was represented earlier this week by new 'TDN Rising Star' in Nashville. Her dam's signature win was a 46-1 upset of the GI Breeders' Cup F/M Turf going 11 furlongs over this same course. Shared Account has a yearling filly by Mastery and was bred back to Speightstown this season.