Seventh Sense a First for Turkey 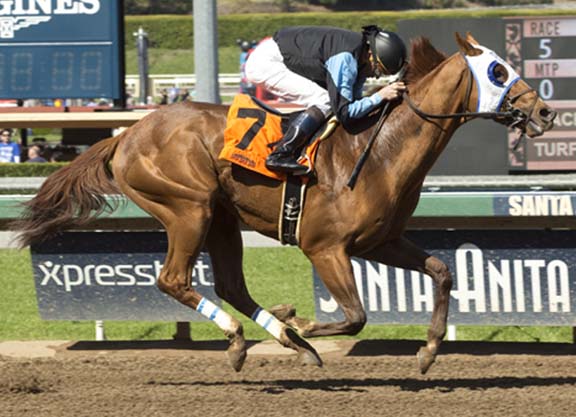 A Turkish-bred sophomore winning a race at Santa Anita might sound unlikely, but Seventh Sense obviously didn't read the script, zipping to a 2 1/4-length maiden victory on the Big 'Cap undercard in Arcadia Saturday. The chestnut colt, a full-brother to GI Breeders' Cup Turf Sprint runner-up Reneesgotzip, was purchased in utero for $110,000 at the 2012 Keeneland November sale by Omer Halim Aydin, bloodstock advisor to Turkish-based owner/breeder Arif Kurtel.

After her purchase at the November sale, No Dress Code (Distorted Humor) was shipped to Turkey, where she foaled her City Zip colt. The plan was originally for the mare to stay in Turkey, according to Murat Sancal, who trains for Kurtel at his base at Elmendorf Farm in Kentucky.

“The mare had a very classy filly, Reneesgotzip, who was sidelined when we bought the mare,” Sancal recalled. “And then Reneesgotzip came back after eight months and ran two really big races and was second in the Breeders' Cup. So we felt that the mare was too much for Turkey, so we brought her back.”

Seventh Sense was entered in the 2014 Keeneland September sale, but never went through the sales ring.

“Mr. Kurtel doesn't usually sell a horse,” Sancal said. “But when we brought the mare back to the U.S., we thought about trying to sell the colt. Then we decided not to sell and to take the risk and run. The original purpose was to bring him back to run, honestly.”

Seventh Sense's racing career got off to an inauspicious start when he faded to eighth after attending the pace as the 11-10 favorite in his Feb. 6 debut. Adding blinkers for his second outing Saturday, the colt sped to the lead and set fractions of :21.84 and :44.84 before kicking away for an authoritative victory.

“We always had big expectations for the horse, but he didn't run like that the first time,” admitted Sancal. “Mr. Kurtel was good to wait and give the horse time. And the second time he ran, we didn't expect that that big a race was going to come, but he was very different from his first race. The field was very tough and he beat those horses impressively. He ran huge. Hopefully, he will get better after that.”

Kurtel, who is in the coal-mining business in Turkey, has about 200 horses in his native country and boards some 15 broodmares with Sancal at Elmendorf. The Kentucky band includes No Dress Code, who, an hour after Seventh Sense's win at Santa Anita Saturday, foaled a full-sister to Reneesgotzip.

Kurtel's broodmare band also includes Common Hope (Storm Cat), the dam of champion Shared Belief (Candy Ride {Arg}). On behalf of Kurtel, Aydin purchased Common Hope, carrying a full-sibling to the 2013 juvenile champion, for $125,000 at the 2011 Keeneland November sale. That in utero foal was born in Turkey and named Lady Candy. She never raced, but she, too, is one of the Elmendorf residents.

“She was with Jerry [Hollendorfer] for some time and she was with me training,” Sancal said of Lady Candy. “She was a very talented filly, but we decided to breed her. She was bred to Tapit this year.”

“She arrived just 10 days ago,” Sancal said of the unnamed juvenile. “She is pretty smart. When you hear a Turkish-bred, people think it's a small country and maybe the horses are not really good looking, but this filly is really looking very smart and handsome. So far, she is very easy to train and she looks like she has some ability.”

As for Common Hope herself, Sancal added, “She is also in Kentucky. She is due anytime. She caught with a colt, so if everything goes right and she foals ok, it will be a full-brother of Shared Belief. She was due yesterday, so we are expecting her to foal anytime.”

As for what is next for Seventh Sense, believed to be the first Turkish-bred to win in the U.S., Sancal said, “We talked to Jerry, he is the one who will schedule the next run, but he was talking very positively about him.”