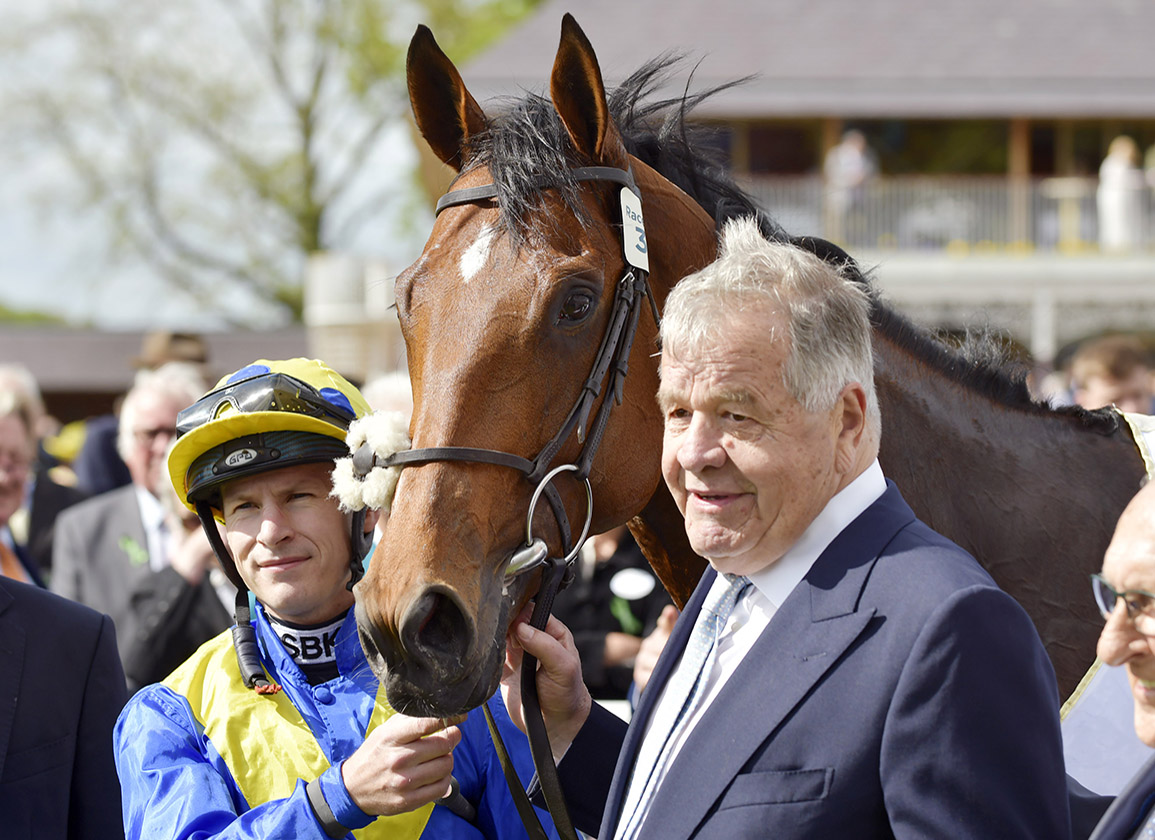 Can we have too much of a good thing? When it comes to racing in the spring the answer is almost certainly not, but the rapidity with which all the decent action takes place can make it difficult to take it all in. For example, in the last 11 days we have had three Derby favourites. First the horse who had held that honour all winter, Luxembourg (Ire) (Camelot {GB}), who was then replaced by his stable-mate Stone Age (Ire) (Galileo {Ire}), all the rage after his Derby Trial victory at Leopardstown following the defection of Luxembourg from Epsom. But Stone Age held his position for only four days before he was pipped by the Dante S. winner Desert Crown (GB) (Nathaniel {Ire}), about whom the dogs had apparently been howling that Sir Michael Stoute was on his way to claim the Derby for a sixth time, 41 years after Shergar (Ire) galloped his way into the history books.

By Derby day itself, Piz Badile (Ire) (Ulysses {Ire}) will almost certainly shorten merely for the fact that Frankie Dettori has been booked to ride him, but there is plenty to suggest that he would not be unworthy of that support. We'll see.

In the meantime, thoughts have turned to the Prix du Jockey Club, a great stopgap between the Guineas and Derby since its distance was shortened to 2,100m back in 2005. On Sunday, Charlie Appleby said of his Poule d'Essai des Poulains winner Modern Games (Ire) (Dubawi {Ire}), “I always had it in the back of my mind that he might be a French Derby horse.” With that colt having become the first British-trained winner of the race for 17 years, it would be no surprise to see him attempt to emulate the last one, Shamardal, by snaring a French Classic double. It would also help to alleviate one problem faced by Appleby in attempting to keep Modern Games, Coroebus (Ire) (Dubawi {Ire}) and Native Trail (GB) (Oasis Dream {GB}) apart. But let's face it, as problems go, it's high on the first-world list.

Jean-Claude Rouget has also been waxing lyrical about the Prix des Suresnes winner Al Hakeem (GB) (Siyouni {Fr}), drawing flattering comparisons to Sottsass (Ire), and seemingly not just for the very similar pattern of his breeding. Then there is the good-looking Lassaut (Fr), from the first crop of Jockey Club winner Almanzor (Fr), whose running-on fifth in the Poule d'Essai des Poulains can be regarded as a decent trial for June 5.

It would also be folly to overlook the claims of G2 Prix Greffulhe winner Onesto (Ire), the colt by Frankel (GB) who returned to Europe after being an unlikely candidate for a Florida breeze-up sale. But he breezed with ease, earning himself a $535,000 price tag and a place in Fabrice Chappet's Chantilly stable. We'll be hearing more about Onesto later this week in TDN, but a viewing of him during Chappet's second lot on Monday morning was enough to leave a strong impression that he is a horse with a perfect temperament for the big day.

The indefatigable Gerald Mosse, impeccably bedecked in his trademark white gloves and a silver brooch of two horses' head at the collar of his silks, rode his 15th French Classic winner at Longchamp on Sunday. It was his first since winning the Prix du Jockey Club on Reliable Man (GB) in 2011.

Of his latest, Mangoustine (Fr) (Dark Angel {Ire}), he said, “She really kicked strongly and fought all the way to the line. She kept something in the pocket for the end.”

Mangoustine was not the only one. The 55-year-old jockey has already passed the necessary exams to start a secondary career as a trainer but, understandably after the elation of his second win in the Poule d'Essai des Pouliches following Zalaiyka (Fr) (Royal Academy) 24 years ago, he said thoughts of retirement are far from his mind.

“For now I'll keep my training licence in my pocket,” added Mosse.

Somewhat unusually, four of the top five lots at last year's Arqana Breeding Stock Sale have remained in training this season, and three of them have enjoyed a real purple patch of late.

On Saturday, Rougir (Fr) (Territories {Ire}), the sale-topper at €3 million, made a triumphant comeback in her new home country of America, where she was the impressive victrix of the GIII Beaugay S. for Peter Brant, Michael Tabor and trainer Chad Brown.

Brant and Brown also teamed up with Speak Of The Devil (Fr) Wootton Bassett {GB}), a €1.95 million purchase, to win the GII Longines Churchill Distaff S. on the Kentucky Derby undercard. Meanwhile Grand Glory (GB) (Olympic Glory {Ire}), now six, has remained in training in France with Gianluca Bietolini for her new owner Haras de Hus, and she has added the Listed Prix Zarkava and G3 Prix Allez France to her tally of wins this season.

It would be churlish to present a round-up of the action of the past week and not mention the mighty Stradivarius (Ire) (Sea The Stars {Ire}), who won his third G2 Yorkshire Cup. It seems extraordinary that the horse who last week set a new European record for the number of Group wins (18) should have an invisible question mark hanging over him with regard to his future stud career.

Too small and the wrong colour for a National Hunt stallion, some say, but frankly that option shouldn't even be in the reckoning. Wouldn't it be refreshing if a son of one of the best horses most of us have ever seen, from a Wildenstein dynasty deep with talent, who has proved his own abundant ability and soundness year after year, be afforded the respect he deserves by Flat breeders. After all, who among us would not love to race a horse such as this?

Too much to ask? Let's hope not.

Two years ago we noted the Danish Classic double of Tassmania (Den), the filly whose existence is largely owing to her dam Transsylvania (Den) (Le Havre {Ire}) having won a nomination to Sir Percy (GB) as part of her prize for landing the Listed Lanwades Stud S. in Norway in 2015.

Transsylvania's owner/breeders Dean and Mette Olsen duly bred her to Sir Percy, resulting in victory in the Danish 1000 Guineas and 2000 Guineas for her daughter Tassmania. Now the family is at it again.

Transsylvania's current 3-year-old Titannia (Den), by Appel Au Maitre (Fr), won the Danish 1000 Guineas on May 7 and is now poised to attempt to emulate her half-sister by taking on the colts. The filly, who was retained by the Olsens, also provided Lars Kelp with his first Classic victory since returning to the training ranks with just five horses under his care.