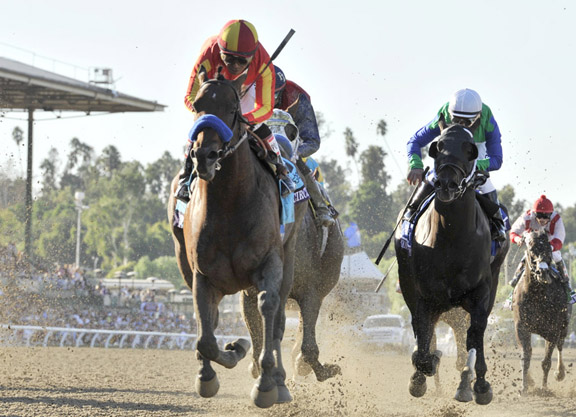 Secret Circle (Eddington–Ragtime Hope, by Dixieland Band), who achieved the rare feat of winning multiple Breeders' Cup races, will relocate to Michele Rodriguez's Elite Thoroughbreds in Louisiana, it was announced Monday. The deal was brokered by Chad Schumer of Schumer Bloodstock.

Trained by Bob Baffert, Secret Circle was perfect in three starts at two, capped by a victory in the Breeders' Cup Juvenile Sprint, but successfully carried his speed around two turns at three, winning the GIII Southwest S. and GII Rebel S. before finishing second to stablemate Bodemeister (Empire Maker) in the GI Arkansas Derby. Kept around one turn for the balance of his career, the bay added the 2013 GI Breeders' Cup Sprint and was runner-up in defense of that title the following year. Also second in the GI Cigar Mile H., he closed his career with a success in the G1 Dubai Golden Shaheen. He won half of his 16 trips to the post for earnings of $3,670,790, making him one of the richest horses to ever stand in the state.

Secret Circle is the sire of 13 winners to date, including the stakes-placed Woopigsooie and Reach the Circle, runner-up in the 2019 Louisiana Futurity.

“Secret Circle presents and unprecedented opportunity for Louisiana breeders to use a Breeders' Cup Sprint champion who is in what may be the deepest crop of freshman sires we've seen in years,” Schumer said.