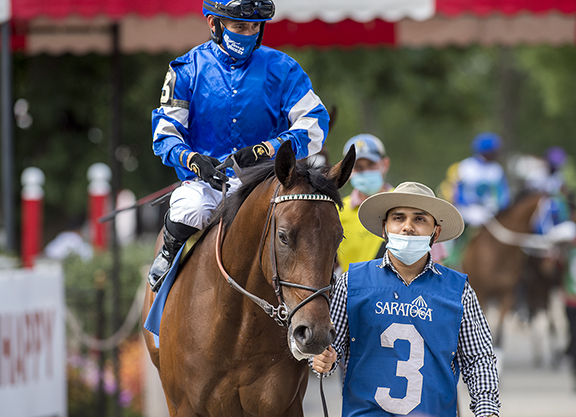 How much buzz was there ahead of Speaker's Corner (c, 2, Street Sense-Tyburn Brook, by Bernardini)'s debut run on closing day at Saratoga?

Not off to the sharpest of beginnings from post two, Speaker's Corner raced on the inside in some traffic and was urged along by Junior Alvarado in seventh through an opening quarter in :22.39.

Still with plenty to do approaching the quarter pole, he was tipped out off the turn for home and finished with interest down the lane to just grab third, beaten 6 3/4 lengths by good-looking second-time starter Team Merchants (Nyquist).

Speaker's Corner earned a 59 Beyer Speed Figure for the effort.

Speaker's Corner was produced by an unraced daughter of GI Breeders' Cup Distaff heroine Round Pond (Awesome Again), a $5.75-million acquisition by Sheikh Mohammed's operation at the 2007 Fasig-Tipton November Sale.

“As with most first-time starters, he was quite green,” Godolphin President Jimmy Bell said. “Hopefully, he got some needed racing experience and we look forward to seeing him stretch out in the not-too-distant future. He's shown above average ability throughout most of his works. Time will tell.”

Speaker's Corner has returned to the worktab since his unveiling with a pair of moves over the Oklahoma training track, including a five-furlong breeze in 1:02.89 (7/9) Sept. 25.