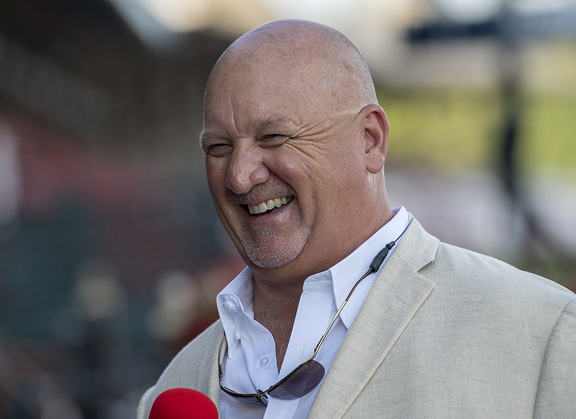 Salit (f, 3, American Pharoah–Scherzi, by Brahms) came flying home from far back to complete the trifecta in her promising unveiling over the Gulfstream lawn Sunday (video).

Some early trouble and a wide journey around the second turn weren't the only factors working against her that day.

“I really think she probably should've won first time out,” trainer Ken McPeek said. “She ended up with a cut in her mouth post race. We're not sure when or how, but it happened, and she'll need a little time for that to heal. It made [jockey] Jose Ortiz's job difficult. He did a good job just getting out of her what he did. Lots of ways to get beat. That is a very talented filly.”

The Lee Pokoik colorbearer had a trio of bullets on her worktab in Hallandale, including a five-furlong move in 1:00 (1/6) Jan. 12, and was well-backed at 4-1 from a 12-1 morning-line quote.

Salit took an early bump and was checked shortly after the start. The chestnut was a bit of a handful thereafter, tossing her head and fighting Ortiz some as she caboosed the field of 12 heading into the clubhouse turn.

No fewer than 15 lengths back through fractions of :23.54 and :47.87, she finally re-entered the picture as they rounded the far turn and quickly caught the eye with a four-wide blitz.

Widest of all and right in the mix as they straightened for home, Salit continued to roll down the center of the course in the stretch and came within 1 1/4 lengths of the winner Joy of Painting (Munnings).

Salit clocked her final quarter in easily a field-best :22.78 and earned a 60 Beyer Speed Figure for the effort.

“I needed to keep Lee Pokoik's fillies split, but I think she'll handle the dirt no problem, too,” McPeek said of Salit. “She's done everything right. We're pretty excited about her. We'll get her mouth fixed up–maybe a week to 10 days–and let that heal. She should be locked and loaded next time out.”

Hailing from the second crop of Triple Crown winner and promising young stallion American Pharoah, Salit brought $175,000 as a Keeneland September yearling. Her 15-year-old dam Scherzi, a half-sister to GI Spinaway S. heroine So Many Ways (Sightseeing), was a 12-time winner and made 40 career starts. Salit was bred in Kentucky by John R. Penn.