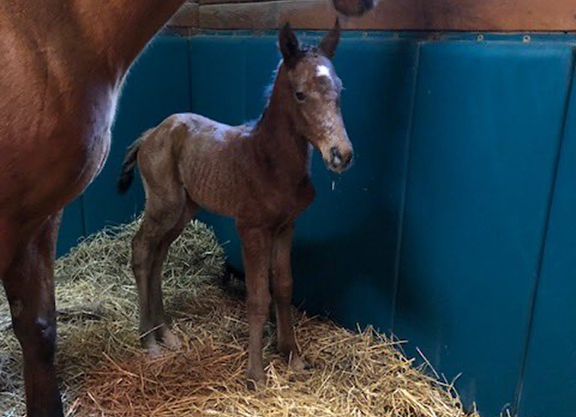 Sheriff Bianco (c, 2, by Speightster–Summer Rules, by Perfect Soul {Ire}), a strong second after a tardy beginning and wide trip on debut for trainer Wesley Ward at Churchill Downs May 22, will look to earn his diploma at the prestigious Royal Ascot meeting.

Drawn on the extreme outside in post 11 going 4 1/2 furlongs over the main track beneath the Twin Spires, the Qatar Racing colorbearer was off a beat slow and rocketed his way forward with an eye-catching, three- and four-wide blitz to stick his head in front as they hit the quarter pole. Head and head with the well-meant firster Cowan (Kantharos) and looking a serious threat, Sheriff Bianco couldn't quite keep pace down the lane after his early efforts and had to settle for second, 2 3/4 lengths adrift the 3-5 favorite.

“Surprisingly for one of Wesley's, he broke last out of a field of 12 and rushed up and probably used up a lot of energy getting to the front. It looked like maybe turning in he was going to go on. But I think that middle quarter of the race probably hurt him a bit, I'd say.”

Sheriff Bianco made the trip across the pond Tuesday evening and will target either the G2 Norfolk S. June 19 or the Listed Windsor Castle S. June 17 for his grass debut.

“Sheikh Fahad met Wesley at the airport while he was leaving [last year] and told him to find him a yearling that could possibly go to Ascot,” Galvin said. “Wesley shortlisted four of five–he goes for a certain type–and he was the one we landed on. He was a lovely horse.”

Bred in New York by SF Bloodstock, LLC, Sheriff Bianco went through the ring twice, bringing $135,000 from Rascal Bloodstock as a KEENOV weanling and $120,000 from Fergus Galvin, agent, as a KEESEP yearling. Hailing from the first crop of freshman sire Speightster, Sheriff Bianco is a half-brother to two-time stakes winner and Grade III-placed Never Gone South (Munnings). He was produced by a half-sister to MGISW Peace Rules (Jules).