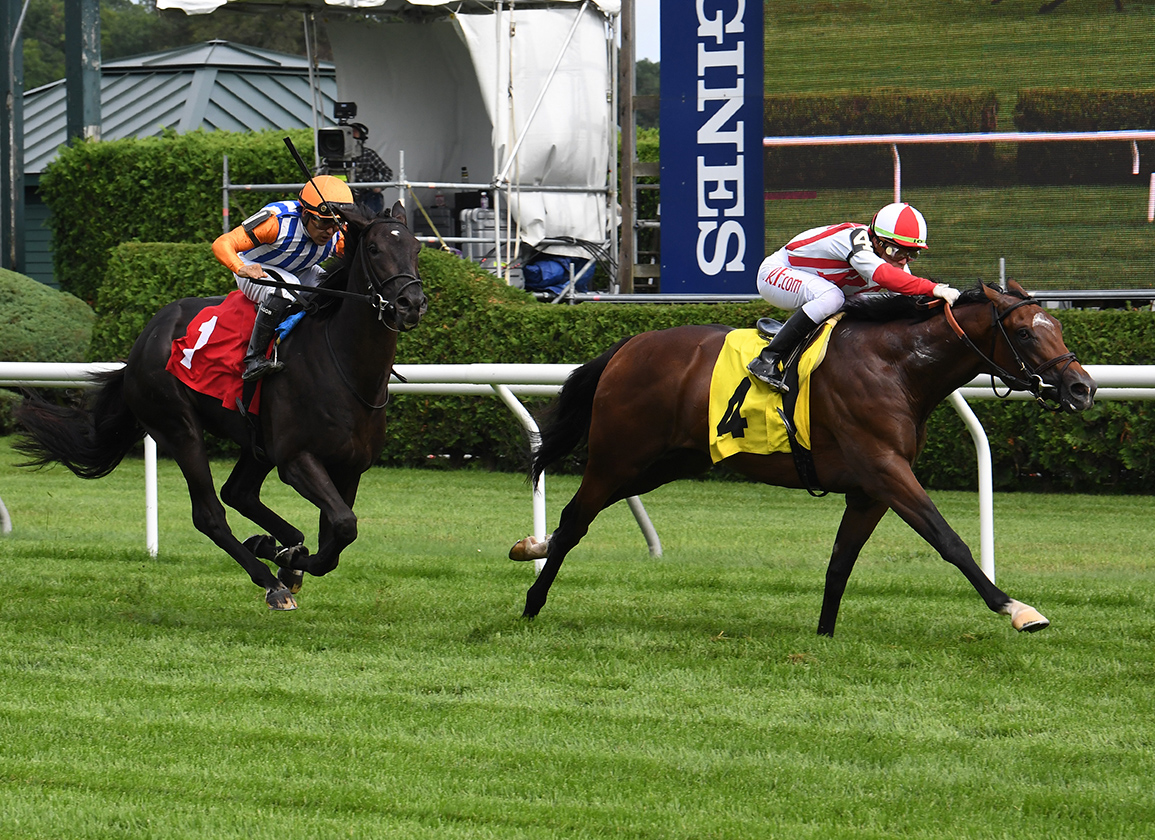 It was a tale of two trips with James Aloysius (c, 2, More Than Ready–Olorda {Ger}, by Lord of England {Ger}) having to settle for an educational second on debut behind the well-meant firster Portfolio Company (Kitten's Joy) going 1 1/16 miles over the Saratoga lawn on opening weekend (video).

Off at 4-1, the rail-drawn dark bay brushed with a rival just after the start, and, after slightly tapping on the brakes in some early traffic passing the stands for the first time, settled in sixth beneath Luis Saez as the aforementioned favorite stalked in second behind easy fractions of :25.15 and :50.86 over the “good” going.

James Aloysius began to launch a flashy, three-wide blitz on the far turn as the Chad Brown-trained Portfolio Company enjoyed first run and hit the front at the top of the stretch. James Aloysius continued to rally nicely in the lane despite repeatedly getting in and cut the final margin to 3/4 of a length. He earned a 71 Beyer Speed Figure for the effort.

“He's a nice colt, just a little green,” trainer Danny Gargan said. “I'm not really a first-time starter kind of person. We told the jock to break and get a good position and just make sure that he's running turning for home. Luis said if he had hit him left-handed instead of right-handed, he would've won the race. He just shied from it, and got on top of those other horses for a minute. He's a pretty talented colt.”

He continued, “Chad told me probably six weeks before the race that the Kitten's Joy was a nice horse and that he thinks he's gonna be a really good horse. He's really high on him. So, hopefully we'll be around somewhere in the fall.”

Bred in Kentucky by Martin Schwartz, James Aloysius is the first foal out of Olorda, a two-time Grade III winner in the U.S. and a Group 3 winner in France. She was also third in the 2015 G1 Pour Moi Coolmore Prix Saint-Alary. James Aloysius brought $200,000 from Oracle Bloodstock, agent, on behalf of West Paces Racing LLC at last year's Keeneland September sale.

“He's named after the owner [Larry Connolly]'s brother who passed away and another friend of theirs,” Gargan said. “One of them was named James and the other's last name was Aloysius.”

As for what's next for the equine James Aloysius, Gargan said, “I don't run back fast–I run every seven-eight weeks. We're probably gonna aim to get a race into him towards the end of the meet. Hopefully, if everything goes as planned, that's what we're shooting for.”

Gargan concluded, “We like him a lot. I'm pretty lucky this year. We have a little better stock than we normally do baby wise, so that's exciting.”