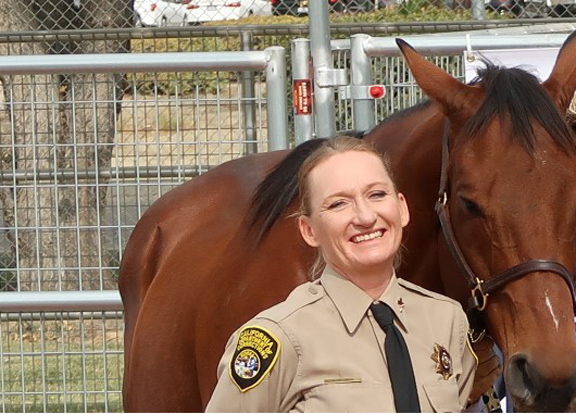 Heidi Richards is a lifelong horsewoman and rancher. She grew up riding, and at age 16, began working at a Thoroughbred training center. Since that time, Richards has re-trained and transitioned more than 100 off-track Thoroughbreds.

When Richards moved to Coalinga, California, a city in Fresno County and the western San Joaquin Valley, for college, she began a 10-year career at Harris Farms where she worked in every aspect of the breeding and training of Thoroughbreds. Her career on the farm ended when Richards began to feel conflicted about the long hours at work away from her child.

“It was breeding season and my son was three and I was working 100-hour weeks,” said Richards. “I really wanted to be a hands-on mom, so I needed to make a change. The only place close by that paid well was the prison. I planned on staying at the prison for 10 years and then going back into horses.”

That was 17 years ago. Since making the transition, Richards has been a full-time correctional officer at the Pleasant Valley State Prison. Not long into her career, Richards began to think about ways to help the inmates break the on-going cycle of recidivism.

“I started asking them why they keep coming back,” said Richards. “The answer was always that they didn't know anything else in life.”

That got Richards thinking about a horse program. Her first idea was to start a program for mustangs, but it required permanent fencing and more space than she had. In her research she found the Thoroughbred Retirement Foundation Second Chances Program.

“When I found the TRF program, I immediately starting calling them and working with my superiors to get it done,” said Richards. “I had the support, but not the funding.”

Richards did not give up and found an opportunity through the California Department of Corrections and Rehabilitation Innovative Programming Grants in California Prisons program. Richards met with West Hills Community College District and worked tirelessly to put together a unique partnership and secured a three-year grant for $300,776.

“It was a dream come true after four years and 10 months of hard work,” said Richards. “Of the 52 grants issued, they said that this one was the best one. That is because the program is so good. It is also an excellent example of private-public partnership because I couldn't have done it without the support from the Thoroughbred Retirement Foundation Second Chance Program, Harris Farms Horse Division, and West Hills Community College.”

Pivot now to a horse program in a prison in the California hills. The entire structure: paddocks, barns, classroom etc., are all within the high security fence. In other TRF programs, the horse farms are outside of the fence and sometimes a short drive away. In those programs, at least one extra security person is needed to oversee the inmates. This can cost more than $50,000 to $75,000 per year. Therefore, having the program within the security fence saves the prison money. There is another interesting benefit to this set-up.

“Other inmates can watch the program and see the horses from a safe distance,” said Reid McLellan of The Elite Program, who provides Richard's curriculum and teaching tools as he does for other Second Chances facilities. “The Second Chances program in California is unique in a number of ways. The Groom Elite Program course is actually taught through West Hills Community College, which allows participants to receive college credit. The arid climate presents unique challenges requiring more hands-on care plus management techniques used by horse farms in that area. And, Harris Farm provides ongoing support plus sends horses for rehabilitation if necessary and retraining.”

“Richards, a certified Second Chances Groom Elite instructor, is a very accomplished horsewoman and rancher that brings a great perspective about people and livestock to this program. Kudos to her for making this happen and providing another model whereby Thoroughbreds and people in need are brought together.”

The results reported so far are positive in every respect.

“I am constantly amazed at how all 15 men are so moved by the horses,” said Richards. “I have their complete attention at all times and they take their responsibilities very seriously.”

The program is 18 weeks long with five horses and 15 men. One graduate is assigned to feeding the horses on weekends and overseeing their care when Richards is off.

On July 8, Richards was named the 2020 Correctional Officer of the Year by the California Department of Corrections and Rehabilitation for her effort in spearheading the Pleasant Valley State Prison Equestrian Program.

To learn more about the TRF's Second Chances Programs, go to www.trfinc.org.