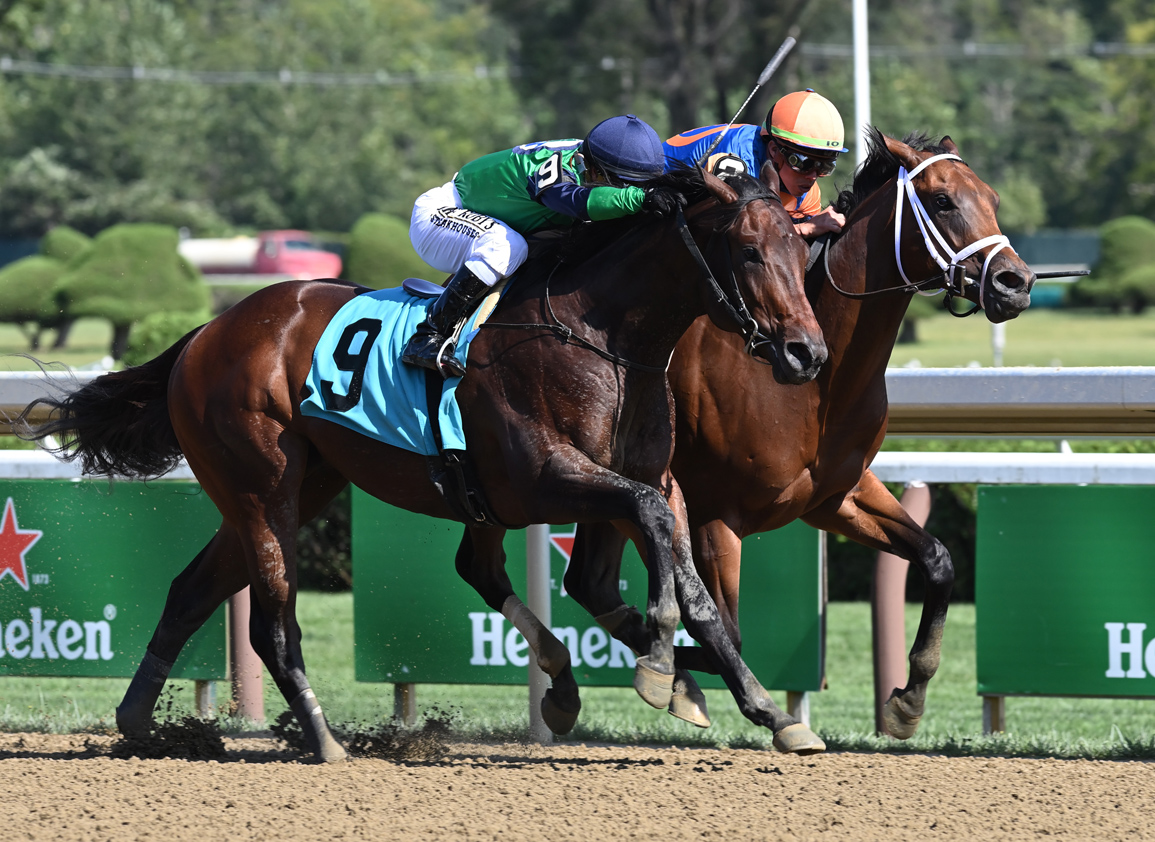 Don't Wait Up (outside) | Susie Raisher

Nominated to Monday's GI Hopeful S. after a too-good-to-lose second on debut at Saratoga Aug. 14, Don't Wait Up (c, 2, Upstart–Lovely Marissa, by Proud Citizen) will instead return in a maiden special weight on the closing day card.

Given a 7-1 chance to win at first asking going six furlongs, he was away last of 10 from post nine after veering in and bumping with a rival at the start.

The bay was on the move beneath Javier Castellano to race in an outside fifth through an opening quarter in :22.27 and made an eye-catching, four-wide bid to challenge for command approaching the quarter pole.

He set his sights on the pacesetting Power Agenda (Nyquist)–entered in a loaded renewal of the Hopeful–as they straightened from home, and, after racing shoulder to shoulder with that game rival down the stretch, just came up a nose short with heads bobbing up and down on the line. Don't Wait Up earned a 76 Beyer Speed Figure for the effort.

Don't Wait Up returned to the worktab with a four-furlong breeze in :48.12 (7/42) over the Oklahoma training track Aug. 28. Trainer Tony Dutrow has quietly enjoyed a nice meeting from limited action at the Spa, sporting a record of 12-3-4-2 at the stand.

“He's always trained very good and then he came up here to Saratoga for his first race and he ran very well,” Dutrow said. “We were very happy with him.”

He continued, “Personally, I like when some adversity happens– dirt hits them in the face, they're among horses, etc.–in a first-time starter's race. The more experience they can get out of their first race, the more they're gonna put that to use in the future.”

Bred in Kentucky by Brereton C. Jones, Don't Wait Up brought $200,000 from Bluewater Sales, agent, on behalf of Cypress Creek Equine after firing a :9 4/5 bullet from the Woodford Thoroughbreds, Agent CLV, consignment at OBS April. He previously was a $1,500 KEENOV weanling and a $23,000 OBSJAN short yearling. Don't Wait Up is the second foal out of the winning mare Lovely Marissa, a daughter of GI Spinaway S. third and blowout Saratoga debut winner Valiant Passion (Lion Heart).

Don't Wait Up takes on a full field of nine rivals going six furlongs for his second start.

“The first time horses run, it can be a very overwhelming experience for them, but Don't Wait Up took everything very well,” Dutrow said. “He certainly learned a great deal and went through a lot in the race. He came out of it very good, we gave him a workout back, and we're looking forward to getting him back out there on the track. We'll just have to see what exactly became of his experience in his next race Monday. It's his second start and we'll take it from there.”